Treyarch have released a new trailer showcasing the Nuketown map coming to Call of Duty: Black Ops 4 tomorrow, providing you are a Playstation 4 owner.  Xbox One and PC gamers will have to wait just a few more days for it’s release on 20th November.  Enjoy the tour around the new Nuketown below… 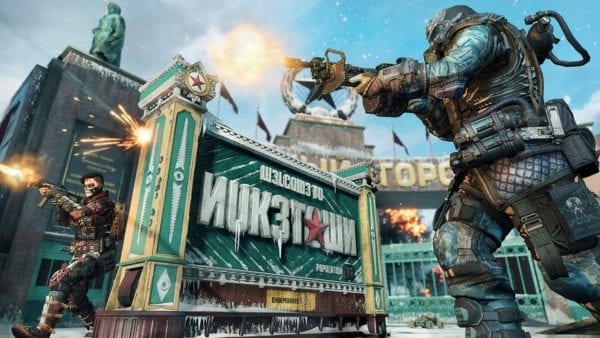 Nuketown is one of the most iconic maps in the Call of Duty franchise and it will be a welcome addition for players to enjoy.  Treyarch had hinted that the new Nuketown would be set in Russia but thanks to the new trailer we can see the snow covered Russian town with it’s Cold War era theme in all its wintry glory.

The re-imagined map, although still small and compact, will still provide more than its fair share of the hectic action that has made this multiplayer map so hugely popular with fans.

This fan favourite map will be available for FREE on PS4 tomorrow and on Xbox One and PC on 20th November.

Black Ops is back! Featuring gritty, grounded, fluid Multiplayer combat, the biggest Zombies offering ever with three full undead adventures at launch, and Blackout, where the universe of Black Ops comes to life in one massive battle royale experience.