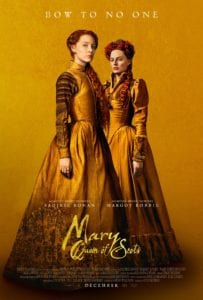 Mary Stuart’s attempt to overthrow her cousin Elizabeth I, Queen of England, finds her condemned to years of imprisonment before facing execution. 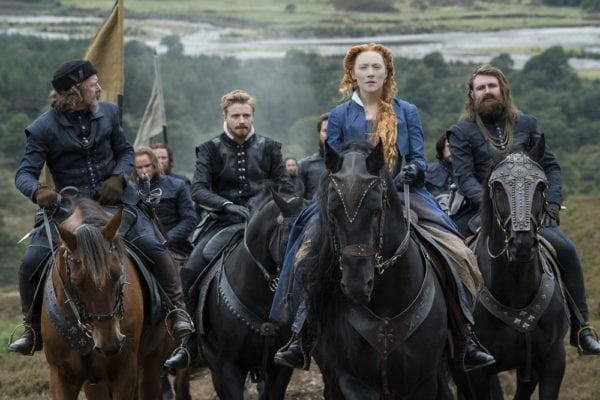 Mary, Queen of Scots is adapted from John Guy’s book Queen of Scots: The True Life of Mary Stuart, but it’s clear that first-time director Josie Rourke and scribe Beau Willimon (also a playwright, which makes sense because much of the film’s pacing and dialogue feel made for television even if they are executed with wonderful craft behind and in front of the camera) are taking some creative liberties, specifically with the rumor and speculation that 16th century cousins Mary and Queen Elizabeth did eventually once have an in-person meeting.

I don’t think it’s a spoiler to mention that such a thing does occur at the climax (it’s all over the trailer, no restraint whatsoever), but as for the topics of the conversation, along with what leads to it and how it occurs, those are fascinating to watch unfold in this biopic that certainly plays it safe most of the time, but is committed and calculated at illuminating regional female power and how their rulership differs from men, juxtaposing two power-struggling queens, one leading with tenderness, empathy, and compassion, with the other succumbing to paranoia and constantly scheming underhanded tactics to maintain control.

Even moderate history buffs likely know which is which; Saoirse Ronan portrays the eponymous Mary Queen of Scots, piercing blue eyes seemingly letting us all we need to know regarding her next decision. The Irish actress turns in a strong Scottish accent, but it’s the depth of which the character is drawn that makes her stand out, from her defiance to remain independent but seek out true love on her own terms (the narrative begins as she returns home from Scotland at age 18 following the death of her kingly French husband), to her attempts to make tolerate Protestants even as a maligned Catholic Queen, to the numerous acts of forgiveness (decisions that anyone and everyone will quickly realize are going to come back and bite her hard) she commits, to her misplaced optimism that she will come into face-to-face contact with Queen Elizabeth (Margot Robbie, in what is easily one of the best performances of her career so far, and not just because she is able to put on a believable British accent but more to the fact that she plays into the anxieties and paranoia of this real-life persona with subtlety and conniving manipulation rather than putting on some out of place scenery chewing) resolving their issues to join one another in royal sisterhood.

She is a complex figure; both a person that displays ruthless ambition yet a softer side filled with understanding. Not to mention, aware that her very existence (the opening text clarifies the family tree) is a threat to the crown, she is also wise to Queen Elizabeth’s plans to snatch away her right, which know no boundaries in terms of moral bankrupt behavior (the first act sees her sending the man that so desperately wishes to be her partner, Robert Dudley as played by Joe Alwyn, to marry Mary with the intentions of keeping her on a leash per se). There is also the sensation that because Mary does have memorable interactions with the supporting cast, by extension, we have a little more investment in their fates. 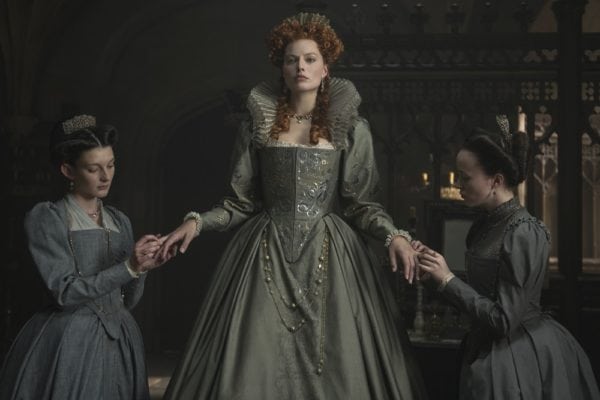 What separates Mary, Queen of Scots apart from the majority of biopics that seemingly run through notable events sprawled out over a few years worth of time (although the ending takes place 15 years later from the film’s starting point) is the intensity from the sequences along with receiving not just a female perspective, but also one directed by a woman. Mary, Queen of Scots does have some fine production values (the wardrobes are exquisite, candlelight flickers add atmospheric immersion, and the cast is obviously first-rate) but there’s no denying when it comes to things such as a rather lame battle sequence, the budget is limited. However, such a thing is also easily overlooked when one is more concerned with further getting into Mary’s head over the weak slice of the action. The film may start slow but quickly picks up with plot development after plot development so rapidly and so excitingly that it’s easy to become surprised when the film turns out to be something you may not have expected during the final 20 minutes. Let’s just say it’s rather heartbreaking.

A case could be made that there could be a few scenes of the impotent men trying to control the women from behind the scenes cut (David Tennant plays a hilariously fake looking long-bearded fellow shouting and ranting regarding Mary being unsuitable for leadership due to her Catholic roots) in favor of fleshing out Queen Elizabeth more, but ultimately, when the two meet, the fireworks pop. Mary, Queen of Scots gives us a pair of 2017 Best Actress nominees going at it like rivals with the tragedy being they might not even know why. So much happens from a character standpoint here that reverberates with meaning throughout our current modern-day societal landscape, that it propels a good biopic into a great one; Saoirse Ronan’s final speech comes along and sticks the landing.