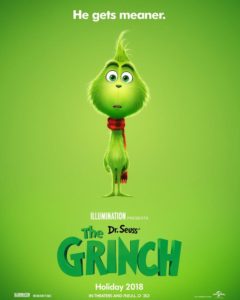 A grumpy Grinch plots to ruin Christmas for the village of Whoville.

Illumination Entertainment’s latest Dr. Seuss adaptation – Christmas classic The Grinch – is a delightful kid-friendly holiday treat. Adult-friendly, as well. Mr. Grinch may be a mean one, but Benedict Cumberbatch’s personification is the least darkened of all. His a Grinch boasting denser (albeit brief) backstory development- a reason for hating Christmas – yet more exuberant twinkles of pleasure. Jim Carrey will always be remembered for donning Dr. Seuss’s grouchy green costume, expressive in ways Cumberbatch’s CG avatar dreams if only to remind how different a take Illumination shapes. Brighter, chirpier, and stuffed fat with a whole lot of neatly-wrapped holiday cheer.

Dr. Seuss penned a tale about How The Grinch Stole Christmas, but Illumination dares to ponder “Why?”

You know the story. Mr. Grinch – who lives above Whoville in a mountaintop hideaway complete with Batcave-like workshop – despises Christmas. This year especially mounts dread when the Mayor of Whoville (Angela Lansbury) orders seasonal celebrations be tripled in size. Grinch plans to imitate Santa Claus, infiltrate Whoville homes, and steal every last remnant of Christmas joy until the town is cheerless. He doesn’t care about wide-eyed children like Cindy Lou Who (Cameron Seely) and their Xmas wishes, as unselfish they might be. All Grinchy can think about his one fateful holiday spent in an orphanage with no parents, no presents, and only the memory of being completely alone on Christmas. 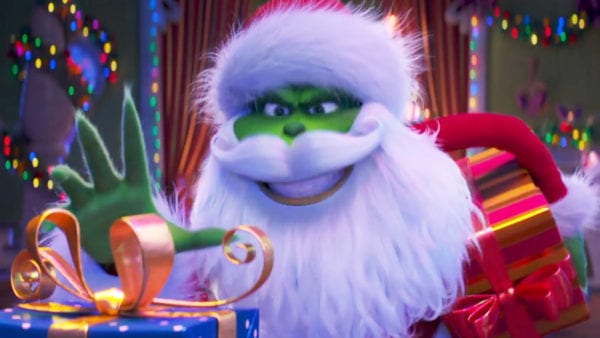 As expected, Illumination’s Grinch undergoes a restoration to appease sight gags and relevance. Grinch enjoys his coffee every morning with a creamer sad face artwork, shakes his bum in bright pink aerobic stretchy pants – the usual Minions-brand humor. Although, Cumberbatch doesn’t allow Grinch to become a donkey for pin-the-tail puns. His daily routine with super-pup Max is a constant catalyst for joy as the two scheme and invent and share helicopter-helmet hijinx with all-ages entertainment value. This year may not bring the most “theatrical” Grinch, but personality benefits this hairy Scrooge whether he’s filling emotional voids with meatballs or stricken silent by the unwavering spirit of singing Whoville citizens.

Today, more than ever, can we ignore a film that toasts “To kindness and love, the things we need most?” The Grinch soothes and charms through its tenacious ability to shine beckoning beacons of happiness. Cindy Lou ever the scene-stealing bundle of curious childhood good-will (her “wish” a warm Hallmark blanket), Mr. Grinch the devious meanie with far more admissions of niceties than we might expect. Dr. Seuss gets “illuminated” once again, and while it’s not always the deepest cut into holiday loneliness or outcast pain (some jokes more kiddie-tuned, as well), The Grinch is sure to please giddy families who stand Christmas trees upright immediately after trick ‘r treaters snag their last fun-sized candy bar.