Kieran Fisher takes a look at some entertaining films about killer toilets and faecal matter…. 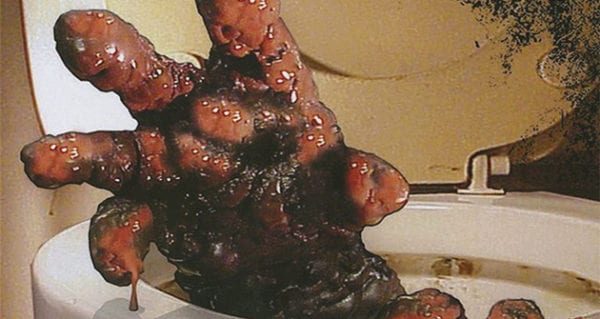 First and foremost, World Toilet Day should be commended for raising awareness of and inspiring people to tackle the global sanitation crisis – a topic often neglected and overlooked in the grand scheme of things, but one which poses serious health risks and endangers the lives of 2.4 billion people across the world who are struggling because they don’t have access to a clean toilet.  It’s a serious issue, and – without sounding preachy – one that world governing bodies and health organisations should unite to resolve.  Therefore, the lighthearted and downright silly nature of this isn’t meant as a detraction from the noble cause at hand this day pertains to.  That said, any day with toilet associations is as good as any to talk about poop monsters, homicidal lavatories and other horrors that’ll make you want to hold it in.

Horror films are made with the intent to either shock, disturb, disgust and get under our skin.  They come in all forms, provide a myriad of ways to achieve those affects, and – when done well – make us envision ourselves in the situation of the characters undergoing their unfortunate plight.  But is there anything scarier than the thought of something forcing its way in or out of our butts, or a creature preying on us from beneath while we’re sitting down at our most vulnerable? The toilet is supposed to be a sanctuary; a place where we can spend 20 minutes a day lost in comforting daydreams or even just a good book.

But let’s forget sitting on the toilet for a second and contemplate the waste that comes out of us.  Imagine all that smelly, disgusting poop you thought you could flush away and never think of again forming into a homicidal crap monster… These are the thought provoking instances you should ponder when watching the following movies.

I’ve come up with some of my best ideas on the pan.  I came up with the pitch for this article there and I can honestly say that it’s my proudest moment as a film blogger.  But these following nearly scared me off pooping for life.

Killer Toilet from Outer Space is a two-minute short film that will put you off ever pooping on a toilet you just happen to find in the woods for a lifetime.  The story follows a UFO which uses a man-eating toilet to lure humans to their death because it turns out that’s what fuels the vessel.  In this case, it’s a man with food poisoning strolling through the forest.

Killer Toilet from Outer Space is a thought provoking film that will make you question your purpose on this planet.  In the grand scheme of things, are we nothing more than dispensable toilet fuel?  Given all the energy we use up, it’s only fair that we give something back – even if it us our lives and bodies to human-devouring alien lavatories.

Wracked with guilt over the suicide of a loved one, a group of friends go on a retreat into the woods for some much-needed self-reflection.  That is until one of them – because she thinks it’ll make her skinny – eats a parasitical worm found in a dead fish, which creates a horde of poop-covered zombies from her diarrhoea.  Spoiler: they’re not very sociable zombies.

Zombie Ass, despite its faecal matter and splatter, has a positive message: Be proud of your body, and don’t take shortcuts to maintain the ‘perfect’ anorexic figure  We’ve all eaten worms in our time, unaware of the potentially nasty side effects in store afterwards.  It just isn’t worth antisocial poop zombies, folks.

Dreamcatcher isn’t regarded as one of the better Stephen King adaptations – and not many of his adaptations are regarded as good when you consider how many there have been.  But it’s an entertaining popcorn flick if you take it on its own crappy merits, and part of those ‘crappy merits’ involve a man giving birth to an alien from his butt.  It’s a truly nasty scene that’ll make anyone wince, so best not eat any spicy food when you’re watching this stinker.

Like the state of the bathroom the alien birthing took place in, Dreamcatcher is a mess – an entertaining mess you just can’t take your eyes off of.  But it won’t make you feel about your body, and you’ll quench a little where the sun doesn’t shine watching that scene.  Job done, I say.

When a serial killer escapes from jail, the only place for him to hide is in the sewers.  However, when he falls into a puddle of chemical waste, he doesn’t just turn into a monster, or a turd – he becomes a Monsturd.  Now the killing rampage can commence once again, and no one is safe – not even from the safety of sitting on the toilet in their own homes.

If there’s one thing to learn from Monsturd, it’s that you shouldn’t hang out in sewers – not even when you’re on the lam from the law.  It’s one thing to leave a trail of evidence in your wake, but a stench is easier to follow.  In a strange way, it also contains some interesting social commentary about the dangers of chemical waste, albeit not in a way that’s going to inspire any kind of environmental activism at all.  That said, if the title appeals to you, you’ll love this movie as it’s just as silly and fun as it suggests.  But if you think it sounds like… well, crap… then you should give it a miss.

Kevin Smith’s Dogma, all jokes aside, is a brilliant film.  Hilarious, satirical and controversial, it’s both a celebration of faith, and a criticism of the institutions which seemingly represent the best interests of Christianity.  Derided upon release by religious bodies who deemed it blasphemous, it’s fair to say that they missed the point entirely – and it has since gone on to become a cult classic and one of Smith’s finest outings as a director.

However, the most memorable moment is the Golgothan, a demonic poop monster made up of the excrement of those crucified back in the day.  As disgusting as it is, it’s still an impressive beast all the same.  If that came out of your system, there might even be a sense of overwhelming pride.

Only the genius of Charles Band could birth a franchise from a film like Ghoulies, and for that we should always be grateful to him.  But one of the main factors when attributing Ghoulies success – apart from it being a masterwork on par with the likes of Citizen Kane and The Seventh Seal – was its poster depicting little green monsters peeking out of a toilet with the tagline, “They’ll get you in the end.’’ And, oh boy, did they…

The most memorable scene in the entire series is in the second instalment, when a man, about to embark on his toilet journey, is met with his doom in a way that I don’t imagine would feel too good for anybody. When you’ve got to go, you’ve got to go – but in moments like this, maybe you should just go outside instead.

What are some of your favourite movies about homicidal toilets, the evil creatures that dwell within them and monstrous faeces?