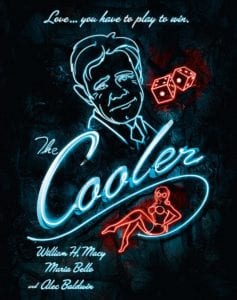 An unlucky casino ‘cooler’ working to pay off a debt to his brutal boss falls in love with a waitress but his boss won’t let him be happy.

The ‘cooler’ of this 2003 movie is not a drinking implement to stand at for a gossip in the office, nor is it another name for a nightclub bouncer but a term used for somebody considered unlucky who is employed by casinos to play at tables where somebody is winning big in order to jinx said player’s winning streak. Quite how one would quantify skills and experience needed for such a position is a mystery but in The Cooler Bernie Lootz (William H. Macy – Fargo) certainly seems suited to the position.

Lootz is one of life’s losers but has a job in Las Vegas casino The Shangri-La, a place where its old-school boss Shelly Kaplow (Alec Baldwin – Beetlejuice) is reluctant to move with the times and modernise. He employs Bernie as Bernie has a gambling debt and as an incentive to pay it back Shelly smashed Bernie’s knee with a baseball bat and made him work as the Shangri-La’s cooler, keeping the winnings low and everything running smoothly. However, Shelly is under pressure from younger businessman Larry Sokolov (Ron Livingston – The Conjuring) and mob heavy Nicky ‘Fingers’ Bonnatto (Arthur J. Nascarella – Cop Land) to change his more hands-on method of dealing with situations to a more corporate approach, and with Bernie falling for casino waitress Natalie (Maria Bello – A History of Violence) as his debt is nearly paid off, Shelly is forced into creating some luck of his own in order to keep things how he wants them. 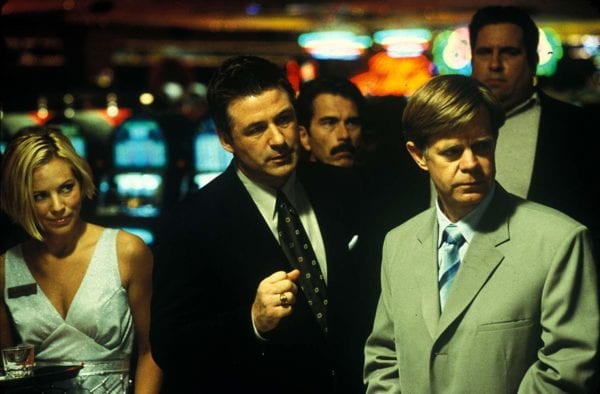 Coming in the wake of big Hollywood crime movies set in Vegas like Casino and Ocean’s Eleven, The Cooler is certainly a more interesting film than the basic plot suggests. More than a gangster movie – although it plays around in that genre for a bit – the film is really a character study with a romance narrative at its heart, and the romance angle is brilliantly played out by William H. Macy and Maria Bello who, right from the off, sell you their characters and draw you in to their excitement as you start to piece together the picture of how Bernie got to that place in his life. You’ll laugh with joy when both actors strip naked and pretend to have extremely loud sex just to annoy the neighbours, and as their relationship blossoms Macy – and director Wayne Kramer, employing some subtle filming techniques – brings out real warmth from Bernie that wasn’t there at the beginning of the film, something that makes what is coming to him – and Natalie – all the more affecting and heartbreaking.

But however good Macy is – and he is very good here – it is Alec Baldwin as Shelly who becomes the most engaging character, mainly because Shelly approaches his methods of punishment with humour and Baldwin, who admits in the documentary on the disc that he had just gone through a very messy public divorce and was not in the best frame of mind at the time, makes Shelly a much more convincing gangster than what we would have got if any of the usual Italian American names had played the part. Shelly is a brutal man with stiff old school values but the nuances that Baldwin brings to the role make him much more relatable when Bernie finally makes his move and Shelly drops the strong-arm tactics in a gesture of redemption that doesn’t make up for his treatment of Bernie and Natalie but goes to show that Shelly does have some feelings for Bernie and that he is a lot more of a layered character than just being a corrupt casino boss with a penchant for violent knee-jerk reactions. By the end of the movie Shelly has also made a journey of discovery about himself that makes his fate more certain than Bernie’s but despite Shelly’s obvious character flaws you cannot help but like him, thanks mostly to Alec Baldwin’s performance. 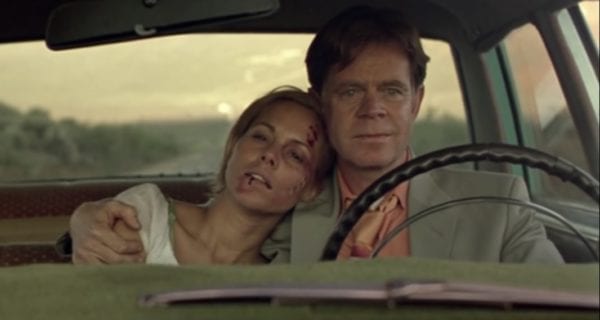 Feeling very much like a ‘90s movie thanks to its genre-straddling indie sensibilities, The Cooler won’t please everyone just because tonally it leaps about all over the place but had it been a straight romantic drama or a full-on crime thriller it just wouldn’t have worked as well. The film really hangs on its central performances and each actor is playing at the top of their game, giving the material a level of charm that holds your attention despite the constant tonal shifts, and although the ending isn’t really very satisfactory and feels like a bit of a copout considering how dark it could have gone, the inconsistencies in the writing and tone are balanced out by the magnificent performances. Despite being set in Las Vegas the print doesn’t seem very colourful and doesn’t really sparkle like you would expect, something that isn’t helped by the amount of beige suits that many of the male cast members wear, but despite that there is a wealth of supplementary material to get stuck into, namely two audio commentaries by director Wayne Kramer and composer Mark Isham, and Kramer and cinematographer Jim Whitaker, a superb feature-length documentary featuring contributions from most of the key players, deleted scenes, storyboard comparisons and a trailer plus a limited edition booklet, and as this is part of 101 Films’ Black Label collection this dual format set also comes in a fancy slipcase, making The Cooler another excellent addition to the collection of cult titles released under that banner.