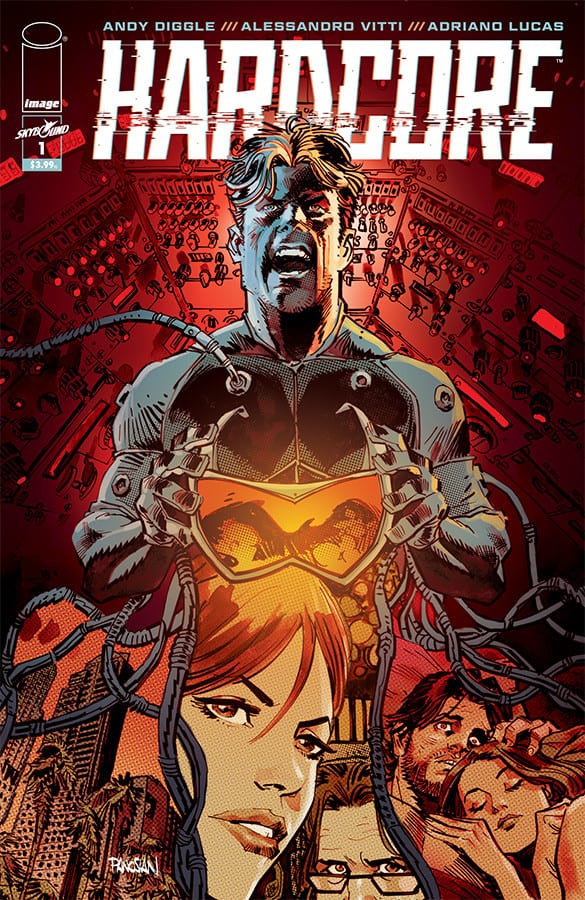 Hardcore could potentially be one of the most inventive comics to ever be emblazoned with such a boring name. Probably not the most rousing way to start off a review for a book that I intend to say several good things about, but I think it’s important to note that upfront. Comic books exist in a vast sea of monthly publications, so it becomes very easy to dismiss something as just another Image comics with a generic, vaguely edgy name, and I don’t want anyone to sleep on Hardcore because of this.

Don’t get me wrong, this is a sci-fi action comic. I’m not sure it has any intent of rising above that, or if it even should. The premise is inventive, if not wholly original. A government black ops agency that uses stealthily administered implants to remotely and virtually take control of certain human beings in order to get close enough to specific targets to assassinate them. This is a Philip K. Dick premise as done by J.J. Abrams, put through a James Bond filter.

Based on a concept by Robert Kirkman and Marc Silverstein, Hardcore is another book developed under Kirkman’s Skybound Entertainment, a varied multimedia concern, and published by Image Comics. Andy Diggle pulls writing duties with Alessandro Vitti on art, both turning out competent work and creating an engaging first issue that concerns itself with getting the reader into the story. The book doesn’t fall into the trap of meandering character building that similar projects often find themselves in too early on. It sets a tone, introduces you to the main concepts and characters, and leaves you wondering what happens next. That might sound like serialized storytelling 101, but it’s not nearly as common as it should be, and I appreciate the workman-like execution presented here.

If you’re looking for thought-provoking science fiction, you can probably imagine that a book called “Hardcore” isn’t aiming for that. Honestly, I’m surprised that we made it through the 80s and 90s without that title emblazoned on a holographic comic book cover. Kind of seems unfair that we’d so effectively dodged that bullet, only to have Kirkman & Co. ambush us with it at the tail end of 2018. But that’s neither here nor there. Sci-fi action. That’s the promise of the title and the premise, and it looks like it’s going to deliver.

It’s always difficult to recommend a book like this based on its first issue. I’ve read great first issues from books I’ve gone on to dislike, and I’ve disliked #1s of books that I’ve gone on to enjoy very much. It’s difficult to projects its future, but Hardcore is in capable hands and it’s off to a good start. It hits the spinner racks December 19th.