Gersha Phillips is an American costume designer who has been working in the television and film industries since the mid-1990s. She is best known for her work on projects like Falling Skies, My Big Fat Greek Wedding 2, and Star Trek: Discovery. 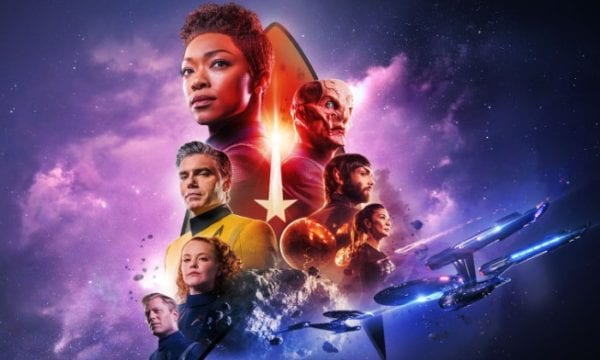 I love reading over IMDB pages because I learn about new positions, and one thing I found interesting about yours is that you’ve been credited as both the costume designer and the wardrobe designer. What is the difference between the two, because I assumed it was one department?

No, that makes a lot of sense. That point about the legacy of theater production seems like the most logical reason for the connection. Sort of going off that, I remember seeing an interview with Michael Wilkinson for Batman v Superman where he talked about how, during certain scenes, the department had to create different fabrics to either hide Henry Cavill’s muscular figure, or pronounce it. I’m wondering, have you ever had to deal with a similar scenario of shaping an actor’s physique, and, if so, how much of it comes down to color versus texture?

It’s really dependent on the costume and the character that the actor’s playing. So yes, I have done that. In Star Trek we do it with Saru for instance. We don’t work as much of his body per say; there were supposed to be some prosthetic pieces that were going to be added that we would’ve had to build around, but they ended up going with a simpler physique. So he wears these suit boots that sort of help him with his posture and give him that flight-animal feel. It comes across quite well.

But it’s dependent on the character that you’re needing the body to be augmented for. You know, I’ve done fat-suits and things like that. And when I did [The Secret Life of Marilyn Monroe] we had to do some different augmentations for the body to make our actress, Kelli Garner, look more like Marilyn Monroe, and therefore more voluptuous and more curvy. And we just used different sorts of body padding and augmentations to help us with that.

You use a lot of spandex depending on what you’re trying to shape. If you’re trying to make something look smaller, you bring it in with some heavy duty spandex. And if you’re making something bigger, you use padding to help you bulk up the body, though memory foam is a really good thing too, especially if you’re doing muscle suits and things like that.

And I think time and again, it’s really the colors. Some hues hide things better obviously: darker colors hide things more than lighter colors on camera. But it depends on the character that you’re doing and what colors you’re going to apply to the costume. From my experience so far anyway. 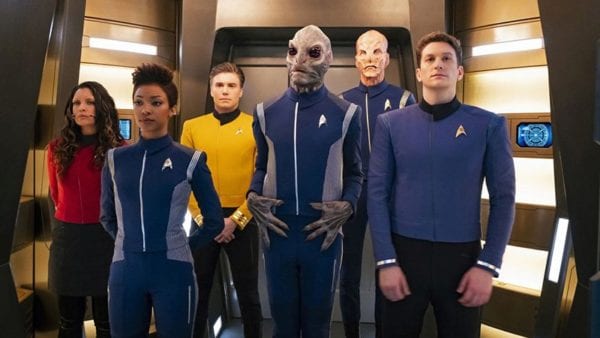 That’s fascinating to hear. I’m glad that your experiences have provided you with these opportunities to experiment with augmentation. Now, you’ve done television shows before like Falling Skies and House of Cards, but Star Trek Discovery I believe is the first time you’ve been brought on to do both the pilot and the rest of the series. Does having the ability to do the pilot affect your work for a show?

Yes, definitely. Because you’re setting it up yourself and you know that you’re continuing it through. But to be honest, I actually wasn’t the first designer hired. Some of the starting points are a little bit similar to doing the same thing when you inherit somebody else’s vision, and that’s usually how it works with a pilot, especially with Falling Skies for instance where Sharon Davis did the pilot and then I came in and carried that first season.

It was really cool being on Discovery from the beginning. When I go back and look at the journey at how we started, like the colors we started with cause, you know, when we initially started, we were going to do TOS colors: we tried to do a version of that. And then we did another version that was a little lighter, a little paler, based on sort of metallic, but when we camera-tested those we didn’t like them [laughs]. So that’s when we went back to the TOS. And then we decided to come up with something more unique and more compact. And that’s how we ended up with the navy costumes.

And I feel like it’s amazing to see how that process works, how we grew through it and the things that were added during different camera tests. You know, we added the deltas onto the uniform at one point; the soles of the boots came on after camera tests. Different things like that because they wanted it to have more of a statement and just show more on camera because they knew the lighting was darker and moodier, and so they wanted the costumes to pop in a certain way, and I think it works great. The costumes look amazing when you see them on Discovery, and it’s a great combination.

No, I agree entirely. And I know you get this a lot, but your work on the series is impeccable and more than lives up to the standard of the franchise.

You talked about camera tests, but I remember reading in an interview you did where you said that your designs are influenced the most by the story. Does this mean you have to wait till you get the scripts yourself, or are you relying on descriptions given by the writers and producers?

Well the process on series, and I think it’s like this on most series now because I actually haven’t done a lot of television, but the process is usually you’ll get a short outline, then a more in-depth outline, and then you get the script. So it comes in a three-step phase.

And even before that, if there’s something that the writers and producers know is going to be big, they usually give us a little heads-up on that. For instance, when we were going to do Mary last year, they gave us a good lead-up on that- we got like a three month lead that we knew we were going to be moving into that. And so we started thinking about the costumes early on, and what that was going to be, and what was needed. We ended up building over 100 costumes for those episodes, so we needed that time [laughs].

You know, sometimes the process is a lot. There’s not enough time to do quite that much work. I think the producers on this show are well aware that the more time they put in, the better their product is going to come out, and also with less gripes somehow. Because I think it helps being able to prepare ahead of time since it is story-driven. And, even though there are some things that come from TOS or the canon of Star Trek where we sort of change things, you still need a little bit of that time to put that all together and create what the new look will be.