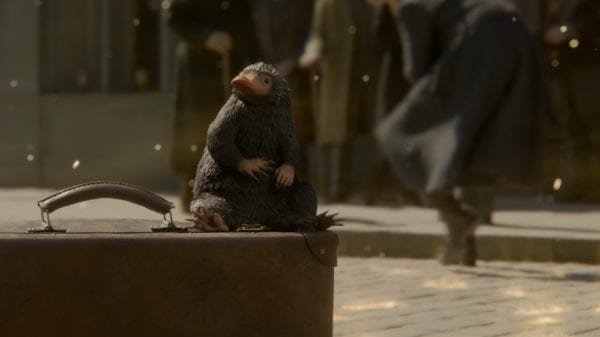 And just when I was thinking the Niffler couldn’t get any more adorable, you gave us baby Nifflers!

Exactly! Tim Burke, who was supervising that work with Method, really drove into what they could be. We had a slightly different design for them originally and then we thought about making them the fluffy chick versions of the adults. That went into the different coloured ones. They’ve immediately got character. They don’t have tonnes of screen time but their impact is massive.

One of my favourite set pieces is in the records room at the French Ministry with the demonic cats (Matagot) and the Zouwu. That sequence is spectacular!

That was there from the early script – the Zouwu particularly. Tim and I worked initially together on designing the creature, which was definitely a Chinese tiger-like thing. We had lots of different designs, but it eventually boiled down to a crazy bit of concept artwork that David wasn’t sure about. One of our animators built and animated it and, as soon as David saw that animation, he just loved it and we knew we’d got the Zouwu. From there, Andy Kind at Framestore worked with Tim to further the design and come up with the creature.

The Matagot as well had loads of different concepts, but they were ultimately based on a design we had fairly early on. That was again Framestore art department and visual effects who built them. 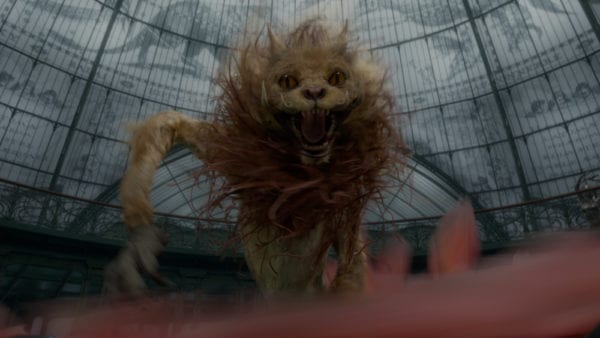 For the environment, Stuart had designed this beautiful French Ministry as huge domes that would move sideways. About a third of the set was built for real and then it was designed so it could be redressed to play different areas. Tim worked closely with the DP Philippe Rousselot and with the art department and the special effects team to work out how we could get actors onto something that was physical for the moving shelves. Special effects supervisor Dave Watkins had built soft versions of the shelves that could be rolled around and we had extensively pre-vizzed the sequence, from the moment the cats come out to when the Zouwu lands in the cemetery.

It had been pre-vizzed within an inch of its life so, when it came to filming, we knew what elements would be needed from the actors. There’s large chunks of it that are full CG, with a CG Newt on a Zouwu being chased around a CG environment. Obviously the idea is that you don’t see the blend between all of those things, but there was a hell of a lot of work in there.

The Zouwu leaping from place to place was something that was always there. The story was created that when he was in the circus, he had been bound up and his mane was tied up so he couldn’t use any of his powers. When Newt takes the locks off, he begins to regain his powers. In the script, it said a Zouwu can travel, I think, 1000 miles in a day. Originally, Tim and I were thinking “wow, that’s really fast”, but then Tim realised that’s only about 35mph, which isn’t that fast. Tim worked again with Andy at Framestore and they came up with him being able to warp space and time. His mane has the energy which then helps him do something like Apparate. It meant building a full CG version of the cemetery and the French Ministry, which could be bent into each other. A lot of creative thought and time is spent on that one moment.

You’ve been to the Oscars once before with a Potter film and you have a BAFTA nomination for this film already. Are you excited to be part of another awards season?

When we got the BAFTA nomination, to say I was over the moon was an understatement. Sadly, we already knew we weren’t getting on the Oscars list. The BAFTA nomination really validated everybody’s hard work. It was really cool this time to see the reviews saying how good the visual effects were. It’s a great honour to have that validated by BAFTA and we’re keeping our fingers and toes crossed for the night.

I don’t want to get you in trouble, but can you tease anything for the next Fantastic Beasts films?

Some new beasts! [laughs] I’m currently pinning designs to the wall of new creatures. The creative journey has started again and it’s a pleasure to be invited back to continue that journey. Like I said earlier, the bar has been raised and we have to keep pushing ourselves.

Great! Thank you for your time and I look forward to seeing what you’ve got planned for the next one. 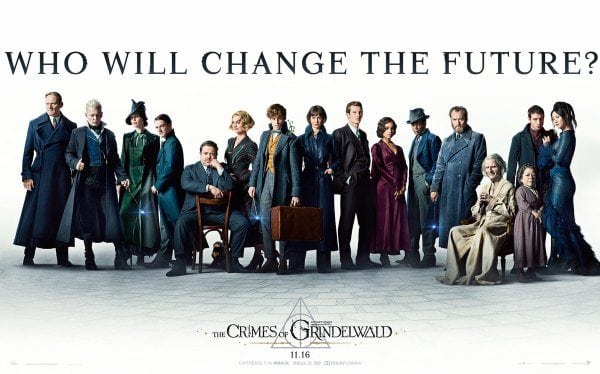 Fantastic Beasts: The Crimes of Grindelwald is out on digital March 9 and 4K, Blu-ray and DVD March 18th.

Many thanks to Christian Manz for taking the time to speak with us.