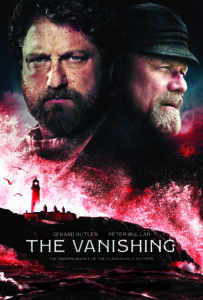 Three lighthouse keepers on the remote Flanna Isles find a hidden trunk of gold, leading to their mysterious disappearance. The film, (very) loosely inspired the real disappearance of the three lighthouse keepers in 1900, attempts to explain what happened during that cold December weekend. And what we are given is a middle-of-the-road thriller.

James (Gerard Butler), Thomas (Peter Mullan), and Donald (Connor Swindells) all bring various experiences of how to manage a lighthouse – Thomas the most experienced to Donald with the least. James and Donald showcase their closeness through Donald’s affection and playfulness. Thomas is the clear-minded one who sees the job first and his fellow keepers second.

When the trio arrives on the island, we are treated to the mundanity of lighthouse maintenance of lighthouse keeping as each character can present their professionalism and their experience. Where the film fails at basic storytelling is understanding more about their motivation, and the slow buildup of tension. The film tells us very little about their backstory or indeed the group dynamic outside of the lighthouse keeping experience. It would appear the filmmakers misconstrue understated storytelling with absolutely nothing. Tell us why we should care about your characters?

The film does present moments of tension and unease early in the story, but it’s either through obvious foreshadowing (an oddly scripted crab-cracking dinner scene sees Thomas tangentially connect this act with interrogation and the popping of a prisoner’s eyes) or through abrupt and unearned confrontations. Notably, when they first discover the trunk laying next to a supposed dead body, Thomas tells Donald to climb down to retrieve the trunk because he’s expendable. This moment has the potential for tension but squandered by underdeveloped characters and no build-up.

The body lying next to the trunk turns out to be alive, and in a frenzy akin to Golem from Lord of the Rings the body leaps from a state of stasis and attempts to drown Donald, all the while Thomas and James watch on, feebly attempting a rescue mission. It’s important to note that at this moment they don’t know what’s in the trunk; only the audience does. Besides the strange dinner scene, there has been no indication that James and Thomas are so easily willing to let Donald die.

This scene would make sense had the film continued the narrative trajectory of the two elder men treating Donald as expendable, but it only happens in this scene.

When they discover what’s inside the trunk, paranoia ensues as greed and fear of being caught corrupts the group. The performances from the three lead actors are very good as none of them put a footing wrong. Where it falls apart is the understated direction and a confused script; the motivations from the trio are unclear. The descent to madness is paradoxically slow and sudden; conversations will be had about what to do with potential intruders, but then psychotic action unfolds.

The Vanishing is that strange film that is neither terrible nor astounding. Seldom will one feel engrossed, nor will one feel the paranoia. The film feels cold and distant, forcing the audience to observe, as opposed to feeling, the paranoia and greed engulfing our three leads.