Bandai Namco Entertainment has released the launch trailer for Jump Force which arrives on Xbox One, PS4 and PC on 15th February but is available tomorrow for all Ultimate Edition owners.  Jump Force celebrates the 50th Anniversary of the Weekly Jump magazine by bringing together 40 of the manga world’s most famous faces from beloved series such as One Piece, Bleach, Dragon Ball and Naruto.  You can watch the new launch trailer below… 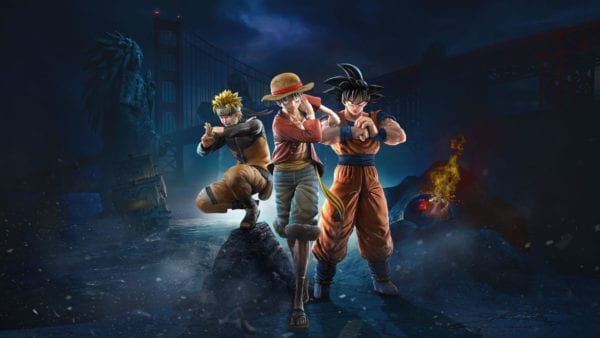 In Jump Force, the heroes from the famous Weekly Jump Magazine will unite to decide the fate of a world where Earth and the Jump world have merged.  Players will fight in real world settings using iconic characters including Naruto, Goku, Jotaro and Dio from JoJo’s Bizarre Adventure, Renji Abarai from Bleach and One Piece’s Monkey D. Luffy, Sanji and Blackbeard.

This action packed, area based brawler will make the most of latest technologies in order to bring these beloved characters to life in a way never seen before.

We’re pleased to unveil the launch trailer of JUMP FORCE, available to play tomorrow for all Ultimate Edition owners.

Created to celebrate the 50th Anniversary of the WEEKLY JUMP magazine, JUMP FORCE sees 40 of the manga world’s most famous faces collide – including characters from iconic franchises such as DRAGON BALL, NARUTO and ONE PIECE.

Players will also be able to create their own avatar using customisation items from across each manga brand and fight alongside their favourite heroes online.

Chat about Jump Force, One Piece or any other game on our Twitter @FMyth_Gaming.