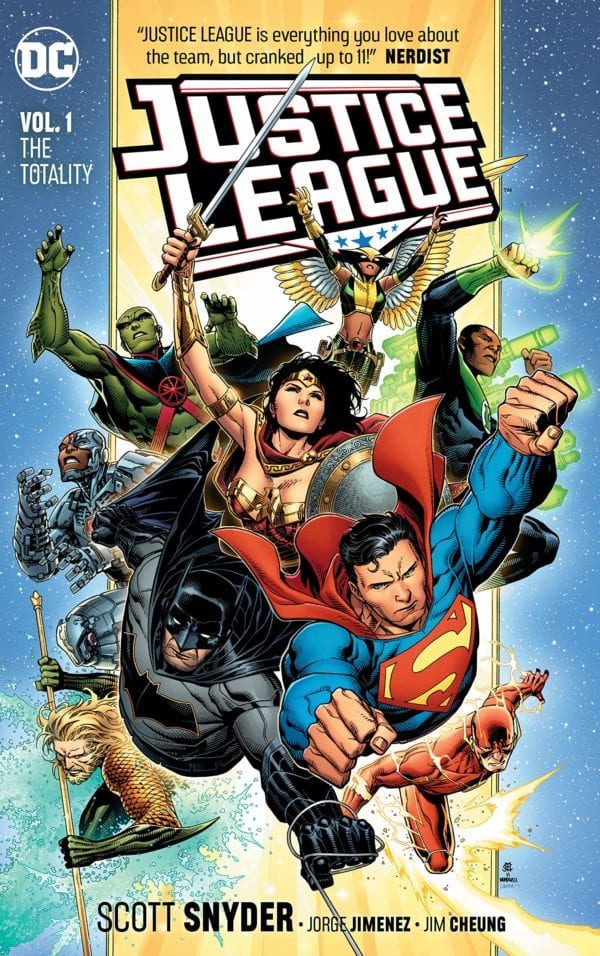 The Justice League has been off on some fairly crazy adventures the last couple of years thanks to Scott Snyder and they’re off on even more wild and cosmic quests in the first volume of Snyder’s tale, Justice League Vol. 1: The Totality. Spinning out from the events of Snyder’s Dark Nights: Metal and Justice League: No Justice, the Justice League discover more cosmic threats as Lex Luthor recruits a group of villains for the Legion of Doom to claim the mysterious power for himself. Much like the stories preceding it, The Totality is a pretty wild story the leans into the craziness of the story while focusing on some of the ‘lesser’ members of League.

Scott Snyder has spent several years in the Dark Knight’s wheelhouse, first when Dick Grayson was under the cowl and then when Bruce Wayne returned to Gotham City throughout the New 52’s Batman. While Dark Nights: Metal featured several League members, it was still predominantly a Batman story that closed off a few loose ends from his Batman run. With the whole League open to him, Snyder really digs his heels in with the other characters, particularly Green Lantern John Stewart and Martian Manhunter. Both characters have been absent from the Justice League title for so long, but Snyder wastes little time in reminding readers why they are such instrumental and fan-favourite figures in the group. His handle on J’onn is quite good as he displays the martian’s empathy and connection to his teammates, yet also examines his acute loneliness as a result of how different he is from the others.

Longtime fans should enjoy how the team is essentially the line up of the Justice League animated series. Though DC’s big three get their moments to shine, Batman, Superman and Wonder Woman are put more on the sidelines, but this proves beneficial for Snyder and helps place more focus on Stewart, J’onn, Hawkgirl and even Flash. It even goes beyond the Justice League as Snyder examines Lex Luthor and his return back to villainy. The New 52 and DC Rebirth did a good job showcasing Lex as a hero, if a very arrogant and sometimes reluctant one, but his turn back to villainy doesn’t seem wildly out of place or character thanks to Snyder’s handling. His motivations are fleshed out as is his disillusionment with the universe and his purpose, a note that picks up from where he was left in No Justice. Lex is one of the best aspects of the book due to his anti-hero (at least in his mind) depiction.

The only other Legion of Doom member to get a fair bit of focus is Sinestro and a complicated relationship with Stewart. Most of the time it’s always Sinestro and Hal Jordan that writers examine so pairing him instead with Stewart opens up some untapped potential, especially with Stewart’s guilt and self-loathing over the destruction of Xanshi. The other Legion members – Gorilla Grodd, Black Manta, Cheetah and The Joker – don’t quite have as much to do beyond threatening the League and nearly killing them in their individual attacks. They could have been utilized or examined a little more, but when Lex gets such a strong and well done examination its hard to blame Snyder for pushing some of the other villains to the side.

The story moves at a good pace and keeps building to several exciting developments. The League really is put to the test as they’re confronted with a problem they know nothing about, much less one of their own making due to Dark Nights: Metal and No Justice. There is a good balance between the story and the characters and how the Totality’s mysterious nature affects each of them. The only problem with the story is that its not a great jumping on point for new readers since it does build directly out of those previously mentioned stories from Snyder, but its a minuscule issue since Snyder gets any readers up to date on the gist of the problem and the why of it. Some readers may face a bit of confusion, though, over the cosmic nature of the story as Snyder really embraces a Grant Morrison-like zaniness into what the League is up against and the story’s narrative. There is a lot of third-person narration that harkens back to the Silver Age of comics, a fact which could have come off really cheesy or out of place, but Snyder makes it work.

With Jorge Jimenez and Jim Cheung on art duties, the artwork looks great throughout the book. Despite the difference in their styles, there is consistency between them. Jimenez and Cheung’s character figures are well proportioned, animated and emotive. There’s some very creative imagery the pair employ, especially once the characters are inside the Totality or Batman and fights Luthor within Superman’s bloodstream (yes, you read that right). There’s also a chapter with artist Doug Mahnke where he, along with the issue’s co-writer and Snyder’s frequent collaborator James Tynion IV, details Luthor’s motivations and the beginnings of the Legion of Doom. Combined with the colours of Alejandro Sanchez, Tomeu Morey and Wil Quintana, The Totality‘s art is very vibrant and detailed.

Snyder delivers a Justice League tale that is a little outside the norm for these heroes. It’s very much influenced by Grant Morrison’s style, but the cosmic threat gives the book a fresh appeal. Snyder’s handling of the characters, heroes and villains, are well done with a nice understanding of who they are at their core which happens to also be one of the main themes of the story. The combined artwork from Jimenez, Cheung and Mahnke is consistent and rich in its detail, making the book a pleasure just to sift through for the imagery. As Snyder has planted the seeds for an intriguing run on Justice League, fans should be well satisfied with the book’s first volume.