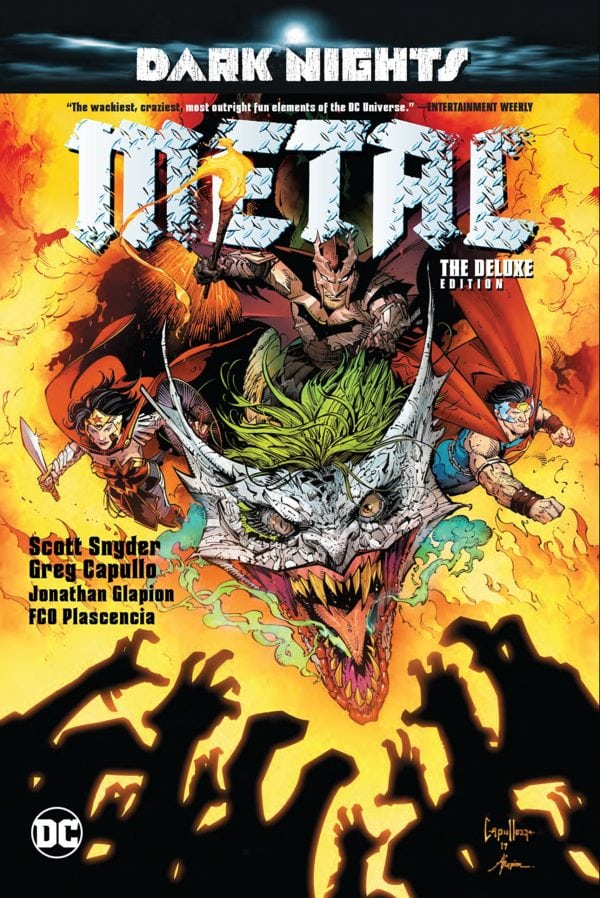 One of the biggest events DC Comics has made in recent years is Dark Nights: Metal, a continuation of sorts to Scott Snyder and Greg Capullo’s fan-favourite Batman run from The New 52. The pair take on the multiverse in this wild and crazy story that deals with fantastical concepts and explores some of the darker aspects to the DC Universe. It’s a pretty out there story, but Snyder and Capullo do well with both the story and artwork to make an enjoyable and memorable event with Dark Nights: Metal – The Deluxe Edition.

After investigating a mystery around an unknown and powerful metal, Batman plunges ahead to discover the full scope of this potential threat to not only Earth, but the whole multiverse. Things go from bad to worse when a collection of evil Batmen from the Dark Multiverse break through, vowing to plunge Earth and the whole multiverse into darkness. It’s a pretty dire story that Snyder writes as Batman, Superman, Wonder Woman and the rest of the Justice League battle for their lives in an attempt to save the multiverse.

Metal is quite an out there story that’s unlike any story Snyder has done before. By the end of the first chapter, readers will be captivated by the story and the few twists already presented. Snyder leaves the heightened realism of his Batman run and goes full cosmic sci-fi here. Its exciting to see him to do and do it well with such a huge cast that includes the core Justice League members along with second and third-tier members of the superhero group. His takes on Superman, Wonder Woman and Green Lantern are great and all in character, particularly Wonder Woman in the latter half of the book. There are also some very interesting and fun groupings made as the heroes split up on separate missions to stop the Dark Knights; I never thought I’d want to see a Aquaman/Deathstroke buddy-cop series, but here we are.

Dark Nights: Metal won’t necessarily be for everyone, however. Snyder plays around with a lot of crazy and fantastic concepts much like Grant Morrison does in his stories. This isn’t by accident, though, as Metal picks up on several of Morrison’s epic stories, namely Final Crisis and The Return of Bruce Wayne (as featured in the Dark Days: The Road to Metal book). This isn’t a bad thing, though, as Metal offers readers something more than just the typical stop-the-bad-guys-save-the-world adventure, but touches on the power of stories, mysteries and family and how they can drive us forward. Snyder utilizes the meta-nature well to deconstruct stories and the power they hold. If you are looking for action, however, there is plenty of it here that is fun, intense and unique to Snyder’s past stories.

The only thing that hinders this book is how it doesn’t really collect the full story. All the issues of the miniseries are collected of course, but the book doesn’t feature some fairly significant chapters, such as Batman Lost, Hawkman Found or Dark Knights Rising: The Wild Hunt, the latter of which Morrison co-wrote with Snyder. It loses a bit of gravitas on just how dire and widespread this threat is as well as answering some questions about where other heroes, such as Flash and Cyborg, went to between chapters. The book is still accessible, but you lose out on the full scope and just how dangerous and interesting some of the Dark Knights are, such as The Drowned or The Batman Who Laughs especially.

The benefit of getting this book, however, is the chance to look over Greg Capullo’s images in the deluxe format. Capullo really gets to unleash himself with the imagery as he gets to play with almost the entire DC pantheon. Anyone who has followed his past Batman work will know he doesn’t usually shy away from creepy and graphic images if they’re called for, but he really dials it up to 11 here with the kinetic action, fairly graphic deaths or violence, bodies stuck on towers or three crazed Robins chained to The Batman Who Laughs, who is quite terrifying in his own right. Regular Snyder/Capullo collaborators Jonathan Glapion and FCO Plascencia compliment Capullo’s art very well. Plascencia in particular crates some vivid imagery with his colours, especially towards the finale.

Included in the deluxe edition is a collection of variant covers from some of DC’s biggest artists as well as sketches from Capullo on the Dark Knights and interior sketches for Dark Nights: Metal #1. It’s not much, though, and considering the scope of this event and how it built off several of Snyder and Cappulo’s past stories, not to mention Grant Morrison’s, you’d think there would be a little more here. I would have liked to have seen some script pages from various issues to see how Capullo brought them to life or thoughts from Snyder on how he came up with this wild story. What we get is still good, though, just could have been a bit more varied.

Dark Nights: Metal is one of the most enjoyable and interesting events DC has put out in quite a while. Snyder takes advantage of using way more DC heroes than just Batman to dive into why they’re so special while Capullo creates some of his best work yet. The book has some good themes while still delivering an action-packed story and fans of Batman, the Justice League, Snyder and Capullo should leave the book pretty happy with what they’ve read.