A group of ex-soldiers team-up to take down a Latin drug lord and plan to take his money but numerous complications soon arise. Director J.C. Chandor and actor Oscar Isaac have previously teamed-up for A Most Violent Year, and while the plot is different there is something familiar in Isaac’s Santiago, an ethically ambiguous soldier, offering his comrades a seemingly simple deal. With the help of a foreign army, Santiago’s team will find and capture a Latin drug lord, a Mr. Lorea (Reynaldo Gallegos), and take his money – if they survive.

Both the premise and script are fairly generic. There is the gung-ho soldier and then there is laid-back, Stoic soldier and then there is the true warrior of the bunch. By themselves, films built around constructing a team is no disadvantage. Pared to their bare essentials, not much separates The Dirty Dozen from The Avengers or either one of those entries from Inglourious Basterds in being cinematic attempts to stretch out over several hours an unlikely bunch coalescing into an effective unit. But those films – whether you like them or not – do offer (however problematically) major themes and stakes (nothing less than the fate of entire planets in some cases) for the heroes and a compelling villain. Triple Frontier lacks both elements but does well enough on the performances of the main cast. 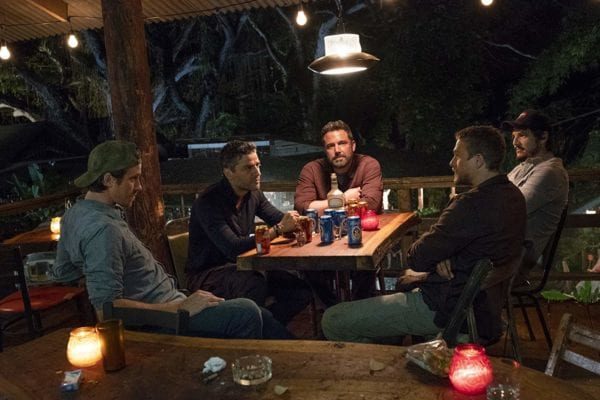 The beginning offers little tension as Santiago easily persuades his former friends to join his quest even after the set-up is revealed to have been slightly deceptive. If the main attraction were just the performances, Chandor might have trouble maintaining interest but he does an able job of adding just enough detail and nuance to make the characters have some genuine pathos. The problem is an unwillingness to go beyond fairly well-trodden paths. Anyone who has seen Denis Villeneuve’s Sicario which was released just a few years ago will be stunned at how little Chandor risks in trying to move beyond what Villeneuve attempted (sometimes radically unsuccessful in my humble opinion).

The one place Triple Frontier is refreshing is the music selected by Chandor offers some interesting twists. But with an all-too-conventional script constraining the actors, the film is satisfied to move (if smoothly and expertly) on automatic pilot of a heist that continually goes wrong. When the (inevitable) “twist” sets in a lot of the audience is going to be tempted to simply burst out laughing rather than be genuinely satisfied by the sudden flip of the film into Home Alone territory with a bit of the Money Pit thrown in to make the attempt at genre-bending explicit. It would be spoiling to say more but the attempts at making the plot more innovative than it really is do not enhance the film by much.

Chandor does raise some interesting questions as he did with A Most Violent Year but the ambience of that film matched its grittiness. The locales and stunning cinematography sets the mood well enough but one feels something is missing from making the elements truly gel in Triple Frontier. Everything feels right from the languages spoken to the physical gestures to the cliché-ridden but effective foul humor. But there remains a rather nagging suspicion that the script either went through too many changes or not enough.

When the story is genuinely focused on Ben Affleck, Oscar Isaac, Charles Hunnam, Pedro Pascal, and Garrett Hedlund the film has a lively energy to sustain even the slow moments. Problems arise in trying to find anything deeper than the surface of a group of battle-tested soldiers put into murky ethical and physical dilemmas. It could be Chandor is playing it straight in terms of the themes of loyalty and whether the ends can ever justify certain means. 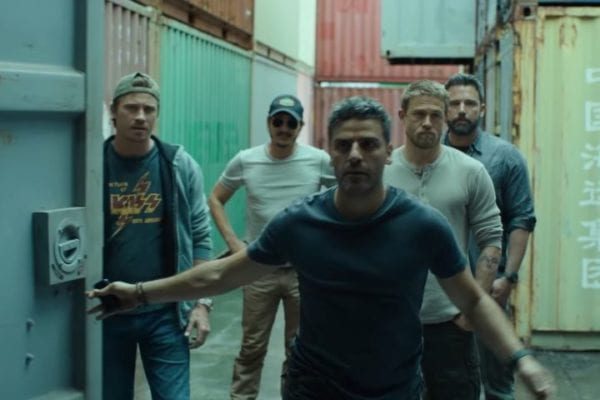 If so, though, not much has been added to the canon of team-ups. If, on the other hand, the story is meant to be allegorical a lot of puzzling questions will remain even after a second viewing. I would hate to pin all the troubles on Gallegos but without a truly challenging narrative, the only major option left is the villain and though Lorea is a well-made mythic character his decisions and motives are too opaque to truly register much of a reaction in his, admittedly, few scenes onscreen.

Chandor has crafted a well-made and firmly paced action film. But given the promise of all-around fairly well-seasoned actors one wishes something more venturesome was attempted. Still, Triple Frontier may go down as a solid, minor classic in this genre. One can only imagine what would have happened had the director had larger ambitions in mind.