Following the recent announcement of the new Alliance War expansion for The Elder Scrolls: Legends, developer Sparkypants has revealed a roadmap of upcoming content that fans can expect to see coming to the game this year. 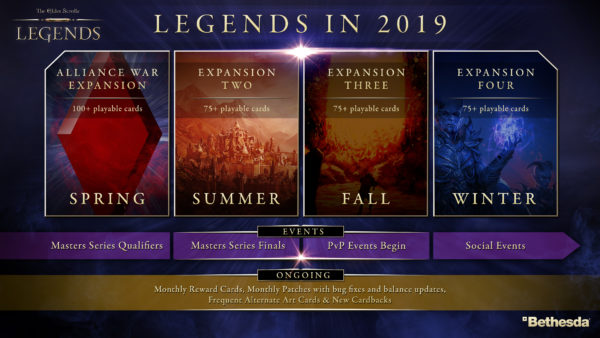 The Alliance War expansion has now introduced over 100 new cards and five new three colour house card combinations, including the Daggerfall Covenant, the Aldmeri Dominion, the Ebonheart Pact, the Empire of Cyrodiil and the Guildsworn, but there is much more to come.  This summer will see another expansion released, providing players with at least 75 new cards.

Sparkypants will release another three expansions this year for The Elder Scrolls: Legends with each bringing at least 75 new cards for players to enforce their deck, there will also be a range of events such as PvP and social events coming this autumn and winter.

As well as all this to look forward to, there will still be monthly reward cards, alternate card art and regular patches with bug fixes and rebalances.

The battle for the Ruby Throne begins in the latest card expansion for TES Legends! Fight alongside five different factions vying for power across the Empire.

Look out for more news on The Elder Scrolls: Legends in the future.