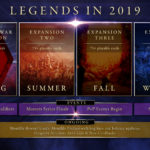 Following the recent announcement of the new Alliance War expansion for The Elder Scrolls: Legends, developer Sparkypants has revealed a roadmap of upcoming content that fans can expect to see coming to the game this year. The Alliance War expansion has now introduced over 100 new cards and five new three colour house card combinations, including the […]