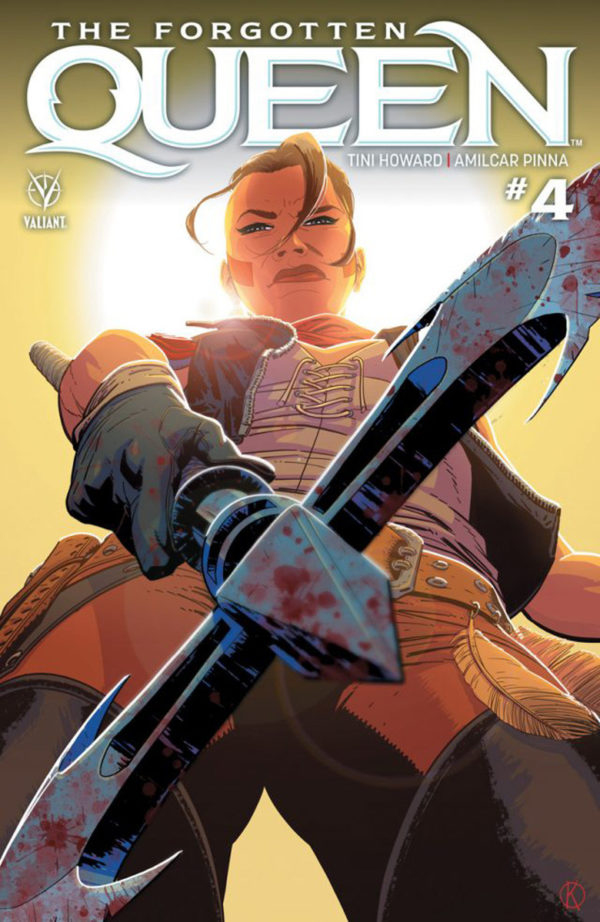 Readers versed in the Valiant Universe probably already know that Gilad Anni-Panna (or the Eternal Warrior) has two immortal brothers. When you don’t know, though, and Dr. Oyuunchimeg switches to “brothers,” all casual-like, it couldn’t come as more of a surprise.

One of the great things about reading The Forgotten Queen has been how welcoming the series has been to new readers. More than previous issues, there’s an awareness reading issue #4, that we’re touching on some key events, not just within this series, but within the Valiant Universe. The Boon, for instance, sounds like something that’s would’ve come up before (maybe in the Eternal Warrior’s solo series, since it explicitly involves him). Writer, Tini Howard, explains just enough so you can understand what’s going on, without straying far from Vexana’s involvement.

Howard’s control of this story has been remarkable, from the start. The classic, serial format suits this series to a tee. Save the beginning to tie up loose ends (in this case, Vexana’s alliance with Dracula), then set-up the next issue with an open ending. That’s as much true this issue. Despite technically being the last one, Howard doesn’t write it as a good-bye and the seeds are very much in place for a Vexana follow-up.

The meat of the issue is a look back at Vexana’s childhood, which is something I didn’t see coming, but would be another cool idea for a miniseries – Young Vexana. Vexana may be immortal but that doesn’t mean she remembers her childhood any better than mortals do (if anything, she has more reason to forget), so instead of Vexana confronting her brothers this issue, we have Oyuunchimeg sharing what she learned from her research into Vexana’s life.

Right away Ulises Arreola’s colors set Vexana apart from the rest of her family (one brother has black hair but that’s about it). Dressed in whites and creams, they blend in with their surroundings while Vexana stands out. She was born in Ur, too, yet the city doesn’t recognize her in the same way that it does her brothers.

That “Vexana against the world” mentality continues with Jeff Powell’s letters, where Vexana’s narration boxes are filled with a caustic red and the animosity between her and Gilad requires extra bold emphasis (and that’s before Vexana finds out he’s her brother). It’s not a vicious anger at first, but a squabble for supremacy, where bold type asserts correctness. Gilad assumes he has the moral high ground but Vexana doesn’t take that for granted. When he pulls at her cape it’s a little kid demanding attention and Vexana isn’t someone to be pushed around.

For all of the fighting, The Forgotten Queen is a personal story and that’s thanks to Amilcar Pinna’s focus on Vexana’s face. Every emotion is laid bare, and it’s why accepting this series could be over is such a bummer. Vexana can never be done but will we hear the rest of her story?