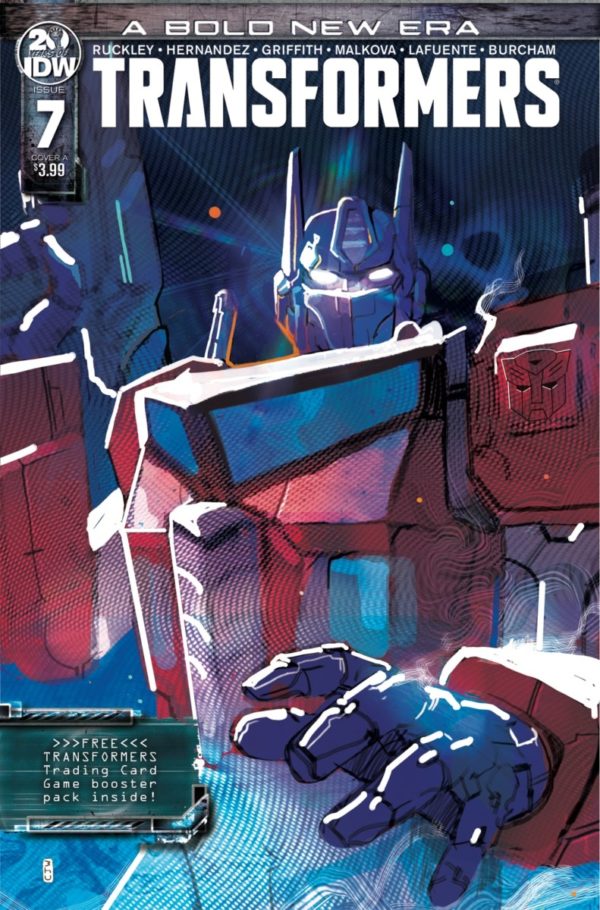 After taking a bit of a break from the main plot in the previous issue, Brian Ruckley emphasizes how much more drastic the situation on Cybertron has become in the aftermath of Rubble’s murder. Transformers #7 is pretty effective in its emphasis of what this means for many of the characters going forward, whether it’s through Bumblebee’s grief or the political ramifications Orion has to deal with. Ruckley moves pieces into some interesting places that makes the series more intriguing.

It’s somewhat surprising to learn Rubble actually died at the end of Transformers #5. As the audience’s mouthpiece and eyes for the reboot, as well as being a pretty central character, the fact Ruckley has taken him off the board is a game changer for the series.  On the one hand, it’s shocking Rubble has died before getting to really know Cybertron or seeing the many ways it will change in the not too distant future and, allowing readers to see him join up with either of the factions the Cybertronian war will create. On the other hand, though, Rubble’s death still feels a bit hollow. The only connection readers had with Rubble was his status as a proxy for the audience with his questions. Rubble never really had any defining characteristics of his own aside from being a young and idealistic transformer to make his death truly emotional. In this way, his death is a mere plot device to advance the story rather than something more meaningful.

Nevertheless, Rubble’s demise has a profound effect on several of the characters, particularly Bumblebee. He takes the loss of his apprentice so hard to the point he rebuffs Orion Pax’s attempt to speak with him and tries to fully join Megatron’s growing Ascenticon movement. It’s a pretty interesting path Ruckley has put him on and a fresh take on the character given Bumblebee has always been one of the most loyal and dedicated Autobots before and during the war no matter which iteration of Transformers. The decision too join up with Megatron’s movement is built up well enough so it doesn’t seem jarring, especially as Bumblebee is blaming both himself and the system for Rubble’s death, though Ruckley is still playing coy with how and why Bumblebee is no longer part of the Autobot force. Whatever the reason, it has made this version of Bumblebee a captivating character.

Even through characters like Prowl and Orion, Ruckley does a good job examining how Rubble’s murder has affected the volatile situation on Cybertron. Though Prowl’s feelings weren’t given a lot of focus compared to Bumblebee, his reaction to the latest murder is a clear distinction from Prowl’s previous IDW incarnation to the point he’s not only upset about Rubble, but is putting some of the blame onto himself as well. Ruckley also develops more of the political side to the story as Orion discovers a host of important bots are coming back to Cybertron given the circumstances, bots such as Sentinel Prime and Starscream of all people. It’s a quick moment in the issue, but a fairly significant one as the art shows just how much Orion has resigned himself to the bad news of their arrival.

The art team is back to three people as Angel Hernandez, Andrew Griffith and Anna Malkova split art duties on the issue. The art from the trio is pretty good as they each capture the emotions of the bots in various ways. Hernandez gets Bumblebee’s grief across through his body language while Griffith conveys Orion’s aforementioned resignment very well, though Herandez’s facial work and action choreography could be a bit clearer as the character’s faces aren’t as expressive as they could be while the action isn’t as easy to follow . Malkova, however, does well with both the emotions and action as Cyclonus receives a surprise visitor in the wasteland in a very fluid and animated, but brief, fight sequence that teases the next issue. Joana Lafuente and Josh Burcham’s colours are quite vibrant, whether it’s Bumblebee overlooking the sunset or Cyclonus and his spectral friends. Their work pops throughout and elevate the issue’s quality.

While Rubble’s death feels a little too soon and unearned, it has opened some pretty interesting doors. Bumblebee’s journey is the most interesting as Ruckley is doing something entirely different with him while the political element may get more of an emphasis with the impending arrival of Sentinel and Starscream. The combined art team does well depicting the character’s sense of loss and uncertainty, making Transformers #7 a nice visual chapter even if some of the emotion and action could have been clearer.