With less than three weeks to go until its arrives in cinemas, Signature Entertainment has released a poster and trailer for the historical epic Robert the Bruce. Directed by Richard Gray, the film stars Angus Macfadyen (Braveheart) in the title role as the legendary Scottish King, alongside a cast that includes Daniel Portman (Game of Thrones) Anna Hutchinson (Cabin in the Woods), Jared Harris (Chernobyl), Zach McGowan (Agents of S.H.I.E.L.D.), Patrick Fugit (Almost Famous), Kevin McNally (Pirates of the Caribbean) and Emma Kenney (Shameless); take a look here… 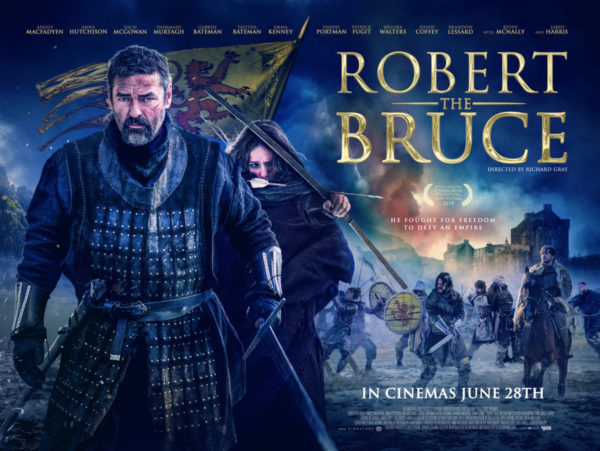 Scotland 1306, Robert the Bruce (Angus Macfadyen: Braveheart) crowns himself King and takes the ambition of Scotland’s freedom as his own. But he cannot overcome England’s power: defeated again and again, his army is scattered and Scotland’s nobility abandons him. Hunted, with a price on his head, he finds himself alone and wounded. The cause of freedom seems lost once more.

Hidden secretly in a secluded croft of a clan pledged to England, and close to death Robert is nursed back to life by a young widow and her orphaned children. His determination to do what is right, regardless of the cost, reinvigorates his passion to rise again. But it’s not revenge he desires. It’s freedom. Now.

Robert the Bruce is set for release on June 28th.