I don’t think anyone was expecting it on a Saturday but Microsoft has revealed the gaming gems heading to gamers this July.  As usual there’s more gamerscore for those achievement hunters to be gained. 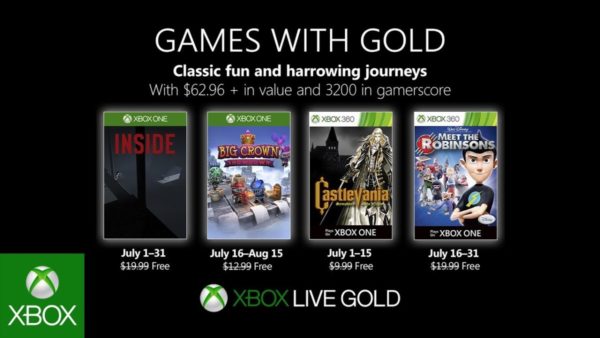 Coming to Xbox One on 1st July is the puzzle platformer, Inside.  In this 2016 adventure, players take control of a young boy who must escape his pursuers as he travels through a dystopian world.  As well as avoiding armed patrols and guard dogs, the boy will need to solve a variety of environmental puzzles in order to survive.

On 16th July, gamers will be able to take on their friends in Big Crown: Showdown.  This 4 player multiplayer combat game will see players fight their friends over 3 wacky worlds to become the owner of the crown.

For the Xbox 360, and Xbox One through backwards compatibility, is Castlevania: Symphony of the Night.  This classic platform RPG will take players deep into the heart of Dracula’s castle to defeat the self-proclaimed lord of the castle.

Finally, for the latter half of July, gamers will be able to download the game based on Disney’s mediocre kid’s film, Meet the Robinsons.

We’d love to hear what you think of July’s Games with Gold, so leave a comment below or chat to us on Twitter @FMyth_Gaming.