Tom Jolliffe with the latest delve back to the video shelf with 90’s video action stars [read part one, part two and part three]… 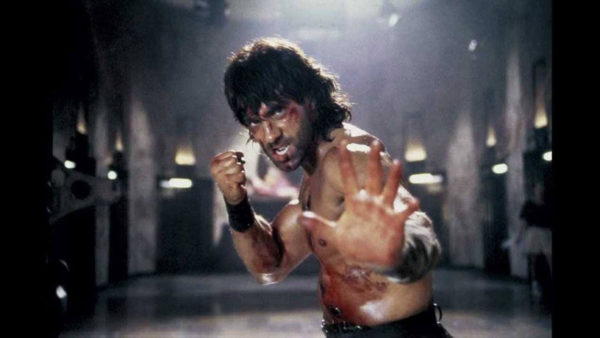 With so many 90’s action icons worked through already, you’d imagine I was beginning to struggle for subjects to cover. You’d be mistaken. It feels like I’ve barely scratched the surface of 90’s ass-kick specialists. This only goes to show that slightly wistful post-century turn which saw new kids on the block becoming fewer and further between. Inevitably as big ‘actors’ moved in on the big screen action genre in the 90’s, the next decade would see some heavy hitters becoming DTV action specialists themselves with the likes of Christian Slater, Cuba Gooding Jr and Val Kilmer becoming stalwarts, then beyond them even bigger stars fell into video land like Nicolas Cage, Bruce Willis and John Travolta. The desire for ass-kicking specialists and M.A tournament casting was largely a thing of the past.

Still, what is also interesting in looking back is the differing careers many of those 90’s video guys had. Many would do a small handful of films before drifting into obscurity. They either never quite had the presence, or just didn’t take to it, and indeed, the demand (or lack there of) meant there were less films being made in that market. If you look particularly at the early 00’s things dried up for almost every 90’s video action lead. It wasn’t uncommon to see the likes of Gary Daniels, Don Wilson, Olivier Gruner, Cynthia Rothrock et al have long gaps in their CV’s when the offers (and indeed for the kind of coin they were getting in their peak) weren’t there. The Expendables certainly helped with some revisionism and has seen many of those 90’s stalwarts work more solidly again (albeit often in bit parts). 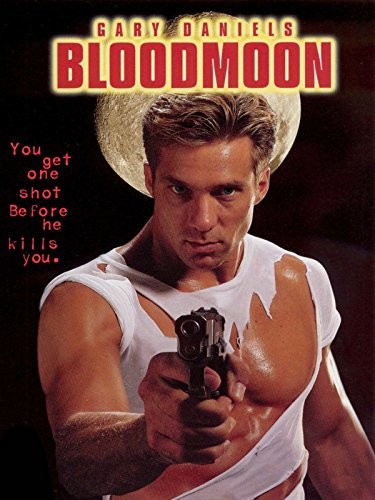 Britain’s own, Mr Gary Daniels, initially infamous for long lustrous, Chippendale-esque blond hair, became a solid fixture in the 90’s. His ‘big’ potential breakout was the first film which raised my awareness of him. That was Fist Of The Northstar. It had the source material that bought with it a ready made fanbase. It may have been fairly low budget, but even regardless, in comparison to the other works of the time with Daniels, the budget of Northstar seemed lavish. The film probably flirted with the prospect of a theatrical release state side, but ended up going straight to video. Some minor success in Asia, it ultimately ended up as a video property. Sometimes you get the one shot. This was probably Daniels’.

Of his prolific 90’s output, he was to PM Entertainment what Chuck Norris or Charles Bronson were to Cannon. There were a few less than stellar ones with PM but the three R’s, Riot, Recoil and Rage were the best, not only of what Daniels produced in that decade, but among the best PM did. I was loathe to fall into the trap of an easy pic like a Daniels/PM co-op. Instead, as I was busily writing a screenplay about Witches, which made reference to the bloodmoon, it brought to mind the Daniels action special, Bloodmoon, which involves…yeah…the bloodmoon (that’s when the moon looks red). 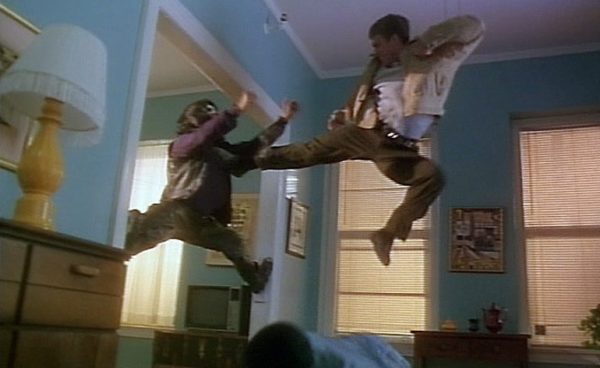 Bloodmoon is a film I vividly recollect even before seeing it. In the late 90’s there was this great show called Hollywood’s Greatest Stunts which as the title suggested, focused on the planning, prep and delivery of great stunts in an array of films, from the big boys like Indiana Jones, to including a lot of video specials like Bloodmoon (and indeed a lot of PM were also featured on it). It was a film I’d always sought to watch and eventually did. It didn’t disappoint. A fairly simple plot involving a serial killer targeting Martial arts champions and killing them to ingest their power (on bloodmoon) sets up a Seven (with kicks) cat and mouse chase with Gary Daniels and Eddie Murphy lookalike (and ex-kickboxing champ) Chuck Jeffreys chasing down the late Darren Shahlavi. A word on Jeffreys; It always puzzled me that he never really got a decent shot as an action guy. 3-4 ‘the partner’ roles aside, he never got a good go. In Honor and Glory the resemblance (looks and voice) to Eddie Murphy, and a kind of easy comic demeanour (combined with the kickboxing prowess) suggested he could have filled a DTV niche around that time. It wasn’t to be. Further, the late Shahlavi, a great talent, and solid actor, always seemed to be the bad guy.

Regardless, Bloodmoon is great fun. It’s loaded with excellent fights which benefit from a HK director (and Stunt-Coordinator) in Siu-Hung Leung. Daniels, Jeffreys and Shahlavi get ample opportunity to strut their stuff and the film, as Hollywood’s Greatest Stunts will attest, has some great stunts. It’s not quite Drive (Dacascos) level, but it’s a good HK style action film made in the US. 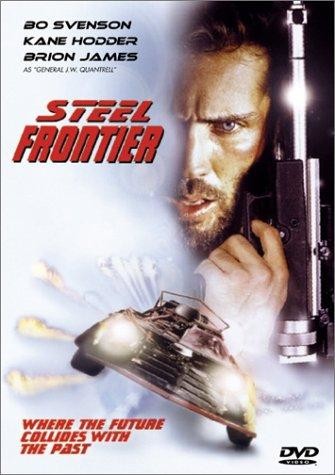 Watching Joe Lara, at times a modern movie goer could be forgiven for thinking that Jared Leto has been around a lot longer and re-invented himself after beginning life as a video action God. Such is the likeness between the two. If being harsh you might say that Lara’s similarities didn’t extend to acting ability, but we are talking Oscar winning Jared Leto, it’s hardly a sleight. Lara, by genre standards is fine.

Initially arriving as the 18th person to play Tarzan (he later played Tarzan again in a film and then TV series), Lara quickly established himself as a video action specialist. He looked more catwalk model than action man, but regardless had the requisite physique and enough charisma to do well. Among some Sci-Fi genre highlights he did Hologram Man, American Cyborg: Steel Warrior and Steel Frontier. Steel Frontier marks one of many 90’s video classics from the purveyors of destruction, PM Entertainment. 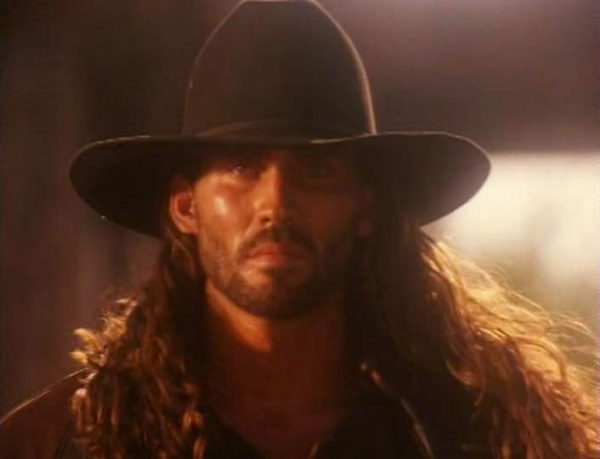 A Mad Max riff which includes all you’d want from a Mad Max riff. Steel Frontier is also part Western. It’s loaded to the brim with action and great stunts. The threadbare plot just about connects action scenes together, but Lara makes for a good Max/Eastwood and the film rifles along at a blistering pace. This is one people rarely see. For one thing, Lara never quite got the fanbase the likes of Wilson and Daniels had and would attract to DTV action fans. This one is well worth hunting out. Like all PM’s films, the only downside as essentially cable premieres, is they were all (I believe) shot in full-frame. Such is the vast scope of the wilderness setting and the nicely choreographed desert vehicle carnage that one can’t help but wistfully crave a widescreen format. This would most certainly be worthy of one.

C. Thomas Howell in The Sweeper 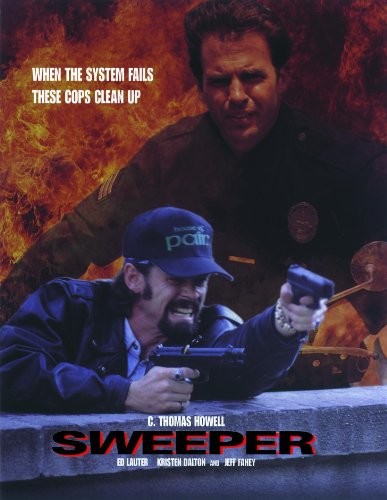 C Tommy Howell. A one time promising young thing from the 80’s, on the periphery of the brat pack et al, in such films as The Outsiders and E.T. It never quite happened. Eventually bad boy roles would merge into more action and by the 90’s, albeit now in the video arena, he was a pretty prolific action star. You could call him the unlikely every-man (given lack of kickboxing titles, roid pump frame or towering height) but regardless, Howell was solid and brought with him a certain nuance allowing for a bit more depth of character (especially gifted in the inherently flawed). 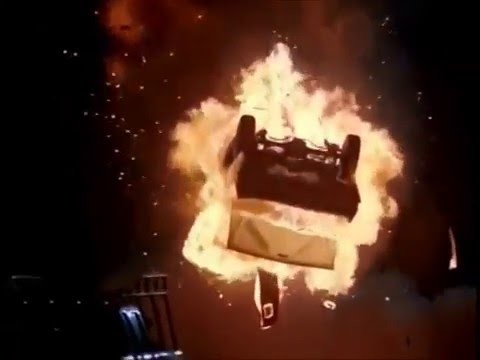 The Sweeper is yet another PM entry. Again, as many PM-ites tend to look back at the Wilson, Daniels, Wincott entries, this occasionally gets overlooked. It’s an epically good action film with epically crazy stunts (including a car to crop duster transfer). It’s non-stop, wall to wall action with long (perhaps drawn out) set pieces, but if bang for your buck is what you demand, The Sweeper delivers. The beauty of PM at their finest was the fact they could cut a trailer together that made the film look like it was shot for 100 million bucks in todays money. 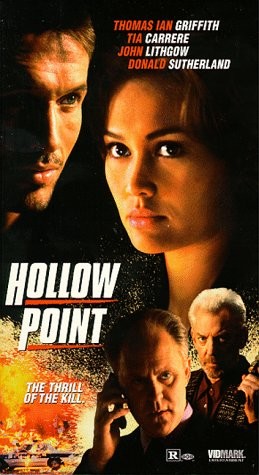 Much like Jeff Speakman, in the early 90’s there was a brief push by studios into making Thomas Ian Griffith an action man to rival Van Damme and Seagal. Excessive Force would feature artwork directly drawing comparison to Seagal, but even by the point Griffith was being pushed as a leading action man, Seagal’s popularity was already waning.

With easy charisma, the tall frame and kickboxing skills, Griffith had the arsenal, and whilst reasonably solid in the 90’s, didn’t quite end up being one of the more memorable video action specialists. Occasional bad guy turns in bigger properties like John Carpenter’s Vampires, or the Timecop sequel (albeit a DTV sequel), he seemed to drift away from the kind of films Gary D and Don W were doing and seemingly called it a day in 2007. 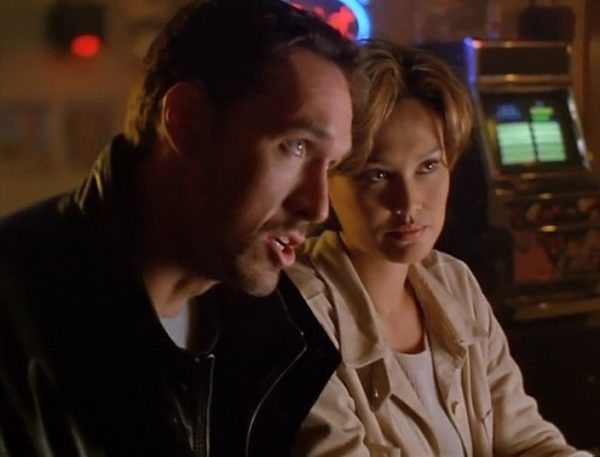 Hollow Point was a film I saw on its TV premiere in the UK. I recall watching it primarily because it had Tia (swoon…cold shower…swoon) Carrere in it. It was an enjoyable action with a dash of comedy. There’s plenty of aggro infused back and forth between Griffith and Carrere (swoon…wistful daydream out of window) and then to top it off, aside from the solid direction from the veteran Sidney J. Furie (Ipcress File) it also benefits from having John Lithgow and Donald Sutherland (who has great fun here) in the cast. Well above average for this kind of thing, it sensibly sets it phasers to ‘entertain’ and largely hits every target.

Have you seen any of the above films? What are your favourites from these action specialists? Hit us up on our social channels @FlickeringMyth…