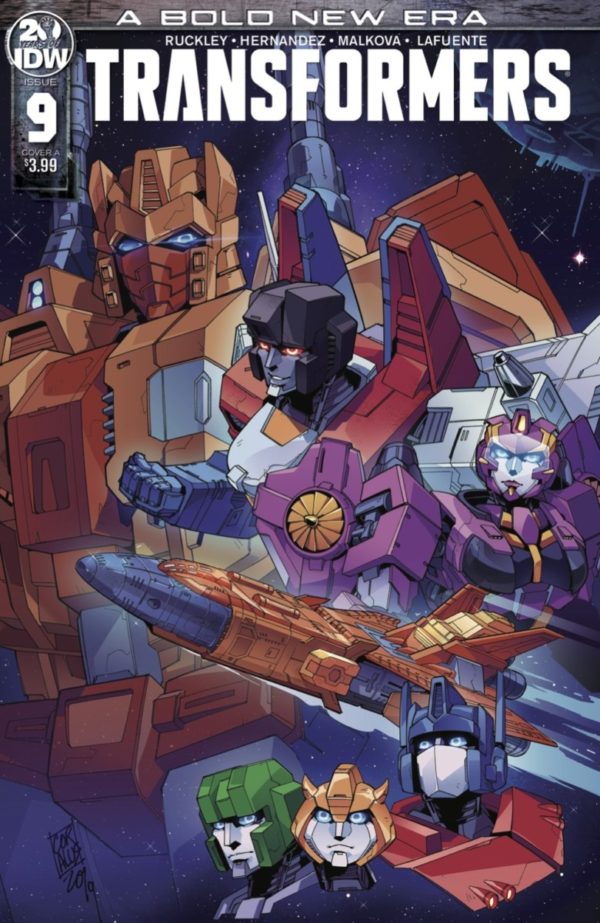 After starting with a really slow burn that kept going for several issues, Transformers has really gained momentum lately and the latest issue keeps it going very much as it’s pretty action orientated. While there isn’t much story progression, Transformers #9 still gives a sense of urgency as Chromia, Windblade and Prowl make some significant leaps in their investigations of the Rise. Brian Ruckley utilizes the characters and action well enough with a nice balance of both.

Most of the issue centres around Chromia, Windblade and Sideswipe investigating Cyclonus’ discovery of a Rise base and the fight that follows. It was a surprise to see Sixshot return to the Transformers as a leading member of the Rise and fight Chromia and Windblade himself while Flamewar fought off Sideswipe. Sixshot was presented as an intimidating bot, though it’s unknown if he’s as powerful as he was in the previous IDW continuity. The fact he took Windblade’s sword through his chest though indicates he’s still a pretty tough bot.

It’s not all action as Ruckley devotes a bit of time to the bigger story and progresses it in a couple small but meaningful ways. Prowl makes a seemingly significant leap in his own investigation as he learns Barricade may have had more of a hand in event than he thought while said bot has joined the Ascenticons, handpicked by Soundwave himself. While it may not be much, it definitely adds a bit more of a question to the Ascenticons’ motives. Curiously, though, half of the teases on the issues official synopsis did not happen. Though Sentinel Prime and Starscream take prominence on the cover, they were no where in sight. It’s a little disappointing since they haven’t appeared in the series yet aside from a few scant mentions, making it seem like there was some behind-the-scenes changes to push their arrival back a bit, but Transformers #9‘s focus on action and mystery over Cybertron’s political situation was a welcome one.

This marks Angel Hernandez’s first major fight sequence in the series and his artwork nicely choreographs the fight with Sixshot, making the action smooth and easy to follow. It’s exciting and tense as he shows how outmatched the two Autobots are against Sixshot. Ruckley’s script also makes a point to show Sixshot is more than just a big brute as he uses a couple cunning tricks to get the best of Chromia, lending more credence to his position as a threat. While Hernandez captured the fight, Anna Malkova dealt with some of the more quieter scenes, namely Prowl’s investigation and Bumblebee’s meeting with Elita-1 and other Ascenticons. She does some great facial work with her characters and expressing the shock on Prowl’s face after learning of an inconsistency with the case or Barricade’s smugness as the latest recruit to the Ascenticons. The art all round from Hernandez and Malkova is nicely done with Joana Lafuente’s colours providing a nice palette of varied brights and darks to the issue.

Transformers #9 was another step in the right direction as Ruckley and Hernandez delivered a pretty solid fight between multiple bots and made some significant strides in the story’s central mystery. Some dots are beginning to connect now and Ruckley is doing a good job of making those connections while raising the intrigue up a couple degrees. While we have to wait another issue to meet Sentinel Prime and Starscream, hopefully the extra weight will be worth it but for now Transformers is on the right track again.