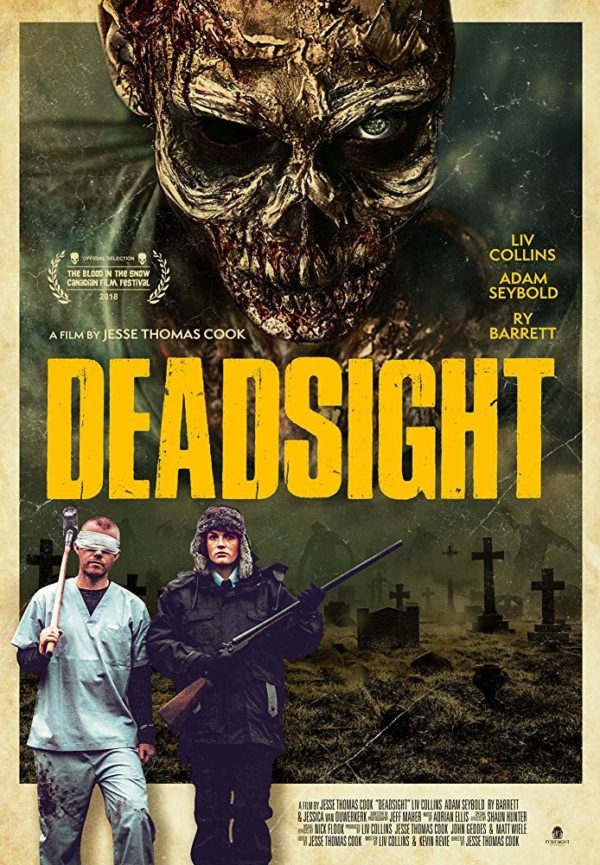 A man with partial blindness and a young pregnant police officer must work together to escape from a deadly virus that has spread across Grey County. 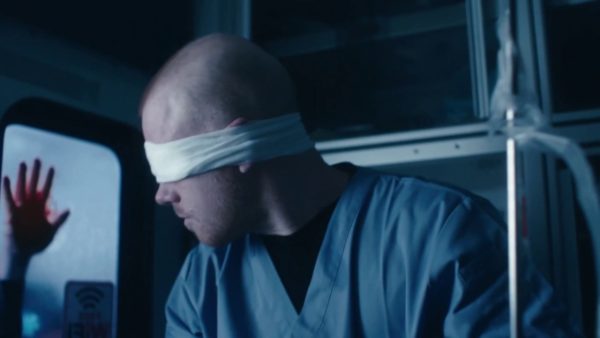 Jesse Thomas Cook’s take on the zombie genre begs an unthinkable question of circumstance – how would one survive the apocalypse without eyesight? Deadsight isn’t about redefining subgenre mythologies, but instead ponders how impairment would hinder survival chances. The filmmaker behind Septic Man and Monster Brawl enjoys playing outside genre normalcy, yet struggles to wash the rotten stench of walker generics from his unique character viewpoint (or lack thereof). It’s an undead flick void of reinvigorated vision – meant both literally and figuratively in this case.

We meet Ben Neilson (Adam Seybold) in a Rick Grimes scenario: regaining consciousness inside a medical environment amidst an apocalyptic outbreak. Ben has an even worse disadvantage – he’s currently handcuffed to a gurney in the back of an ambulance, fresh off eye surgery that’s robbed his sight. Using nothing but his alternate senses, Ben escapes the vehicle and encounters a pregnant police officer wandering sans transportation. Mara Madigan (Liv Collins) must act as Ben’s eyes if they’re to survive a viral flu shot epidemic turning victims into snarling primal attackers. One weakened, her water about to break, the other completely left in visual darkness. Not great betting odds.

From graveyard chases to red-light saturation in power plant hallways, Cook pays homage to George Romero classics of old and 28 Days Later outbreaks of new. The issue is, Ben’s blindness only permits choice interactions with zombies if he’s to last long enough into Liv Collins and Kevin Revie’s screenplay. It’s a rinse and repeat cycle of Ben fending for himself, landing a few lucky defensive whacks against advancing lurchers, and retreating far enough away to replay the altercation. Mara offers aid early on, but just as hastily splits from her newfound partner to locate the abandoned ambulance from Ben’s introduction. Cue more blurry stumbling, random interjections from passersby, and Ben’s staying alive by coincidence alone.

Deadsight is the kind of horror flick that muddles a story where its characters aren’t fleshed beyond initial face-value assessments. Why doesn’t Mara take Ben with her, instead of leaving him to fend for himself in a “secure” hideaway where zombies bash through windows? Why doesn’t Ben, who fully understands there’s an infection spreading, not only fail to execute afflicted Gator (Ry Barrett) as per his last wishes, but then wastes two bullets and ignores the spastic pre-zombie before he becomes a rabid threat? Scene by scene the plot thickens, but it’s a weak and flippant push forward that fails to sell the blind man/pregnant woman combo who keeps skirting imminent danger. You know, because Ben’s capable of ripping headshots from long distance with a shotgun…without hitting Mara who’s clearly in the spray trajectory? 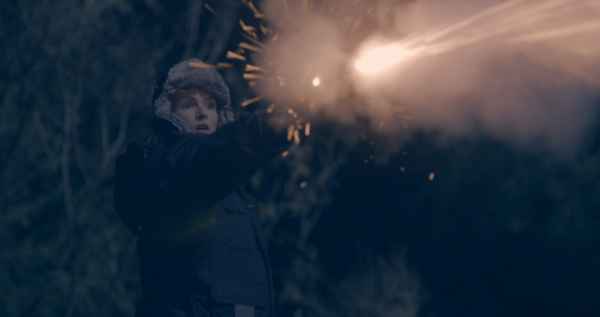 These seem like trivial complaints, but cohesive storytelling is the glue that holds horror together. Gore and gunshots only excuse so much. Cook’s handling of laborious devices – blindness and pregnancy – manifests in weaknesses only when threats diminish. Ben’s always able to fend off attackers despite cloth covering his eyes, while Mara’s “stress-induced” flareups take hold post-undead extermination. Otherwise, there’s very little to a dynamic duo with shady histories (Ben’s handcuffed for reasons never fully explored), while their arcs project nothing but overdramatized The Walking Dead variants. Despite intrigue via hardships, Ben and Mara’s journey is rather uninteresting…dare I say pedestrian zombie affair.

Special effects vary from practical grisliness to visual explosions of blood, the latter always a tad underwhelming. Ben headshots a few skulls into oblivion, leaving only a gushing torso, but animation reigns supreme except when actors drool chocolate-syrup-lookin’ gunk while transforming. The body count isn’t super high as far as human victims, but between Mara and Ben, action does its best to jolt blue-colored atmospheres awake with ammunition pops. Cinematography and scoring aren’t anything more than indie horror get-by quality, and I can’t say much different for the gruesomeness that’s depicted on camera.

You can’t fault Deadsight for trying something different, but as mentioned before, Jesse Thomas Cook has previously executed “ridiculousness” on a more enjoyable/engageable level. Ben’s blindness and Mara’s due date are nothing but shock-value additives, only inhibiting their hosts in the least necessary times. With more expanding upon their relationship or drama between human characters, there’d be something meatier here. As is, Cook’s responsible for nothing but a run-of-the-mill survival story that struggles to creatively manipulate focal obstacles. You’ve witnessed this kind of rinse-and-repeat “flee from zombies” content before, even considering the protagonists involved.