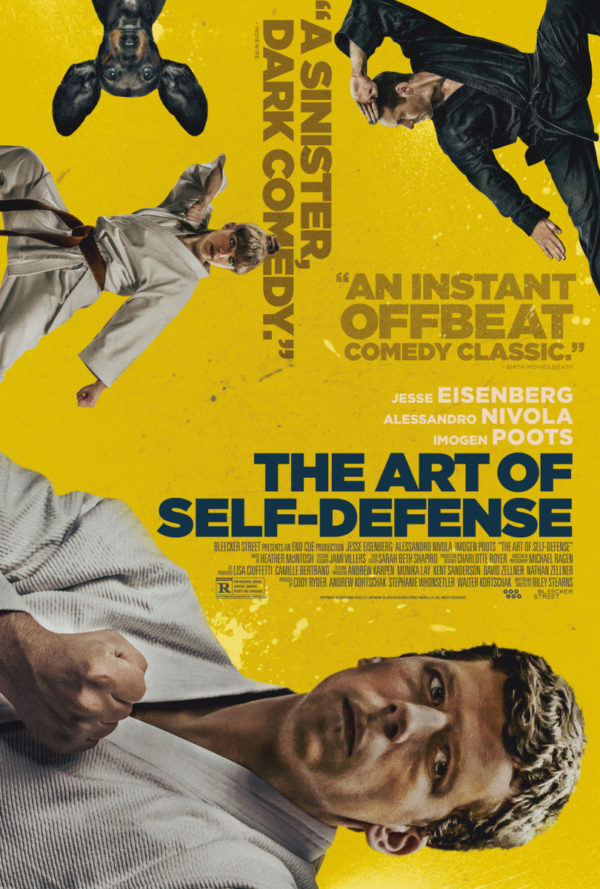 A man is attacked at random on the street. He enlists at a local dojo, led by a charismatic and mysterious sensei, in an effort to learn how to defend himself. 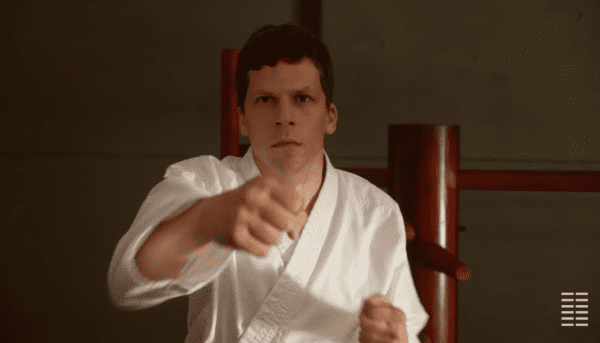 If there was ever a good time to discuss the very concept of physical self-defense, 2019 seems one of the most appropriate. It’s an age where one person might feel completely safe walking the streets without a single form of self-defense and another might find comfort concealing anything for protection, whether it be something brazen and potentially dangerous like a firearm, something light such as pepper spray, or weaponizing the human body by practicing karate. And then when you account for the divided times we live in, both scenarios will assuredly be supported or condemned by all types of people, with an objectively correct answer nearly impossible to pinpoint. As far as I’m concerned, there is no right or wrong answer; do whatever makes you feel safe as long as it’s not hurting anyone

Writer and director Riley Stearns (this is the filmmaker’s sophomore feature-length film some years following the underseen Mary Elizabeth-Winstead starring gem Faults) isn’t so much grinding an axe with the notion of buying a handgun for protection or signing up for karate lessons, but simply the toxic humanity that can come from associating with such hobbies. The Art of Self-Defense doesn’t laugh at the art of self-defense, but more so how much unnecessary worth comes from colored belts and brandishing a gun or having the knowledge on how to jam a finger through someone’s skull; it’s not really anything to brag about… it’s self-defense. Going to such extremities is surely not necessary, but it’s easy to lose one’s self in the inherently violent environment of their surroundings. 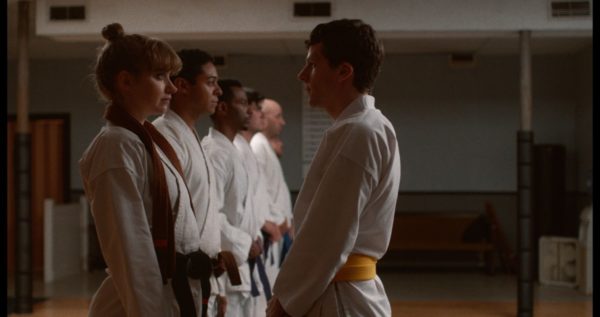 Jesse Eisenberg is the perfect vehicle to explore all of these themes, here playing Casey, a sadsack of a man with seemingly no family or friends, and suffering from through the roof social awkwardness/anxiety. And while he doesn’t necessarily seem happy, his life is all right; he has a likely decent paying office job, he is learning French (but is dragging his hands on actually taking a vacation to visit his dream destination), and finds some company in a tiny adorable dog waiting for him upon his arrival home from work every day. He is also shunned by his coworkers and lacks the confidence to verbally stand up for himself. All of this amplifies on his way home from a dog food grocery run one night where he is confronted by a helmet-wearing motorcycle gang and beaten with an inch of his life, but not before being asked if he is carrying a firearm (a small detail that is far more important than it might lead on and for multiple reasons).

Experiencing a great degree of trauma and PTSD from the attack, Casey explores his options to defend himself in the event of a future similar life or death battle, nervously and amusingly asking a gun store owner if they carry any guns that will fit in his hands to enrolling in a dojo led by an enigmatic non-named sensei (Alessandro Nivola, exuding a necessary cultlike personality). Training at the dojo during the day quickly becomes an obsession for Casey (he ignores going to work until his vacation time runs out), deriving faux self-worth from his dedication and commitment to sharpening his body, so to speak, even if he still can’t actually punch through a wooden board. Obviously, Jesse Eisenberg looks and sounds the part of a lanky punching bag that doesn’t have the social skills to fit in anywhere, but he’s also brilliant at selling the mental gymnastics manipulation the sensei pulls on him. It’s not long before Casey trades in all of his hobbies for more “manly” ones, some of which are hilariously spot-on and others that unfortunately are outdated stereotypes (yes, metal is obviously the most aggressive music there is but saying it encourages violent behavior is basically the same as saying a person will become a criminal from playing Grand Theft Auto). 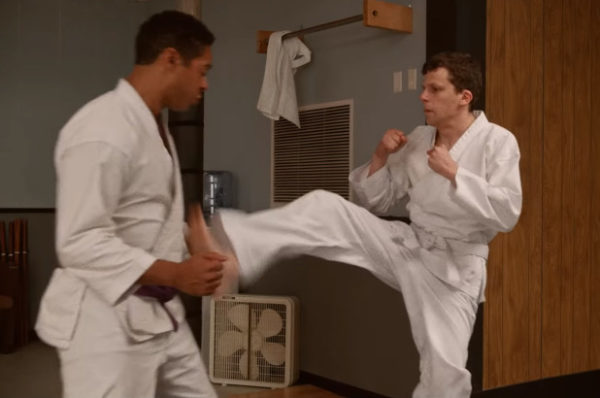 Nevertheless, the overall approach to the type of masculinity and the idiosyncratic environment is executed strongly. There’s even a female enrolled in the program named Anna (Imogen Poots) that is far more purposeful than serving as the only person holding Casey’s dwindling sanity together. She’s a woman in a testosterone-fueled man’s world, and she has some stories to tell that are sadly not surprising but will rock you nonetheless. It’s not really clear why she’s there, but I’m assuming she’s just a normal individual that found the concept of self-defense intriguing and signed up, only to enter into a situation I can’t quite explain without spoiling key plot points. Nevertheless, she is a fascinating character in this oddball small society where violence solves everything deserving of more backstory. She’s also only a small part of what’s really going on in this thriller, which goes beyond toxic into something far more disturbing. Perhaps what’s scariest of all is that during the day lessons are given to children, a point that is deliberately brought up once again during the ending credits.

The tone of The Art of Self-Defense could be compared to Fight Club (both movies are satires of an ugly ideology of manliness), but certainly more progressive. Humor is pitch black with the bursts of violence going all in on mangled faces and devastating looking martial arts maneuvers. What’s most intriguing is that the dojo has an all-important role of never using firearms, something the film’s ending thoughtfully complicates. It can be difficult to tell what and what the film isn’t endorsing or tolerating, but it’s absolutely a scathing takedown of the toxicity certain environments and mindsets can bring. The Art of Self-Defense adds to many ongoing relevant conversations while never losing sight of the very precise target it is putting on blast. Become a black belt if that’s what you really want to do, but derive self-worth from the grueling physical education it took to earn the prestigious label, not the ability to fight itself. Reserve that for self-defense.