Games with Gold for August have been revealed and there’s some pretty impressive titles on offer.  Intense action, intense driving and more will be coming to players this August. 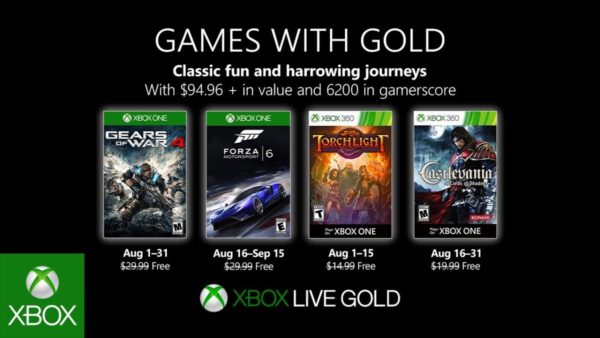 August brings gamers Microsoft Studios’ Gears of War 4.  This third person shooter takes place 25 years after the events of Gears 3 and follows the story of J.D. Fenix, son of Marcus Fenix and Anya Stroud, as he fights a new threat known as the Swarm.  If you have yet to play Gears of War 4 then this is the perfect opportunity to give it a whirl before Gears 5 comes out later this year.

The second Xbox One title of August is Turn 10 Studios’ Forza Motorsport 6.  This title allows players to race through different events and along different courses in a multitude of cars from well known manufacturers.  Players can compete in championships that feature multiple races through different weather conditions.

For the Xbox 360, and backwards compatible with Xbox One, is action RPG hack and slash Torchlight from Runic Games.  This fantasy RPG takes players to the town of Torchlight and the nearby caverns and dungeons that players will need to explore in order to defeat the many monsters and gain the valuable loot.

Finally, Castlevania: Lords of Shadow is a third person action adventure where players follow the story of Gabriel Belmont as he sets out on his quest to defeat the order of the Lords of Shadow, and resurrect his wife.

Are you excited by this selection of games? Does it beat the recent games we’ve been getting?  Share your thoughts in the comments below or on Twitter @FMyth_Gaming.