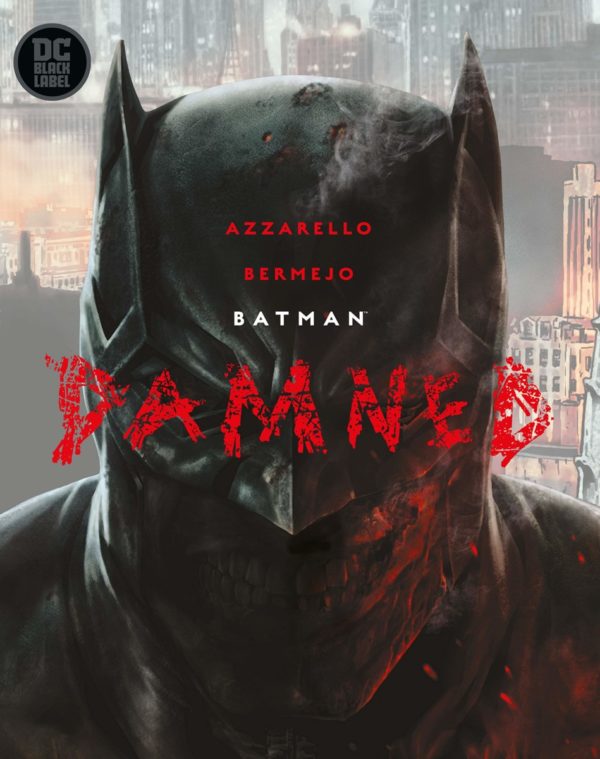 The inaugural offering from DC’s Black Label, a new imprint designed to give creators the opportunity to explore the iconic characters of the DC universe with mature, standalone stories free of the constraints of continuity, Batman: Damned reunites writer Brian Azzarello and Lee Bermejo, the creative team behind 2008’s Joker, for a supernatural horror mystery which also serves as a sequel of sorts to the duo’s hit graphic novel.

Damned sees Batman coming around in an ambulance, with no idea of how he got there, nor how he sustained the injuries which threaten his life. After making his escape, he’s saved by John Constantine, and wakes the next morning with no memory of the previous night. And as it happens, it’s been a rather eventful night – The Joker’s reign of terror having finally come to an end with the Gotham City Police Department fishing the Clown Prince of Crime’s corpse out of a river.

Convinced that he couldn’t have broken his no-kill rule, the Dark Knight sets out to unravel the mystery behind the Joker’s murder. Embarking on a journey through the sordid, supernatural underbelly of Gotham with Constantine as his guide, Batman’s investigation leads to encounters with the likes of Deadman, Zatanna, Swamp Thing, Etrigan and the Enchantress, along with a confrontation with Harley Quinn which will likely prove divisive with fans.

Even with the removal/censorship of Bruce’s Bat-cock (DC having caved in to the controversy surrounding the nudity on display the first issue), Batman: Damned certainly lives up to its mature label; it’s a dark, grim and violent tale, perfectly brought to life by the absolutely stunning painted artwork of Lee Bermejo, delivered in a splendid prestige format. Unfortunately, the story gets a little messy, and just can’t manage to live up to the art.

The version of Batman we get in Damned never feels like the World’s Greatest Detective; in fact, the Dark Knight seems to be the only person here who doesn’t have any of the answers to the unfolding mystery (well, along with us the readers) and jumps from one supernatural encounter to the next without ever learning anything new. The narrative certainly raises lots of questions, several of which go unresolved (the rather interesting twist on the relationship between Thomas and Martha, for one), and the answers that do come are perhaps a little too unsatisfying and ambiguous, even if they’ve been intentionally left open to interpretation.

Although the story didn’t grab me as much as I wanted it to going in, I did feel compelled enough to revisit the book for a second read through that same day, hoping to pick up a few more clues or at least help me solidify a decent theory as to what exactly was going on. Was I any the wiser second time around? Did I enjoy it more? I’m not even sure, really, but I do intend on returning for a third time at some point – and as there’s not many books that get that from me, I have to say that Batman: Damned is success in that regard.

While its sure to split opinion and will no doubt leave some fans cold, Batman: Damned is certainly worth a look if for no other reason than to admire Bermejo’s incredible artwork.