Throughout gaming history the humble ‘Platformer’ has been a mainstay within most gamers’ libraries.  Reason being, quite frankly, the rules are fairly simple. Walk or run on numerous platforms, gather the strewn items, dodge (or squash) the well placed meanies and then progress further onto more perilously-placed platforms.  From Manic Miner on the ZX Spectrum all the way upto the current day release of Super Mario Deluxe on the Nintendo Switch.  Run, jump, dodge (or squash), collect and repeat.  Looking back through the vast library of games and it’s with Super Mario that Super Wiloo Demake takes most of its gaming beats from. 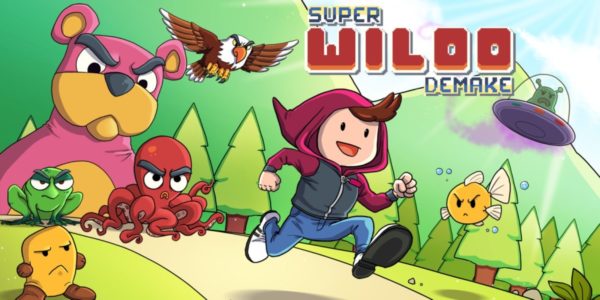 Developed by LightUp and published by Ratalaika, Super Wiloo Demake is both bright and colourful.  This 8-bit inspired platformer finds our hero Wiloo on a mission to rescue their dog from the evil clutches of Dr. ETvaldo. It’s a simple affair of keeping going to the right, collect the coins, jump on the enemy mobs and once you get to the end of 10 levels – of each world – you fight a “Big Boss”.  If you had a tick sheet of what you’d like to find in a platformer, on the initial play of Super Wiloo Demake, you’d hit all the favourite boxes almost immediately.

Where this pleasant platformer begins to falter is down to the fact that rapidly, everything becomes somewhat overly familiar.  Granted after ten levels the world changes to a different landscape, so you’ll go from a Grassland to say Iceworld, then Seaworld and so on, but you’re stuck in that World for ten levels.  So familiarity starts to kick in and with the rather samey tune repeating in the background, Super Wiloo Demake soon becomes less fun than it should be.  Not even the boss fights bring in any excitement, for each practically have the same mechanic as the last and you feel slightly cheated after trudging through ten levels of sameness. 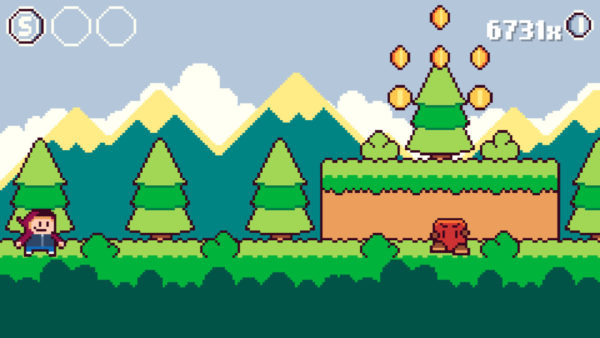 There are of course items throughout that try to break-up the monotony.  These range from the:- Unicorn suit (Shoots horns) Turtle suit (helps you swim) Bee Suit (Helps you fly) Woodlouse/possibly aardvark (Helps you spin the enemies to death).    The odd thing also is these suits make absolutely no difference to the end of level “Big Boss” fights.  So I hoped that marching in, dressed as a Unicorn, repeatedly firing horns at the bear would have ended the battle quicker, but no!  I still had to slowly rinse and repeat the jump manoeuvre.  Also still these suits can’t bring 10 levels of green, light blue, sea etc to a happy place, honestly having each world mixed up would have been much better.

The other item(s) available to collect where the numerous thousands of coins and the three major coins per level.  Now, other than opening the bonus ‘Go Fish’ levels found mid-World(s), I couldn’t see any purpose for collecting the major coins and absolutely no purpose in collecting the regular coins.  Of course these do aid Achievements, that goes without saying, in which – as with all Ratalaika games – there’s a few to get. 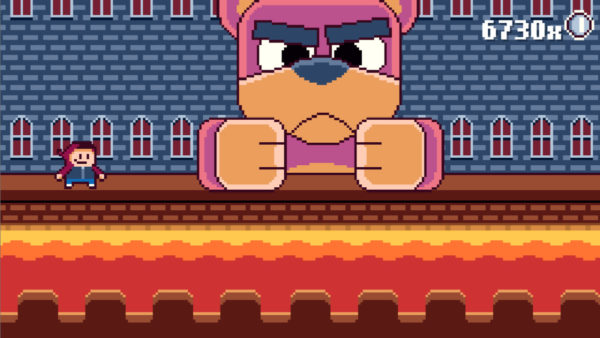 It’s a shame that the Super Wiloo Demake suffers from these moments of boredom.  To look at it you’d instantly believe it’s a great little game.  The animation when you jump on a meanie looks splendid as it flies at the screen, the basic story is fuzzy enough to warm our cold gamers hearts and the games controls are simple enough to master in a matter of seconds.  There’s just not enough variety scattered through the individual worlds, nor real thought put into the boss fights to give the game any sort of return factor.

It’s harsh to say, but there’s much better Ratalaika games out there and before you spend your money on this I’d look at their extended library first.

This Super Wiloo Demake was reviewed on the PS Vita, it is also available for the PS4, Nintendo Switch & Xbox One.