The Flickering Myth writing team share their thoughts on the new trailer for Star Wars: The Rise of Skywalker…

On Monday evening, Disney and Lucasfilm unleashed the final trailer for the final chapter of the Skywalker Saga, giving fans our best look yet at J.J. Abrams’ series-closing Star Wars: The Rise of Skywalker. With the pressure on Abrams and Lucasfilm to deliver a worthy climax to the tale – particularly after the mixed reception to Star Wars: The Last Jedi and box office underperformance of Solo: A Star Wars Story – did the trailer succeed in whetting appetites for the blockbuster’s release this December? Here’s the thoughts on the FM writing team…

Tom Beasley – At this point, I can’t think of a series of films that has so consistently knocked it out of the park on the trailer front. Almost every glimpse of the new Star Wars trilogy has rendered me a weeping wreck with goosebumps in places I didn’t know you could get goosebumps. This one is no different. From the soaring blasts of score to the epic spectacle to the emotionally savage use of Carrie Fisher in the final voiceover, this is a delightful example of a trailer that feasts on our heartstrings while maintaining the secrecy of the plot. I have spent most of this year wondering why I don’t feel massively excited for Star Wars. But they’ve got me now, those terrible geniuses.

SEE ALSO: J.J. Abrams claims Star Wars: The Rise of Skywalker will provide a “cohesive” ending to the saga

Shaun Munro – Tempering my expectations because I can’t shake the feeling Abrams is going to walk back a lot of The Last Jedi’s bolder storytelling decisions and overdose on patronising fan service (even for the standards of Star Wars), but it looks undeniably gorgeous and epic.

Laura Jorden – That iconic music theme draws you in like a magnet. The nostalgic voice overs pulling every heart string whilst revealing nothing, is impressive, and there are some stunning visuals to behold, so it has me hooked. I’m excited to discover how the powers that be have used their own force to complete this sweeping Skywalker story, as the galactic saga light speeds towards its epic climax.

Martin Izzard – It does what a trailer should in that there’s a lot to like but not enough context to put anything plot-related together. Disney’s trailer game is the best out there and this is no exception. The use of the theme and the very classic-looking Star Wars visuals hit the right notes now but on the big screen come December will mean something very different. For the amount of flack TLJ got, leaning in to the ‘end of the Skywalker Saga’ must mean that Abrams has got confidence in what he’s sticking on screen. That being said I preferred his vision of Star Wars over Johnson’s so I’m really looking forward to this.

Allen Christian – It looks really pretty, but this trailer was hammy. They had to rely on C-3PO for the emotional beat, because they don’t have any of the core original cast now. It tried so hard to stir an emotional response that this new trilogy just hasn’t earned yet. I’ve actually enjoyed all of the new Star Wars movies. But I think being consistently underwhelmed by the trailers and going in with zero hype every time has made that easier.

Ricky Church – I was not prepared for the emotion this trailer delivered. It hit all the right notes for me and though the moment with C-3P0 is the most attention grabbing, the ending with Mark Hamill and Carrie Fisher of all people saying those iconic words was great. No surprise since its J.J. Abrams, but the visuals once again look stunning. I’m really intrigued by some of the battles they showed off. Plot wise I would have liked to know a little more regarding what the actual story is, but I appreciate how this trailer gave nothing away really and merely teased some of the big moments in the film. December can’t get here fast enough!

EJ Moreno – It was a decent trailer that let viewers in on just enough. Do I trust JJ to wrap this story up? Not at all, but it does seem like he’s continuing a lot set up in Last Jedi, so points for that. I’m cautiously looking forward to this, but have no skin in this game as Star Wars normally isn’t my thing

Alec Frazier –  I am extremely grateful for this trailer. I personally feel that Disney has successfully mined gold ever since coming into possession of the Star Wars properties. The storytelling has been rejuvenating, and the characters engaging. I am thrilled to see Rose Tico in this trailer, despite the rampant racism and sexism her character faced. The moments with General Leia almost moved me to tears, and the moment with C-3PO actually DID. I am absolutely floored that they got Ian McDiarmid to return. He was the only consistently good thing about the prequels. There is an urban legend about Star Wars. It says that George Lucas desperately wanted to make a science fiction version of the Epic of Gilgamesh, but could not get the rights, so he came up with a similar storyline, and Star Wars was born. This trailer has me feeling that the ending will be worthy of that beginning.

SEE ALSO: The Rise of Skywalker is the longest Star Wars film to date

What did you make of the new Rise of Skywalker trailer? Do you have faith that the film will deliver a fitting conclusion to the saga? Let us know in the comments below or tweet us @FlickeringMyth… 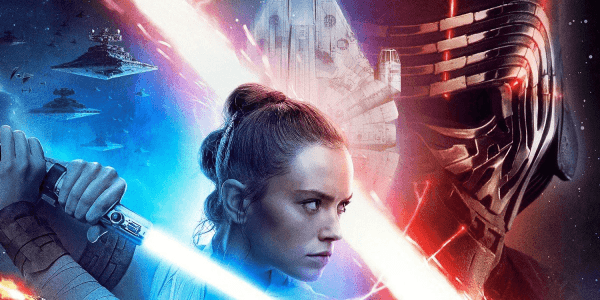