Anghus Houvouras on Rick and Morty… 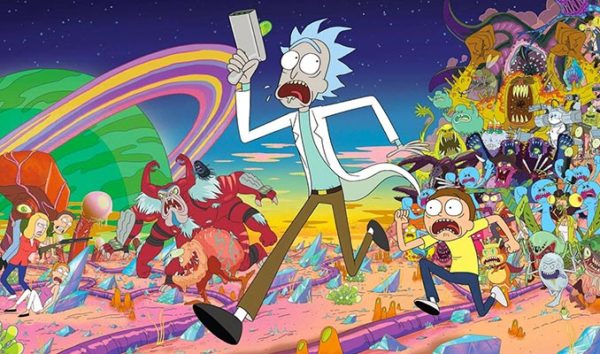 What are the best animated series ever produced? It’s something I’m going to explore in my next column. Animation is such an exciting medium with so much untapped potential. Probably because it wasn’t taken seriously for so many years, written off as a form of storytelling for children. Even after Walt Disney revolutionized the genre in cinemas, the stories were still relegated to simple fairy tales that could be appreciated by ages eight to eighty-eight.

Animation on television took a similar route with the vast majority of animated series appearing on Saturday mornings or as holiday specials. There were brief flirtations with prime-time animation during television’s golden age, but it wasn’t until the tail end of the 20th century that American networks began experimenting with the idea of an animated series aimed at a post-pubescent viewing audience. The Simpsons helped usher in this current gilded age of animation we currently live in with smart writing, well-developed characters and biting satire. Every single animated series since then owes a debt to Homer, Bart, Marge, Lisa and Maggie. 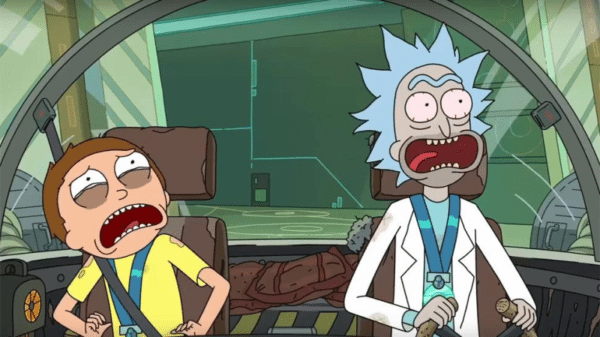 The 21st Century has seen the medium evolve in the promise of its potential. The animated series has become as diverse as their live-action counterparts. There are so many shows that have perfectly embraced the ‘anything is possible’ nature of animation and filled it with rich, three-dimensional characters. There are parts of the world that were way ahead of the curve on animation aimed at an adult audience. America took its sweet time embracing animation as a serious storytelling medium.

I can remember the first time a piece of animated content resonated and I realized the deeper possibilities of the medium. It was a wonderful piece of hand drawn animation from the 1970’s. An adaptation of the Oscar Wilde story “The Selfish Giant“. A fairly simple story of the perils of selfishness draped heavily in the tenants of Christianity. A Giant builds a wall to keep children out of his garden. Eventually his cold heart melts and he tears down the wall becoming a friend to all the children in the village. What struck me as I watched the show wasn’t simply the emotional growth of the character, something six-year-old me wasn’t exactly sharp enough to understand. It was seeing the character age, grow old and eventually die in the span of 30 minutes. That was a profound moment of discovery delivered in a way that might be difficult in any other medium. For me, The Selfish Giant showed the depth and promise of animation. Something that comes to mind when thinking about the best works of animation, and in this case the best animated series ever. 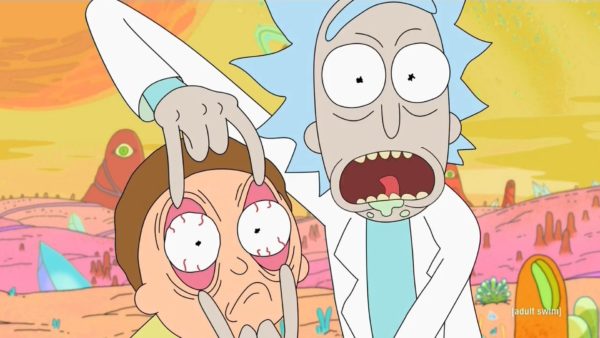 As soon as this column began to materialize in my brain, I started to hear the pushback and counterpoint that would emerge. There will be at least two dozen people who accuse me of being a prisoner of the moment. Rick and Morty has never been bigger. It’s a staple of the geek community and about to premiere its third season. The show has had a buzzworthy year after a surprise third season premiere on April Fools Day. The show has been rocketing in popularity since season one and has become the water cooler animated show. But as I rewatched the first two seasons this week, it calcified the idea that I was watching a show that in two short seasons managed to achieve a kind of perfection that few programs ever achieve. In defense of any detractors to this opinion, we might have been saying the same thing about Lost after season two and we know how that turned out. Regardless, here’s my breakdown of why Rick and Morty is the best animated series ever. 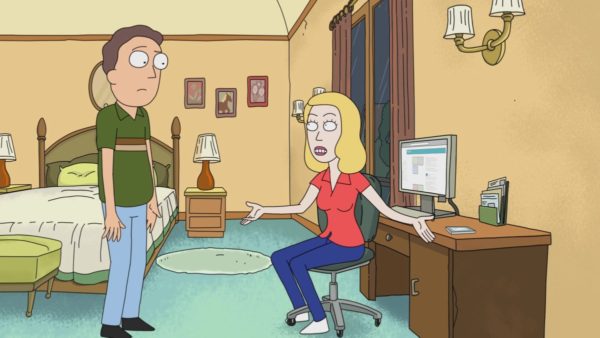 A good show requires good characters. Please take a moment to shout DUH at your screen. Rick and Morty’s characters are among the best realized in any show, animated or otherwise. This is a show with a ridiculously deep bench. You would expect a show named Rick & Morty to develop the two title characters, but I’m consistently impressed with how much time is spent diving into the psyche of Beth, Summer, and Jerry. In two very brief seasons we have five extremely well crafted characters. An unlike most animated series, they are given the opportunity to grow.

Rick Sanchez is a such a wonderfully manic character. A self-loathing genius with addiction issues struggling to find peace with himself and the world around him. Thematically, Rick feels a lot like BoJack Horseman. Both are self-indulgent people who struggle to find meaning in their existence. BoJack is imprisoned by vanity and validation while Rick is imprisoned by his own knowledge that life is ultimately meaningless. 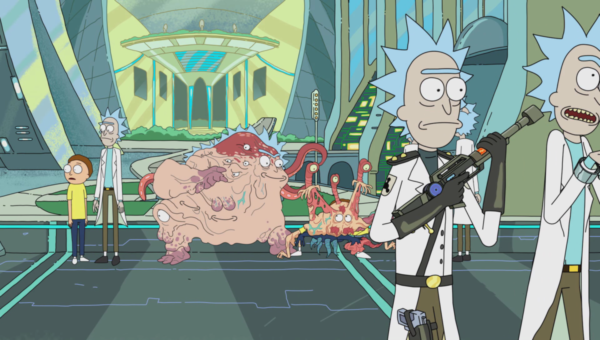 Lots of animated shows end up stuck in a state of perpetual reset. A show like South Park or The Simpsons present a wild scenario with crazy shenanigans only to have the whole thing reset as soon as the final credits roll. Characters don’t age, relationships remain static and the show stays in a permanent state of stasis. In South Park, Kenny dies and comes back the next episode. In Rick and Morty, Rick destroys the world by accidentally turning everyone into Cronenberg monsters and has to skip town via portal to another universe to take over for another Rick and Morty who have accidentally killed themselves. Morty, somewhat haunted by this fact, brings up the fact that there’s a dead doppelgänger rotting in the backyard. Everything that happens in the weird, wild world of Rick and Morty has a consequence. Even when they hit the reset button (like with the absolutely mental third season premiere), the characters aren’t in the same place. They carry over their experiences and the baggage that comes with it.

One of my favorite Simpsons episodes is ‘Homer’s Enemy’ where Homer’s existence tortures Frank Grimes who watches the doofus incompetently stumble from one great experience to the next. Frank Grimes is haunted by Homer who has without effort achieved so many enviable things in life. This eventually drives him to madness and death. It’s a dark, hilarious examination of animated reset button. As the unloved, uncared for Frank Grimes is lowered into his grave plot, Homer talks in his sleep making the congregation chuckle. The universe remains unchanged. There’s something to be said about the comedic brilliance and potential of the reset button that almost every single animated series takes advantage of. Rick and Morty does it in a new way and it gives the characters and the universe resonance. Speaking of the universe… 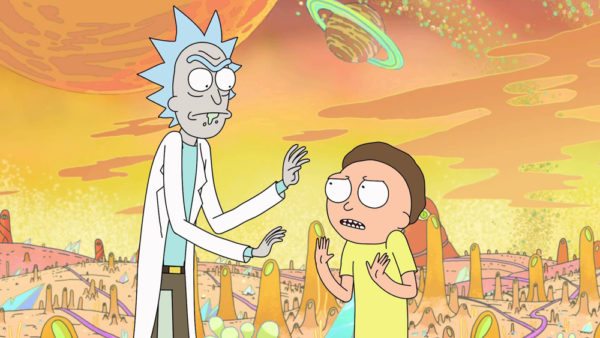 An infinite universe of possibilities

A hallmark of any good animated series is the expansive, anything-can-happen universe of infinite possibilities. Rick and Morty takes that concept and kicks it into twelfth gear. Rick and Morty work their way through space and time with a sense of reckless abandon. The show’s writers play with hefty scientific concepts and weave it into a familiar pop-culture inspired science fiction narrative in a way that feels both intelligent and relevant. The show takes a cue from Futurama being obsessively reverent to science and science fiction while working through all sorts of different genres. Predicting where the show will go next feels almost impossible. 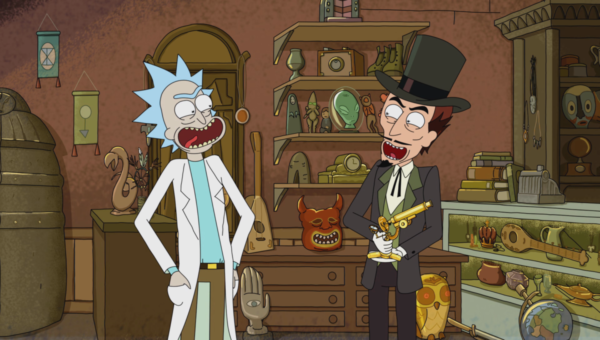 Just a peppering of Pop Culture

Animated shows are so often about satirizing and mirroring what’s happening in the world around us. A show like Family Guy couldn’t exist without cutaway gags and pop culture references. Rick and Morty use similar tactics, but never in a way that feels like the entire show is built upon them. You get references to things like Stephen King’s Needful Things or dropping a DMX track for a montage. But even when they’re working in straight up reference like the Purge-centric “Look Who’s Purging Now” the show never feels cheap. It never uses borrowed concepts as a crutch, but as inspiration for a new journey for its characters.

A version of this article was posted in July 2017.