Tom Jolliffe takes a look back at Amadeus which ruled all at the 1985 Oscars, and what happened to the director and leads… 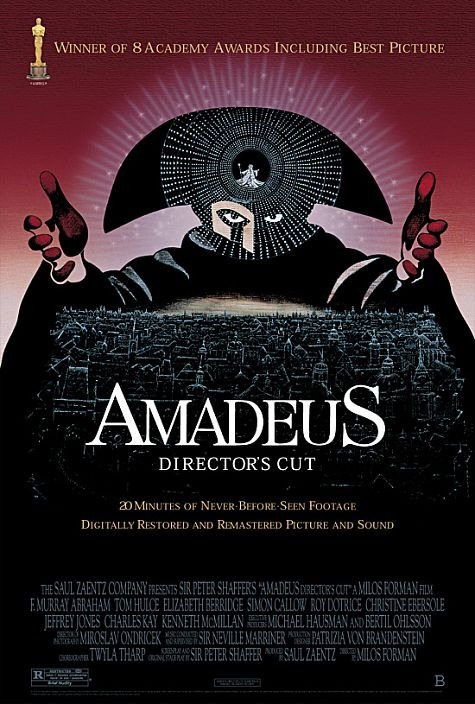 As we approach Oscar season and the buzz begins there will be all manner of guessing games as to who will receive those prized nominations and who will ultimately win. Much is expected of certain films and stars, and will there be an award sweeper? Time will tell.

What of historic Award vacuums? Well looking back 35 years, Amadeus was beginning its own run up to the following late winter Oscars ceremony. It was at the 1985 Awards that Milos Forman’s epic eschew on the history of Wolfgang Amadeus Mozart (based on Peter Shaffer’s stage play and adapted to screen by him too) reigned supreme. This fictionalised retelling of Mozart’s (Tom Hulce) rise and fall, as told through the fiercely jealous eyes of a rival composer, Salieri (F. Murray Abraham) is a work of sheer brilliance.

Forman, with previous in crafting masterpieces (including One Flew Over The Cuckoo’s Nest) delivered a work that astounded critics and which ultimately swept the boards at the Oscars. It won 8 awards, including Best picture, director, actor (Abraham) and more. Forman could never come close to hitting this level again. It was his peak. Sometimes a bar is set too high. The peak of post Amadeus work for Forman, who still retained the grip of an auteur craftsman, was The People vs Larry Flynt, two films and over a decade later. Perhaps he’d peaked at a point when the likes of Spielberg, Scorsese etc were rising and rising. In truth, Forman had also struggled to match his output of classic Czech cinema and more so Cuckoos Nest prior to Amadeus. Not that Ragtime, with 8 Oscar nominations could be considered anything less than excellent, but it wasn’t Cuckoo level (the curse of hitting masterpiece level, is everything else which isn’t quite). Hair was also an entertaining work and both those films foresaw a gift for implementing music on film that would bode exceptionally well for Amadeus.

Once Forman had crafted such impeccable, passionate cinema in Amadeus, something was given over that he could never quite repeat. So what works in Amadeus? Well…everything. The cinematography, set design, production design, costumes, every visual element is a masterclass. The music, not least consisting of an array of Mozart’s renowned works is exceptional, but just as exceptional is the placing within the film. This is a beautifully edited work, with wonderful usage (sometimes playful) of the music and the music and sound editing is unsurpassed before or since. To watch Amadeus is to feel a new found appreciation for music that is truly affecting. It cuts through you whether in relaying the joy of a piece of music, the hatred or the fear.

All of this audio and visual delight is further anchored by wonderful acting. A diverse supporting cast all play their part. The principal leads are wonderful. Elizabeth Berridge is fantastic. Impeccably costumed and nicely written, it’s a role that should have been a star maker for an actress more renowned for horror at that point. Looking angelic, younger than her years, but suitably complex when needed (and indeed strong), it’s a wonder she wasn’t destined for greater things in the following years. To this day her cult following is largely cosigned to her part here, and indeed for Funhouse (the enjoyable Tobe Hooper horror made several years previously). She didn’t have the movie starlet look of a Pfeiffer etc, but nonetheless a real natural beauty.

Tom Hulce received an Oscar nomination as ‘Wolfie.’ His background was more comedy than period epic (best known for Animal House prior to Amadeus). He never seemed to find that run of leading roles beyond Amadeus. The film, which called for Hulce to use his comedic talents (the film has some brilliant humour) and blend them with complex drama was a perfect vaulting point. Still, the follow up dramatic roles were never quite to par, and the comedic roles were largely consigned to support (in films like Parenthood). There were more intense, and rugged dramatic actors, and aspiring comedians were rife in the field.

One can’t mention Amadeus and not talk about F. Murray Abraham. He deservedly won the Oscar that year. It’s not just a performance of the year though. It’s up there with the all time legendary performances. His beautifully nuanced portrayal of a bitter, twisted, hateful, spiteful, cowardly and insidious Salieri is a masterclass in acting. All the while, as we hear Salieri recount his part in Mozart’s rise, fall and death, in his underhanded actions, we cannot help feel pity for the pitiful God fearing composer burning with jealousy at Mozart’s God given natural abilities and super stardom. Abraham is well aided by great scriptwriting and perfect editing, but his grasp of the role is awe inspiring.

So why did Abraham not go on to be as prolific as a leading light? He’s not talked of in the same breath as Pacino, Hoffman, De Niro, Nicholson etc. Prior to Amadeus he’d played a supporting foe to Pacino in Scarface (and Serpico). Beyond Amadeus he became a prolific character actor, but never the leading light again (or even often 2nd or 3rd billing, outside of low budget European films).  In more recent times, Abraham has become a reliable presence on some quality TV (Homeland, The Good Wife and more) as well as working with the Coens and Wes Anderson (in Inside Llewlyn Davis, Grand Budapest Hotel and Isle of Dogs). As prolific as he’s been, and reliable (particular as a solid scenery chewing villain), he seemed destined for more.

Who else seemed destined for greatness after Oscar success but didn’t catch the breaks they deserved? Let us know in the comments below or on twitter @flickeringmyth..