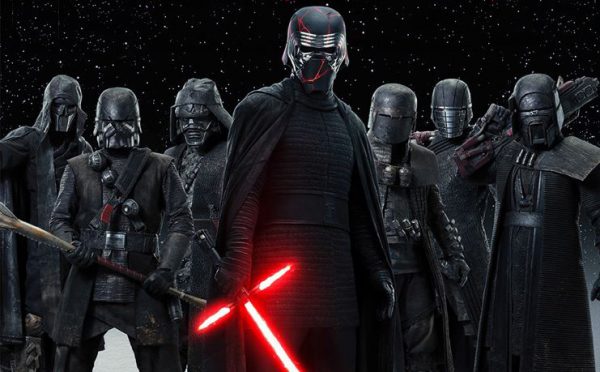 Having been glimpsed in the ‘forceback’ scene in Star Wars: The Force Awakens, the Knights of Ren made their return to the galaxy far, far away this month in Star Wars: The Rise of Skywalker, although their involvement was limited to a few shots of them standing around looking menacing, before being dispatched in short order by Ben Solo after his return to the Light.

While fans hoping to learn more about this mysterious group would have been left disappointed, the Star Wars: The Rise of Skywalker Visual Dictionary does offer up some insight, including the names and descriptions of the six members shown above (from left to right: Ap’lek, Ushar, Trudgen, Cardo, Vicrul and Kuruk). Check them out here…

Whereas most of the Knights prefer a straightforward — and violent — approach to eliminating their targets, Ap’lek revels in deception. As a strategist, he employs feints and misdirection to trap an opponent. On his belt is a smoke dispenser that obscures vision and disrupts sensors; his own nascent Force abilities allow him to peer through such screens. As a warrior, the sinister face of his battered helmet suggests an unsettling rictus, as he delights in his tricks. His preferred lethal weapon, though, is an ancient Mandalorian executioner’s ax.

Ushar is the Knight most likely to force prisoners to grovel for mercy. He tests the mettle of his victims; those who whimper for help are deserving of slow punishment, while those who fight back are to be lauded. Ushar’s helmet bears the crumple mark of a particularly feisty prisoner who retaliated. This desperate effort earned Ushar’s respect, and a swift death. Ushar’s signature weapon is a war club with a blunt, heavy end that helps drive kinetic energy to a concussion field generator. This feature can produce a widely dispersed concussion blast.

Trudgen is a collector of trophies from fallen conquests, Trudgen adds to his weapons and armor as his victories grow. His patchwork helmet indicates that he defeated a death trooper at some point in the past, a remarkable achievement given their strength and rarity. His signature weapon is an enormous vibrocleaver. The ultrasonic technology that rapidly vibrates the blade edge for extra cutting power is an add-on modification to a traditional, primitive weapon. When not swinging the hefty blade in combat, Trudgen either rests the blunt end over his shoulder, holds it via the weight-reducing holes lining the blade spine, or attaches bandolier straps to it and slings it over his back.

SEE ALSO: J.J. Abrams says Luke’s Star Wars: The Rise of Skywalker scene is not “flipping off” The Last Jedi

While most of the Knights of Ren strike with exacting precision, Cardo’s approach leaves wide swathes of destruction. His hefty arm cannon packs more than enough firepower for a single warrior. A wide-bore flamethrower launches jets of burning naphthex gel, burning down obstacles and any enemies using them as cover. A vented plasma bolt launcher has limited ammunition but fires explosive charges over 200 meters. Cardo’s obsession with weapon modification makes him the best armorer of the Knights. He also carries a compact, expedient blaster pistol.

Vicrul sees himself as the harvester, the reaper of the fallen, and the targeter of souls. Every unfortunate victim to fall to his weapons augments his power. The dark side, though it may be muted by his lack of Force-training, surges in him with each hateful strike. Vicrul relishes this, and prefers to eliminate his targets at close range, though he keeps a blaster pistol at the ready in case he should need it. Vicrul’s latent Force abilities manifest themselves in heightened reflexes and the power to magnify fear in his prey, though these abilities come unbidden and uncontrolled.

The most solitary of the Knights, Kuruk serves as the group’s rifleman and the pilot of the Night Buzzard. He is the one most likely to remain behind, perched on a high vantage point, covering an assault with his precision marksmanship. The blinder flaps on his helmet focus his attention on his target, and his aim is further sharpened by concentrating on the Force. He carries no bladed weaponry, relying instead on his multi-barreled custom-designed rifle, which has rapid-fire, sniping, and pump-action plasma bolt firing capabilities.

Did you want to see more of the Knights of Ren in Star Wars: The Rise of Skywalker? Let us know your thoughts in the comments or on our social channels @FlickeringMyth… 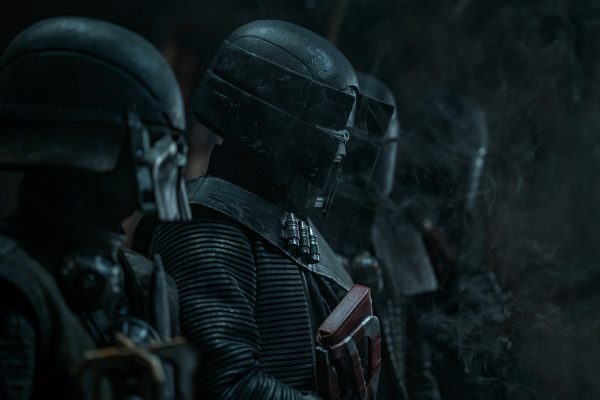