Hitcents and developer Ministry of Broadcast Studios have announced that they will be bringing fake news, murderous reality TV drama and a great big wall to gamers on Steam and Utomik on 30th January.  Inspired by classics such as Prince of Persia and Oddworld: Abe’s Exoddus, Ministry of Broadcast is a 2D platformer that will see players fight for their lives for the entertainment of the masses in a Orwellian regime’s reality TV show.  Enjoy the release date announcement trailer below… 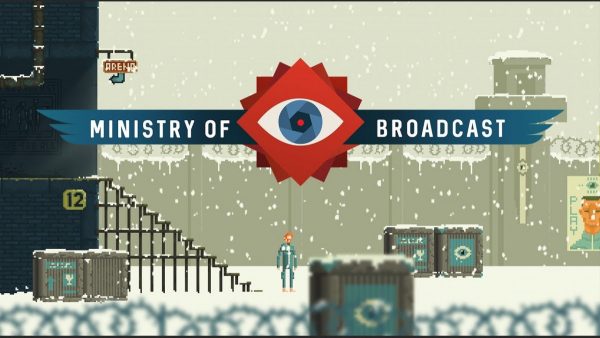 In Ministry of Broadcast a huge wall divides a country in two, it is this wall that also separates a man from his family and it is this man that players will take control of.  This wall also happens to be the focus of the barbaric reality TV show sponsored by the country’s Orwellian regime who promise freedom to anyone who can get over to the other side.  As players lead our hero on the path to reach family and freedom they will soon realise how the Regime and the show operate.

As popular culture has demonstrated time and again, Orwellian style regimes just don’t like to lose citizens to a life of freedom and players will encounter all manner of efforts to prevent his escape.  It will take skill and daring for players to avoid a variety of hazards, including dilapidated obstacles, leg-breaking drops, flaming barrels, spike pits and hanging steel beams are all there because the Regime don’t want you to escape.

Ministry of Broadcast will arrive on Utomik and Steam on 30th January with a 10% discount for the first week on Steam.  The game is also scheduled for release on the Nintendo Switch later this Spring.