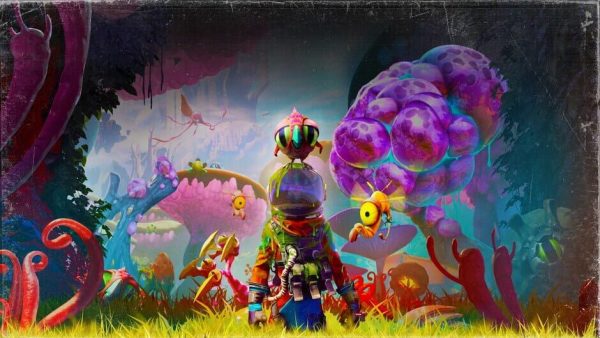 Typhoon Studios’ Journey to the Savage Planet is a charming exploration/adventure game where our character is sent by an Earth based interstellar travel company to explore possible habitable planets for humanity to relocate to. Players have to survey creatures and fauna, harvest resources and build upgrades to explore the strange and enigmatic planet on which we find ourselves stranded with bright flora, exotic plants and strange alien creatures.

The game’s opening explains that our character works for “Kindred Aerospace”, Earth’s fourth-ranked Aerospace provider. We are recruited as a scout to rate how habitable a planet is for Earth’s new dumping ground for humanity. The game starts with a rough landing and our character being given step by step details delivered to them on how to explore, harvest and manoeuvre around this alien world.

Once the player is outside the ship and begins to explore the surroundings, you discover of a monolithic tower on the planet, and your extremely eccentric boss communicates with you that getting inside this tower is your new main objective.

The planet boasts a number of different landscapes to explore, all of which are insanely pretty and fantastic to venture through. This is one game I would very much love to get my hands on an artbook for, as the designs are truly alien and breath-taking. 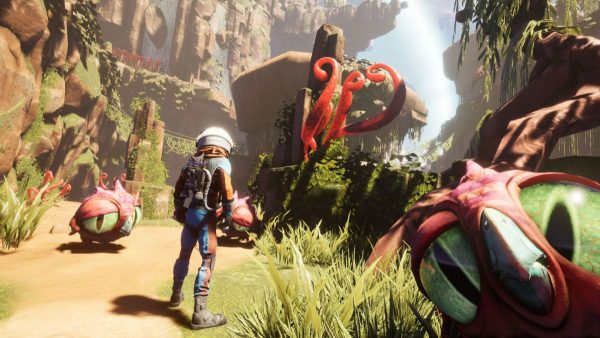 The game’s learning curve is not a massive, and it will give you plenty of time to explore and familiarise yourself with all upgrades before introducing new ones. This is one of the biggest mechanics of the game, exploration is locked behind character upgrades – jump packs, guns, environmental suit resistances and more. Journey to the Savage Planet is definitely a game that rewards us players who explore every single nook and cranny before progressing to the next area.

The game’s crafting requires new elements to be discovered and harvested, which creates its own separate waypoints on the player’s HUD. The issue with this is that many waypoints come in thick and fast allowing a slight feeling of being overwhelmed and not fully understanding what the actual primary objective is at that precise moment in time. This is an issue I felt early in the game where I was being confused by too many waypoints, then ended up running around in circles.

Exploration is Journey to the Savage Planet’s bread and butter; it is at the essence the lifeforce of this game. The landscapes within the game vary from area to area, but they do not impact that we in which you explore at all from what I played. The ice levels are just as easy to explore with no less friction on the players ability to cross the landscape.

The traversal of landscapes in the game gets increasingly more fun and challenging with each upgrade to the player. The simple jump gaps almost become quick time events (QTE) with the timing needed to propel yourself over massive expanses of nothingness; or simply fall into the expanse of oblivion. These traversal techniques are almost like puzzles themselves that put a smile on your face as they grow with complexity. 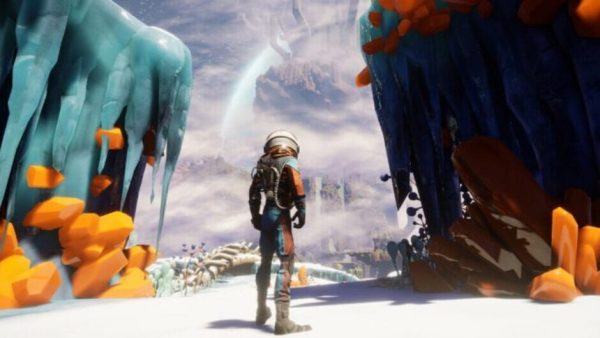 Throughout your adventures you will come across hostile creatures which will require an element of combat. Once you have crafted the gun you will have half the worry eliminated, the other half comes from the shooting mechanics. The game does not auto-lock onto the closest enemy, instead you have to be quick, precise and good with your aiming. The player can increase the accuracy by aiming down the barrel of the firearm, but this will certainly slow down your reactions.

The gun does not require players to find ammunition, instead the gun recharges after a certain number of shots. The gun can be upgraded to increase magazine size, charged shot, reloading time and a few other options. These are very much worth upgrading in the early stages of the game before the harder enemies appear that will force you to upgrade the weapon later.

Hostile and enemy creature in the game will be highlighted with a black arrow in screen, and the arrow will grow white with each passing moment the enemy registers you. When the arrow turns red this indicated the enemy is fully aware of you and is now hostile to our character.

This is a great mechanic and it has been implemented wonderfully in other titles many times now, but the biggest issue in this case is that the arrow does not work in a fully 3D environment. The indicator arrow will work in a circle roughly, if the arrow is pointing up then the enemy is right in front of you somewhere. I was looking up above me several times before I realised this flaw in the battle system. It was particularly infuriating in a boss fight a few hours into the game. 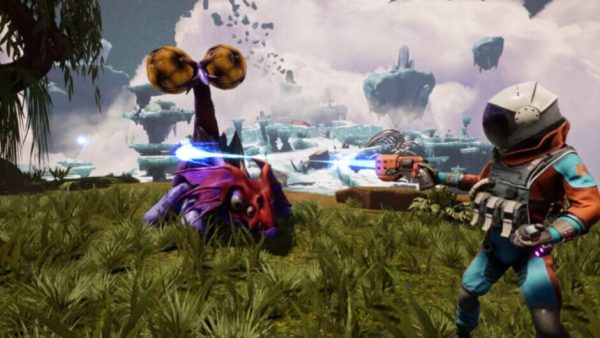 The music within this title is fantastic, there are some elements that remind me of the Borderlands games, with its mix of electronic music and country style banjo twangs. The soundtrack to the title does have an extremely strange sound that mimics the landscape of the game along with its overarching journey.

The style might be forgiven for looking like another Subnautica-type game; the story drives the exploration and expansion of your character. The fun comes from the entire experience of running, jumping, dying, retracing your steps to find your previous body’s loot and burying yourself. The game is weird, wacky, bizarre, and fantastic. 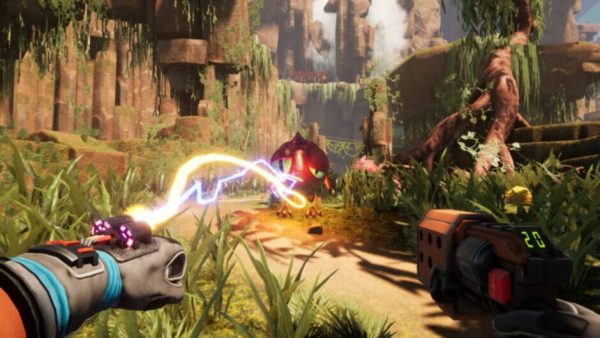