Games with Gold for March 2020 has been revealed and there’s a right mixed bag of gems coming to Xbox Live and Games Pass subscribers.  March may be rainy and glum but there’s fun to be had with Dark Knights, vampires, genies and ultra-fast blue hedgehogs. 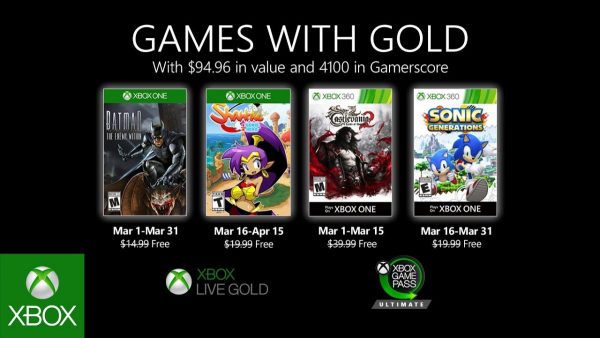 For the whole of March on Xbox One there’s some caped crusading to be carried out with Batman: The Enemy Within.  This sequel to Telltale’s 2016 Batman: The Telltale Series (Games with Gold for January) sees players once again taking control of Bruce Wayne/Batman (voiced by Troy baker).  There’s new trials in store for Batman as the Riddler returns to Gotham and gets up to more of his shenanigans, as well as shady goings on by a group known as the ‘Pact’, plus the arrival of the mysterious government organisation known as ‘The Agency’.

March 16th – 15th April brings Shantae: Half-Genie Hero to Xbox One.  In this 2D platform adventure, players take the role of Shantae, a half-genie, and jump through the levels using her hair to whip her enemies.  Players will be able to learn new dances that can be used to transform her into different animals that can allow her to get to otherwise inaccessible areas. By using her extra long hair and transformations only Shantae can save Sequin Land from the spate of crimes and her arch-nemesis, the pirate Risky Boots.

SEE ALSO: Here’s what the Xbox Series X will offer

For Xbox 360 owners (as well as backwards compatible on the Xbox One) the first half of March sees the return of Dracula in Castlevania: Lords of Shadow 2.  This installment in the hugely popular franchise sees Dracula awaken 1000 years after his last outing into a world he doesn’t know.  This open-world adventure will take players on a journey through medieval and modern times against enemies such as the Belmont Clan and a new deadlier threat.

Finally, Sonic Generations will take players on a time travelling journey that will see Sonic join up with some very familiar faces to take down his enemies and discover who was behind the evil time-altering scheme.