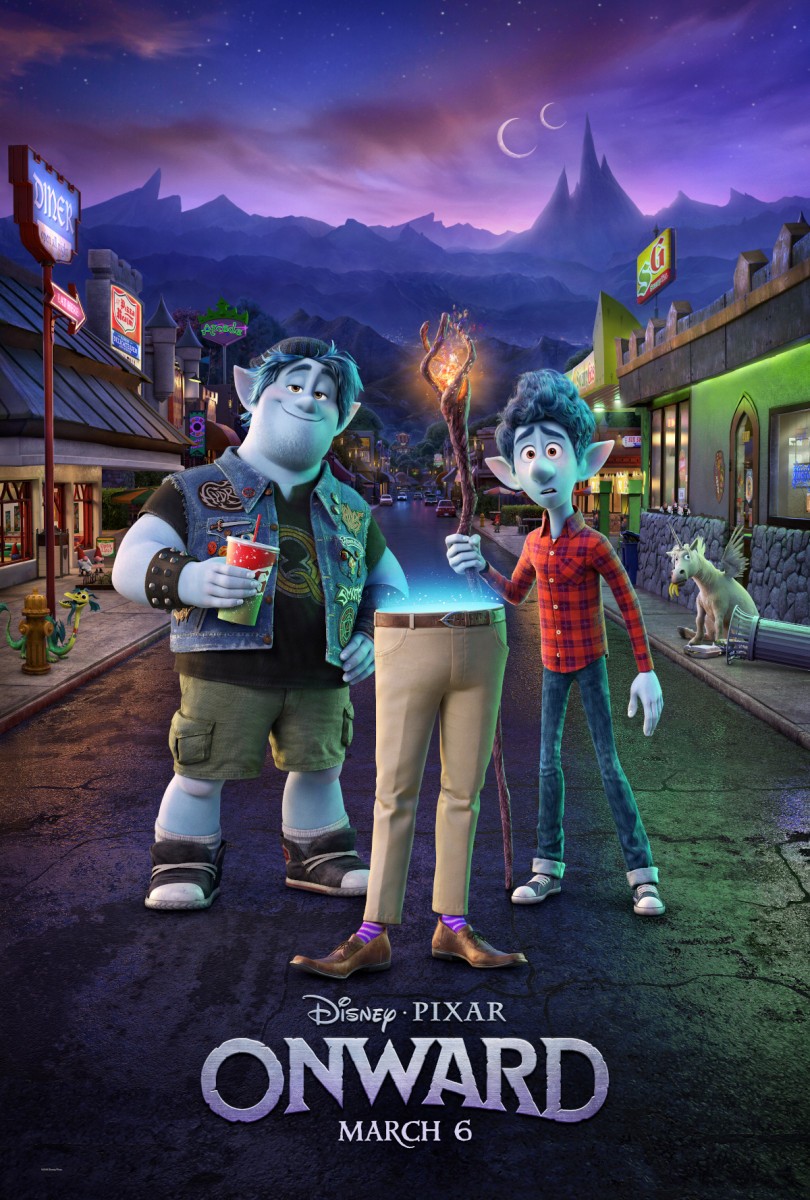 Set in a suburban fantasy world, two teenage elf brothers, Ian and Barley Lightfoot, go on a journey to discover if there’s still a little magic left out there in order to spend one last day with their father, who died when they were too young to remember him. Pixar is a brand so synonymous with quality animated entertainment that even “pretty good” tends to translate to “disappointing,” and such is certainly true of the studio’s first release this year, Onward (the other being Soul, due out this summer).

Pixar’s movie-to-masterpiece ratio is virtually unprecedented in Hollywood, and though their output has proven undeniably spotter in recent years – far away from the late ’00s streak of Ratatouille, WALL-E, Up, and Toy Story 3 – efforts like Inside Out, Incredibles 2, and Toy Story 4 have proven that a surging creativity still reigns supreme.

Like the very best Pixar films, a deeply personal thread winds its way through their latest; much like our elven protagonists Ian and Barley Lightfoot (Tom Holland and Chris Pratt), Onward‘s director and co-writer Dan Scanlon lost his father at a young age, and an early sequence where Ian listens to a recording of his late father’s voice is even directly inspired by an actual incident in Scanlon’s own life. The desire to know more about a departed loved one is what drives Onward‘s narrative, and while this suggests a film with a loud, beating heart, Scanlon’s journey towards an admittedly affecting finale proves bafflingly workmanlike at times.

On his 16th birthday, Ian is bequeathed a magical staff by his father, along with a spell which will allow him to bring his dad back to life for just 24 hours. After a conjuring mishap, however, Ian ends up reviving just the lower-half of his dad’s body – just his legs and feet – and so sets off on a road trip with Barley to find a magical gem which will allow them to complete the spell, with the clock already ticking.

Pixar has repeatedly proven themselves to be masters of reworking tired live-action genres within the animated realm – perhaps no better than the glorious prison break sequence in Toy Story 3 – so it’s a shame that Onward‘s magic-spiced road movie mostly amounts to a programmatic series of fetch quests. That might seem appropriate given the fantasy setting and Barley’s love of D&D-style adventure fare, but it sadly doesn’t feel much inspired. An early gas station encounter with a pixie biker gang, for example, is almost completely forgettable, and the only true detour of substance along the way is a pit-stop at an inviting-yet-soulless restaurant operated by a tamed manticore named Corey (Octavia Spencer), whose pathological deference to customer service is clearly suppressing her true savage nature.

Corey’s voiced with entertaining exuberance by Spencer, who steals a good number of the scenes she’s in – most opposite the brothers’ mother Laurel (Julia Louis-Dreyfus), as they both set out to track down her adventuring sons in the film’s equally formulaic B-plot.

As a piece of character fiction and a kooky road trip, Onward is certainly never less than fine, but what perhaps underwhelms more than anything is the excessively broad style of humour on offer, which misses almost as much as it hits, and rarely results in the belly-laughs Pixar fans are trained to expect. It’s neither clever in its wit nor inspired in its physical comedy – the whole Weekend at Bernie’s shtick feels oddly flavourless, even tacked on – while Holland and Pratt, for all their solid efforts, are more-or-less thinly-veiled approximations of their beloved MCU counterparts. Pixar has a habit of tactfully wringing emotion out of subjects as complex and thoughtful as growing up, mortality, and how humans deal with negative emotions. And so, Onward‘s opening passages seem to disappointingly suggest a central thematic focused on transparently indicting modern conveniences; a paean to the magic missing from mile-a-minute living. Initially, it puts Scanlon and co-writers Jason Headley and Keith Bunin at risk of seeming like Luddites.

Thankfully it’s really more a cheeky fringe commentary than part of the film’s prevailing message, which is pointed instead towards the brotherly bond between Ian and Barley. It might seem decidedly less adventurous, even quaint, compared to the thorny existentialism of the Toy Story movies and Inside Out in particular, yet it nevertheless hits the right emotional notes in its modestly executed climax.

Demonstrating tasteful restraint at the culmination of the boys’ journey, Pixar respectably skirts away from piling on the maudlin sentiment and instead opts for a surprisingly pared down finale that’s all the better as a result. Given how utterly obsessed contemporary tentpole fare is with hopelessly clinging to the past – and there are no worse offenders than Disney, in fact – it’s refreshing that Onward begs audiences to consider the present they’re so lucky to have.

Looking back at Pixar’s incredible pantheon of almost two-dozen films, it’s impossible to view Onward as anything more than a bottom-five pick – though it’s certainly not another Cars 2. It ticks enough boxes and is artistically appealing enough to be an entirely respectable effort in its own right, but rather ironically lacks the magic its characters are so desperately pursuing.

Those craving the studio’s signature eye-popping visuals will still find plenty to savour here, even if the overarching fantasy aesthetic is relatively generic and the elf design honestly quite unappealing. Yet it’s melded with our recognisable contemporary world – the cars, the highways, the restaurants – in a way that’s nothing if not playfully creative.

Again, expectations are unfortunate if unavoidable when we’re talking about a company as consistently impressive as Pixar, because on its own terms Onward does entertain, even if it doesn’t manage to engage the brain and tickle the funny bone as often as you’ll likely hope.

A disappointingly pedestrian effort from Pixar, yet certainly never less than broadly amusing.