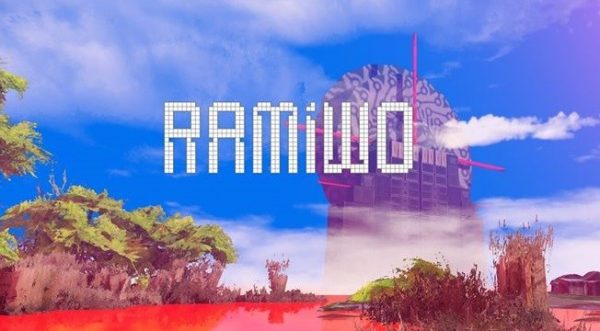 Playing Ramiwo, I was unfortunately reminded of another indie title called Virginia. Like Ramiwo, it marketed itself as a walking simulator with a deep narrative, but the end result was more akin to an overly-ambitious animated film that ultimately failed thematically and artistically.

Developed by Matto and Bil Deerberg (I am unaware if the latter is also the name of his company) and published by Deerberg himself, Ramiwo offers slightly more gameplay freedom than Virginia (and certainly angered me a whole lot less), but the fact that I was so blatantly made aware of the latter isn’t a good sign. Ramiwo advertises itself as being an exploration game providing “sweetmeat” for one’s brain, but you’ll find that both aspects are significantly limited, consequently making the game a hard sell. That’s the short answer- if you want the longer one read on. 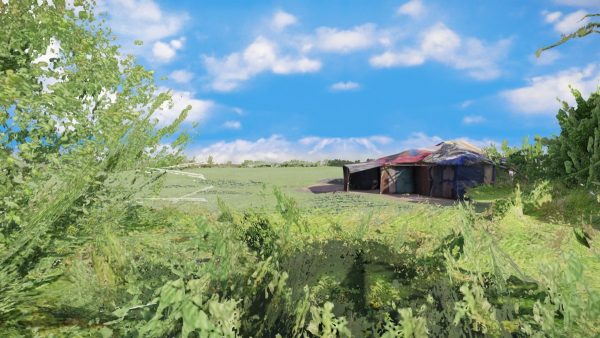 Beginning with the story, I can quickly say that there isn’t one. You play as a floating cube that has no characteristics to it. Maybe Deerberg intended for there to be a subtler tale told by the background sounds and imagery in front of you, but if there was I couldn’t discern it.

That imagery makes-up the many settings. Ramiwo is an interesting game in that it takes place on a cube-shaped planet divided into 96 different worlds (16 on each side, 6 sides total). I say interesting because the idea of traveling through differing environments to get to an end-goal is the perfect excuse to engage in a visual orgy, and Deerberg does exactly that. While each face of the “dice” features a specific motif for the mini areas to follow (industrial, jungle, water, etc…), the regions themselves are uniquely crafted on an individual basis. You’ll see awkward geometry resembling the labyrinthine descriptions in a Lovecraft novel; matter and masses moving in crazily, yet distinctly controlled, manners; wetlands rife with strange plants and totems, and urbicidal scapes taken from some post-apocalyptic future amongst many others. In particular, I liked the luminescent tints some places had based on the way that particular land’s sun shined (ranging from common yellow to even purple!). 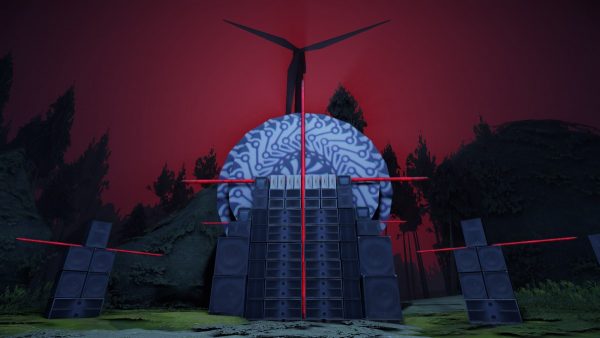 Deerberg’s imagination is on point, and made me wonder if he was influenced at all by Italo Calvino’s Invisible Cities, which was about a series of different burghal environments as described by an objective viewer.

Unfortunately, all that creativity is hampered by the bizarre art style in front of you. It’s as though Deerberg was going for photorealistic graphics, realized halfway through he wouldn’t have the money to fully render his vision, quickly downgraded it to try and resemble Minecraft, only to realize he didn’t have the budget for THAT either, and then started changing it back to his original intent only to give up halfway through. What I mean by that is, while environmental pieces don’t look cartoony, they lack good texturing, making them resemble the out-of-place polygon models from the PS2 era. If it was always his wish be abstract, I just don’t see the effort because every solid in Ramiwo strikes me as though it was taken from some pre-designed model in an old game engine and haphazardly put into the game without much craftsmanship. 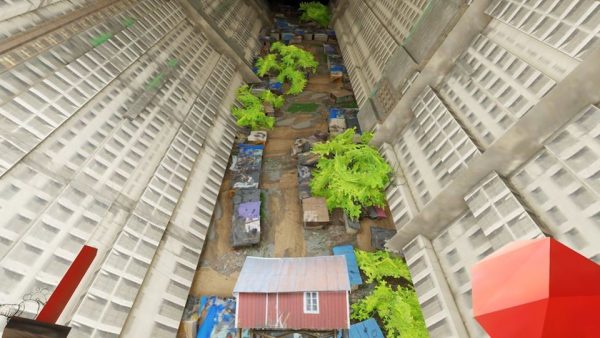 Making things worse are a couple of graphical hitches. First, I noticed some texture pop-in during times when I would walk through one place or another. Secondly, and most unforgivably, is that the game isn’t optimized well. Every minute or even half-minute the screen will go white or grey for a few seconds before returning back to normal. It got really bothersome, especially for a title that rests its appeal on the visuals in front of you.

Sound is another disappointing category. There is no voice acting, and the music is literally just a single stringed instrument playing some solo piece on repeat. Occasionally it’s altered by the respective world you’re in, but, for the most part, it stays constant. It is peaceful sounding (which is the perfect accompaniment to a walking sim), and the musician behind it is clearly talented, but considering how wacky some of these locales could be, I felt the lack of diverse melodies was a missed opportunity. 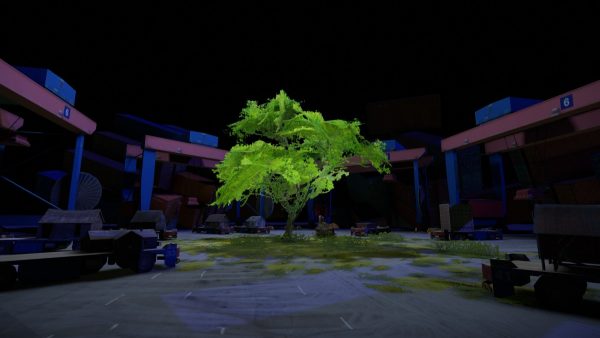 The worst part is the SFX. I don’t know what Deerberg’s aim was here, but if it was to be insipidly surreal he nailed it. You’ll hear a variety of the most random noises you can possibly think of, including: pencil scratching, saw cutting, bubble spattering, weird buzzing, and even a baby cooing amongst a plethora of others. Sometimes they make sense by fitting the terrain you’re in, like the sound of a waterfall when near a body of moving water or a pig snorting when you’re on a farm, but for the most part it’s so desultory, as though it was thrown in at the last minute.

The game design itself has flaws too. As a walking simulator, the point of Ramiwo should be to successfully drift through all the adjacent worlds, with said worlds being fun to explore- if you’re going to limit someone’s gameplay to just wandering around a free roam map, you have to give them the ability to do so without (unreasonable) restraint. Given the concept of almost 100 planes to visit, you’d think Ramiwo would fit the bill. 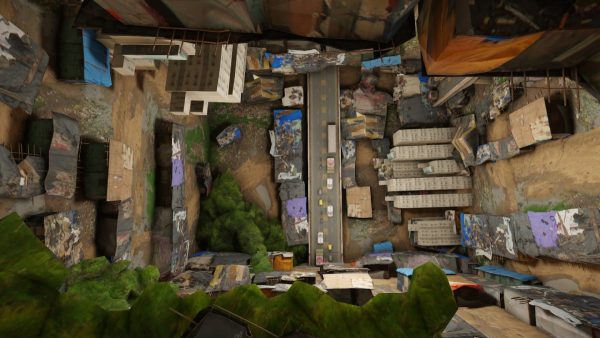 Each place you enter has four entry points that connect it with the other squares in its vicinity, these “portals” (if you will) marked by graffiti etchings that aesthetically resemble the drawings from Antichamber (on a side note, a stenciled art style would have been perfect for this title). The problem is the space you’re given to amble between these entryways is so small, you’re really not able to appreciate the geography. Want to take a closer look at that monolith in front of you? How about those polychromatic flora on the other side? Nope, take one step too far and you’re teleported to another venue. And considering you’re not given a visible boundary line indicating the warp zone of these beaming glyphs, you’ll find this will happen to you very frequently. Why Deerberg didn’t think to expand the area for player examination when he put a lot of time into conceiving these intricate, colorful designs makes no sense (unless he didn’t want gamers to notice the poor texturing most of these surfaces have).

So ultimately, Ramiwo was a big missed opportunity. Deerberg could’ve given us an arthouse version of a Rick and Morty episode- a relaxing journey through a series of demiurgic dimensions, but instead we got a poor man’s video game adaptation of Sliders. To add the cherry on top, you can’t even pause- pressing the escape button hits you with a “game over,” meaning you have to beat it one sitting. 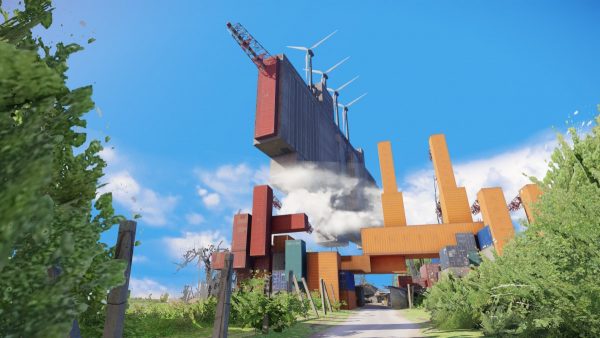 But it’s not like it’ll take you long. I completed Ramiwo in about 1.5 hours, and at a $5.00 asking price, that doesn’t qualify it per my $1 : 30 minutes of gameplay ratio. I wish I could say that the kaleidoscopic excursion is worth it, but with restricted movement, an annoying flash bug, and half-baked graphic design, it isn’t. If you really want to kill one and half hours on an acid trip with this, get it on a sale.