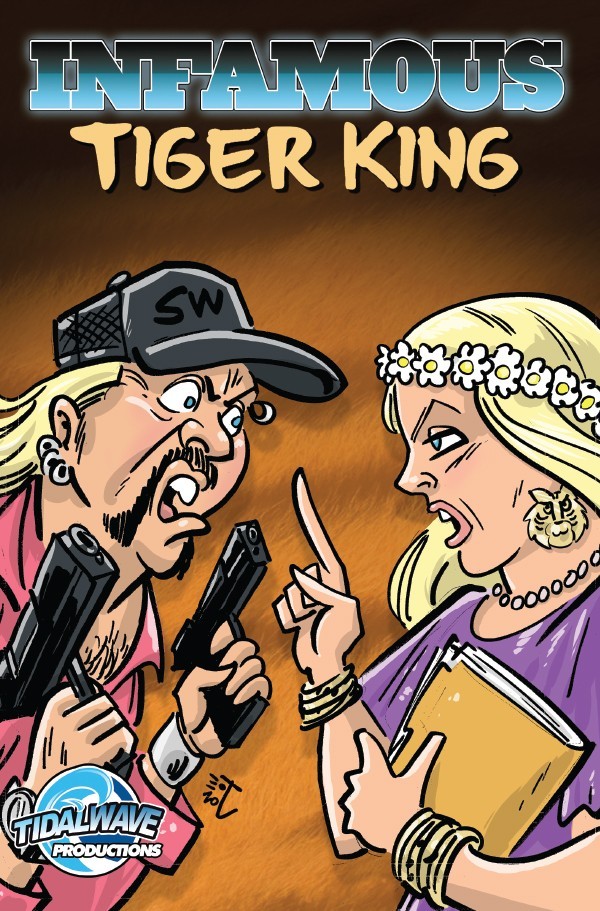 Infamous Tiger King is a comic book adaptation of the story of Joseph Maldonado-Passage, the former proprietor of the GW Zoo and Exotic Animal Park in Oklahoma who was the subject of the Netflix series Tiger King: Murder, Mayhem and Madness. The comic is produced by Tidalwave Productions, and is written by Michael Frizell with art by Joe Paradise, colors by Pablo Martinena, and letters by Ben Gilbert.

The one-shot chronicles the early lives of Maldonado-Passage and his archrival, Carole Baskin, who are both extensively profiled in the Netflix series. It discusses Maldonado-Passage growing up as a young gay man in the extremely conservative area of North Texas and Oklahoma, and Baskin’s chaotic upbringing and love-life. It tackles bullying, harassment, abuse, and unhealthy dynamics with friends and family, although conclusions are not drawn from any of this.

The comic is made for adults, and contains representations of actions and ideas that are inappropriate for a younger audience, such as graphic violence, animal cruelty, and sexual relations. Strangely enough, though, the comic can’t seem to decide what kind of language it will permit, and what kind of language it will censor. Extremely derogatory language for homosexuals is considered permitted, whereas common swearwords are not.

The art of the comic vacillates between the primitive and roughly MAD magazine level. The writing is somewhat disjointed, and does not always drive completely with the images represented. More than once, it is difficult to determine what the dialogue means, who said it, and to what it is referring. The comic is definitely correct in that both Maldonado-Passage and Baskin are infamous. It appears to represent both from multiple perspectives: in a good light, and in a bad light. This would seem to be an attempt to give a well-rounded dimension to the story and the characters.

The comic is not without its own controversy, however. Certain information  and support has been provided by PETA, or the People for the Ethical Treatment of Animals, an organization notorious for its tactics. PETA definitely has its own agenda to push with this story. One can infer what they wish from PETA’s association with the comic.

Infamous Tiger King seems to be a largely ham-fisted attempt to tell a story that has already been told a million times, by TV shows, podcasts, news outlets, and court documents. The real question is as to why this comic is being produced in the first place, when everybody already knows everything about it. The only conclusion that may be drawn is that perhaps the backers, yes, that is PETA, have a story that they want told for the public record, and wish to put it in this mildly entertaining form.