Anghus Houvouras on why he kind of loves Batman Forever… 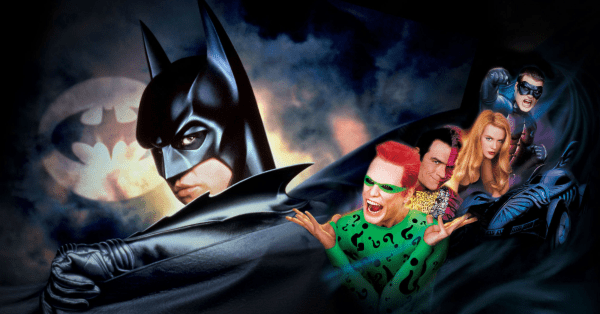 It was 25 years ago that the third modern Batman movie was released. An uncertain time for the character who just six years earlier had revolutionized the modern blockbuster, helped launch the modern age of comic book adaptations, and made an untold millions for Warner Bros. The follow-up, Batman Returns, was seen as a disappointment by the studio who felt the series had taken a dark turn and lost much of its mainstream appeal.

The third installment would be a departure both for Michael Keaton and Tim Burton who left the franchise in the hands of Joel Schumacher. Joel Schumacher… who would one day brutally murder the franchise with reckless abandon and shelve the Dark Knight for nearly a decade before Christopher Nolan found a way to make him interesting (and profitable) again. We all know that Batman & Robin is a pox on pop culture that deserves no defense. But Batman Forever… well, I hate to admit this…

I kind of love Batman Forever. I know. I know. It’s silly. It takes some great characters and reduces them to one-dimensional, cartoonish caricatures. It gets so much more wrong than it does right. It exhibits all of the symptoms of the garish disease that would eventually critically wound the franchise, and yet I still enjoy the movie some 25 screenings later (four of them theatrically when it first released in 1995).

Loving Batman Forever is like loving Alien 3 (which I do): You are reluctant to admit it publicly knowing that you will be torn down by your peers and have your taste questioned by the vast majority of film fans. When people are discussing their favorite comic book adaptations, bringing up Batman Forever is like farting in an elevator. You can only watch the film in the privacy of your own home, with headphones on, quickly ALT/TAB-ing to another screen when loved ones come by. And I do. I love Val Kilmer as Bruce Wayne. I love the simple, stupid plot. Jim Carrey as a Riddler desperately in need of Ritalin. Nicole Kidman vamping it up sex-kitten style. Chris O’Donnell was a great first (and only) attempt at a big screen Robin. And even Tommy Lee Jones….

…well Tommy Lee Jones was absolutely dreadful as Two-Face. Like, legendarily terrible. But still, even seeing a great actor like Tommy lee Jones pushed well beyond his comfort zone into something awful is kind of entertaining.

Yes, the plot is terrible and a poor excuse to watch good actors chew on scenery. And yet, I still love it. So many scenes that put a smile on my face. When Batman goes to Chase Meridian for a late night make out session. Batman and she tells him she can’t go through with it because she has feeling for Bruce Wayne. Val Kilmer shamelessly mugs before turning to the camera and smiling. Batman is smiling. It’s ridiculous, and a complete abandonment of the stoicism associated with the character. And still I love it. 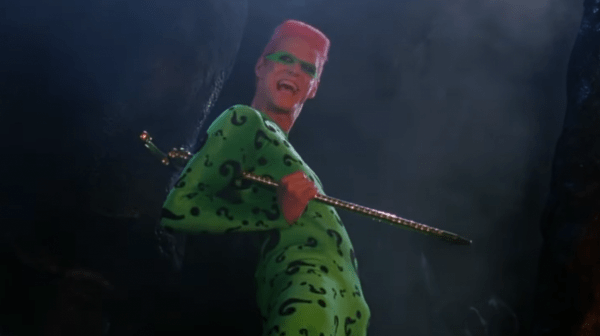 I even love the soundtrack, chock full of interesting B-sides from artists like U2 and The Flaming Lips. I even love Seal’s “Kiss from a Rose”. I’m literally singing it at the top of my lungs as I write this piece.

I love Batman Forever, warts and all. It took me 20 years to say that out loud, but it needed to be said.

How do you feel about Batman Forever?

Anghus Houvouras is a North Carolina based writer and filmmaker.