The update for Season Four of Call of Duty: Modern Warfare (including Warzone) is now available and features a change to the battle in Verdansk as well as a new multiplayer map, mode and a new Warzone Starter Pack.  See more of this pack in the video below… 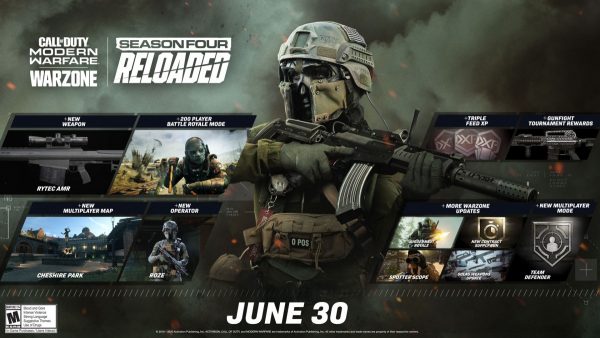 The Armistice alliance between Allegiance and Coalition forces is on the brink of collapse and threatens complete chaos across Verdansk.  With this update Verdansk will now be able to hold up to 200 players in Battle Royale Quads.  This means huge exciting battles with 50 Quads of Operators fighting each other in an ever decreasing circle.

There are new Supply Run Contracts to find in-match that when activated will send players and their squad to a nearby Buy Station. Reach it within the time limit to get a discount on Buy Station purchases.

A new Spotter Scope can be found around Verdansk.  This new item is a re-usable scope that allows players to scan the environment and mark enemies without being detected making it a great tool for Operators.

The powerful .50 calibre Rytec AMR sniper rifle is available to unlock via in-game challenge and a blueprint variant is also available to get through the Store.  This rifle is deadliest semi-automatic anti-material rifles in the game.

The new Cheshire Park Multiplayer Map makes its introduction and is set in urban London in a picturesque garden and conservatory with townhomes and a central flora-filled area​.

There’s also the return of the Team Defender multiplayer mode that puts a twist on the traditional Capture the Flag.  Rather than both teams defending their flags, a player on each team must hold their flag. Points are scored for every second that a member keeps hold of their team’s flag and attackers will need to target that flag carrier to stop the scoring of vital points.

Finally, players can pick up the Warzone Starter Pack for a very small price and will provide a boost to loadouts, Operator collection, and XP earn rate.  This pack includes:

The Warzone Starter Pack and the latest update are available now.