The cinematic future of the Star Trek franchise remains very much in flux at present; since the disappointing box office performance of 2016’s Star Trek Beyond, Paramount has continually stalled production of a direct follow-up, with the latest incarnation of the next movie – from TV maestro Noah Hawley (Fargo, Legion) – said to be on hold as the studio reassesses the franchise.

As fans anxiously wait for news on the big screen future of the series, what better time to revisit Trek’s storied history over the last four decades than today, September 8th – a.k.a. Star Trek Day – the anniversary of the premiere of the original Star Trek series some 54 years ago on September 8th 1966.

While there’s no denying the massive inconsistency across the thirteen Trek movies to date, they have nevertheless blessed fans with a major scaling-up of the scope possible on their televised forebears, no matter how they ultimately turned out. Having recently binged the series’ entire cinematic back catalogue, this is an impossibly subjective rundown of Star Trek on the big screen – from very worst to very best.

And we begin, inevitably, with what’s generally accepted to be the worst of the lot – if perhaps not quite as terrible as many insist… 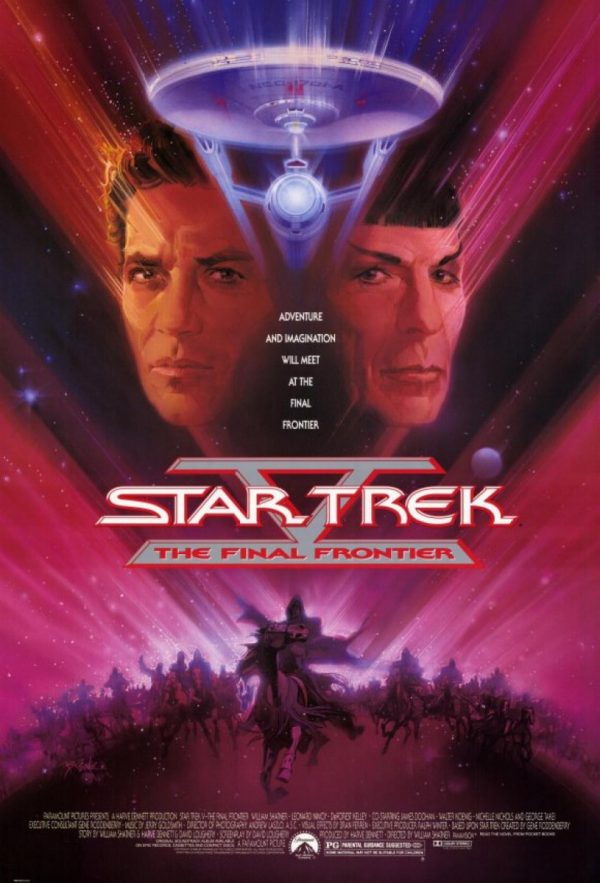 After Leonard Nimoy was afforded the opportunity to helm the third and fourth Trek movies, William Shatner stepped up for his contractually stipulated (!) stint in the director’s chair, which is near-universally accepted to be the worst entry in the series. Plagued by setbacks from pre-production through to release – including a Writers Guild strike and disastrous test screenings – The Final Frontier isn’t quite the unwatchable one-star mess some die-hards might insist it to be, but still a bland misfire for sure.

The warnings signs are there from a tedious opening sequence in which Kirk free climbs El Capitan, punctuated by Spock (Leonard Nimoy) rescuing him from a fall using levitation boots – with shambolically awful green screen in the bargain. It sets the mood for a film that, tonally and otherwise, just doesn’t work. What passes for humour here is largely terrible, especially an embarrassing detour into flat-out slapstick as Scotty (James Doohan) knocks himself out in a hallway.

At least the polarising fourth film committed passionately to its ridiculous premise, but here the Enterprise crew grappling with the possible existence of God just feels totally half-baked. Some distinctly weird moments like Uhura (Nichelle Nichols) dancing in the nude in order to distract some locals and Spock using the Vulcan nerve pinch on a horse are likely to leave audiences unsure whether to laugh or place their head in their hands.

There’s a single truly remarkable scene in the entire film, and that’s the campfire hangout between Kirk, Bones (DeForest Kelley), and Spock. It’s sensibly dislocated from the questionable central narrative and ends up one of only a few honest character exchanges throughout the mercifully brief 106-minute runtime. 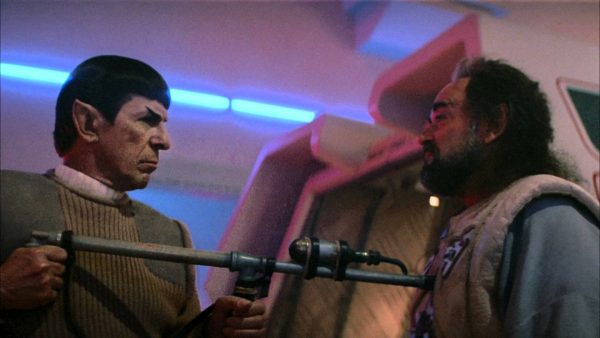 The cast, to their credit, make an admirable effort to elevate the material; for one, DeForest Kelley acts the hell out of Bones’ flashback to euthanising his father. There’s also a cracking supporting cast in the fray here, led by Laurence Luckinbill as the villainous Sybok, an antagonist lent greater interest by not only Luckinbill’s sinewy performance, but also the character’s more pared down, less-cartoonish tenor compared to prior Trek baddies.

In the action stakes, it’s sadly helmed by Shatner to be as beige and programmatic as possible; the series’ set-pieces have never felt quite this workmanlike. Shatner’s direction also bungles several key dramatic moments, especially the revelation that Sybok is Spock’s half-brother, a bombshell which lands with nary a whimper.

The notion of Kirk confronting God presents an intriguing hook for the film’s third act, albeit a shamelessly silly one, cemented by Bones’ hysterical one-liner to Kirk, “You don’t
ask the Almighty for an ID.” Sadly the genuine dramatic promise of Kirk’s quest is undermined by both the unsatisfying scripted resolution and generally unremarkable visual presentation of the journey itself.

Without question the most pedestrian of all the Trek movies, The Final Frontier is a watchable yet frustratingly wrong-footed, forgettable effort.