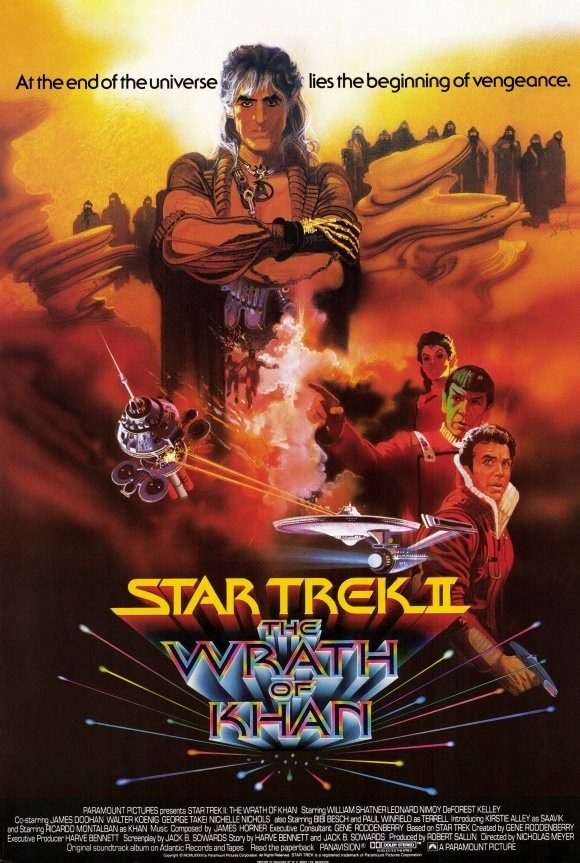 By far the most acclaimed Star Trek movie not called Galaxy Quest, the series’ second effort The Wrath of Khan improved upon The Motion Picture in practically every way; writing, direction, cinematography, pacing, and tone are all effortlessly superior, on a budget less than one-third of its predecessor, no less.

A more crowd-pleasing riposte to the ambitious yet divisive original, the second Trek movie is a less-serious, more wryly witty space opera packed with deliciously entertaining dialogue and, yes, the all-timer villain that is Ricardo Montalbán’s ineffable Khan Noonien Singh.

The iconic moments are myriad; the Kobayashi Maru, Kirk’s birthday, the arrival of Carol Marcus (Bibi Besch), and of course Spock’s death – so much of which was clumsily co-opted into Star Trek Into Darkness three decades later.

Yet these moments wouldn’t quite be what they are without perhaps the most electrifying group performance of the legendary ensemble; Shatner’s more worn-down, world-weary Kirk is a joy to behold as he ventures to regain his vitality, and his dynamic with Bones throughout proves especially enjoyable. Kirstie Alley meanwhile brings a fresh energy to proceedings as Spock’s protege Saavik, even if the unmistakable standout performance is that of Montalbán as the vengeful superhuman Khan. While it’s less of an outright visual feast than its predecessor, the superior storytelling and character work effortlessly compensate, and a vibrant, playful musical score from James Horner certainly doesn’t hurt either.

But above all this, The Wrath of Khan is girded at all times by the steady directorial hand of the fantastic Nicholas Meyer, who brings a fluid dynamism to the picture free of Gene Roddenberry’s famous micro-management (Roddenberry was kicked out of the sequel’s production). Better still, he pulls it off within a compact two hours.

Even the film’s occasionally objectionable elements hardly irritate; the hurried arrival of Kirk’s son David is both unnecessary and entirely underdeveloped, yet its flirtations with soap opera nonsense are never over-egged enough to truly drag the film down.

Easily the most tonally buoyant and emotionally striking Trek film, The Wrath of Khan immediately became the standard-bearer by which all other entries would be judged. Naturally, few have gotten close to matching it.

How would you rank the Star Trek movies? Let us know in the comments or on social media @flickeringmyth…