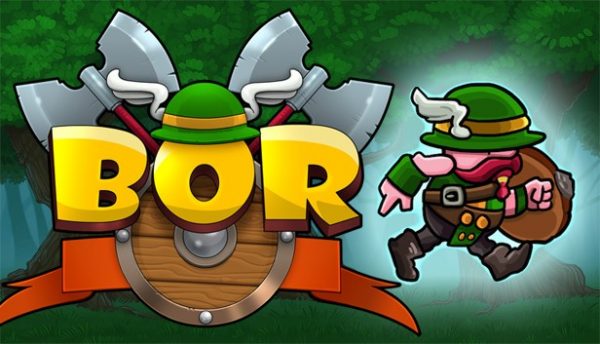 There’s not much to say about the platforming genre that hasn’t already been said. It’s a simple concept that opens itself up to a myriad of design features limited only by the imagination of its creators.

Bor is the latest in a string of like-minded releases from the indie market. Developed and published by Dracoders, Bor has you play as an (Irish?) viking who must travel to four different worlds looking for his kidnapped wives. The question is does it offer anything game changing in the realm of platforming mechanics? The short answer is no, but it’s still very enjoyable. For the long answer, read on!

I basically covered the story with that sentence recap. Jump ‘n’ runs tend to not have extravagant narratives because of their focus on gameplay, which means I’m going to move onto the graphics.

You know, I’m not going to lie- when I first saw Bor, I couldn’t help but think “crude” and “cheap”. But then again, I had the exact same reaction when I was first recommended Rick and Morty. Dracoders uses a stereotypical viking schema to explore a fantasy-esque world full of odd-looking renditions of classic monsters like dragons, golems, and yetis. Every critter and person has bold outlines that seem like they were etched by hand rather than through a digital pen. As a result, there’s a literal roughness to their shapes that leaves them looking uneven at times. 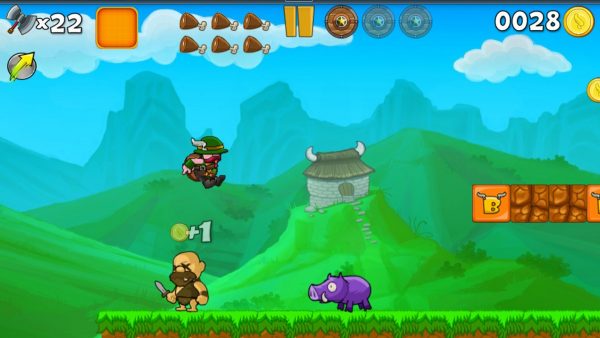 Luckily, it’s all consistent and filled in with great, vibrant colors. Every figure and landscape is coated with bright hues that makes them resonate with life. Combine these two aspects and you admittedly get a charm that only grows the more you play. From the art direction alone, I can tell this is a game that had a lot of love put into it- in many ways, it feels like a throwback to the original Mario Bros. which also coasted on vivid shades that stood out in spite of the drab tint overlaying it.

The four environments you traverse through (Highlands, Snowlands, Forest, Castle) are distinct enough from a palette perspective- you don’t just get reskinned grounds, but different areas with differing functions. The Highlands feature grassy square knolls while the Snowlands have frozen blocks that liquefy if you stand on them too long; the Forest holds a poisonous swamp that damages you, while the Castle boasts rivers of lava that instantly incinerate you. While more could have been done, I acknowledge that just enough changes are implemented that you don’t feel like you’re reentering the same place again and again.

If there is one complaint I have about the graphics, it’s that the same background is reused for every level in the respective worlds, meaning you only get four variants for the duration of the title (excluding the secret levels, which include a cave canvas that is also utilized multiple times without adjustment). 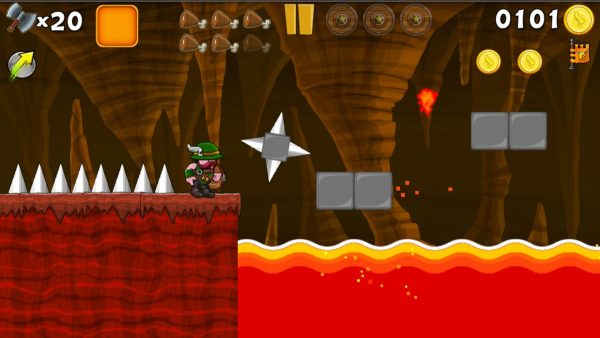 From there, we move onto sound: there is no voice acting, outside of some grunts Bor makes, which means we’ll begin with the SFX. Here, Bor was a little too retro, and what I mean by that is this- older platformers from back in the day didn’t have much in the way of sound variety: it was the same noise keyed to the same action, no matter what you did, and that’s the case here. You have specific beats created for specific things, like the throwing of Bor’s axe or collecting a coin or jumping on an enemy, but it rarely if ever alternates. You could be falling fast and still hear the same exact note for getting a token as you would if you just grabbed it normally; a rock creature makes the same grunt as a bat when struck, either with boots or a hatchet.

There’s also the fact that some movements like footsteps and melting ice don’t even have SFX, but at least everything is well-mixed against the music, which is solid but very sparse. The four realms Bor has to travel through have maybe two tracks each, and that’s a big issue because it means you’re essentially listening to an unchanging melody no matter the adjustments in the level’s conditions. For example, hearing the same track play for a level where you’re being chased by a runaway boulder versus one where you’re slowly maneuvering your way past blocks is strange. Again, the score itself is pleasant and general enough that it isn’t distracting, but given the diversity in activities, I do feel it was a missed opportunity.

And that brings us to gameplay. Bor is self-described as an “old-school platform[er],” and if you have had any experience or memories with those kinds of games, you’ll notice the influence right away: I personally caught references to Super Mario Bros., Yoshi’s Island, and even the Donkey Kong Country series, and I’m sure I missed more! 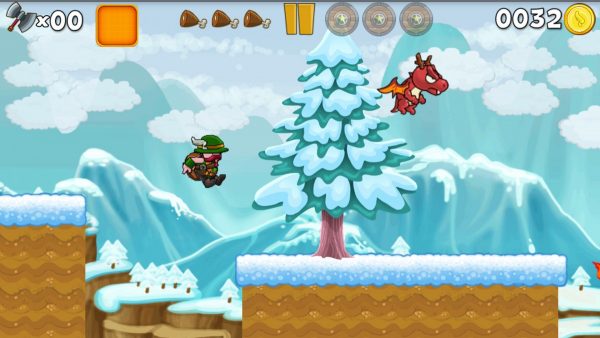 The problem is Bor doesn’t do much in the way of spicing things up. To clarify, the levels themselves are distinct- though they are all primarily sidescrolling in nature, enemy/obstacle patterns and placements ensure no two areas play the same.

No, what I mean by spice is that you get a very bare-bones platformer. Bor is all about timed jumps, both for attacking and navigating, with the occasional ax fling thrown in for good measure. The few variables it tosses into the mix are not only taken from prior (and more exciting) games of the same genre, but also so sparse as to be a rare find. For instance, there’s an invincibility shield, but I’ll be danged if I found maybe three in my entire playthrough. There’s a p-switch that temporarily reveals hidden details, but it’s few and far between, and usually very obvious in location.

Because Bor doesn’t have lives, coins are instead used for a secondary function that simultaneously serves as an interesting design choice from Dracoders- the ability to pay, at certain sign posts, for some change to happen in the level. Whether this is adding more platforms or disclosing a secret location/item, it was all interesting and something I thought had a lot of untapped potential- suppose you were given multiple options instead of just one? Imagine the replay value that would come from being able to drastically fluctuate certain parts of certain levels. Alas, here it’s pretty straightforward and, once again, too scattered to be considered a substantial part of the game. 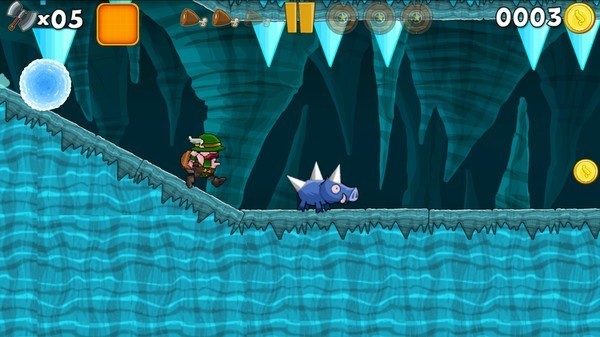 Now, while it is, for lack of a better term, vanilla, Bor is still very fun. The leaping is on-point, with some variety added courtesy of long, short, and double jump options. Terraces and floating cubes are never too far out of reach like in certain Mario games, and the levels are short and engaging enough that they don’t drag and overextend their welcome.

There are issues with the menus and control overlay that I need to address. Bor claims it offers partial controller support, but I didn’t see any such option- in fact, there was no options menu, meaning you can’t adjust anything. When you exit a locale, you also have to go all the way back to the home screen instead of the respective world you were on. And while the AD/Spacebar controls work fine for moving and jumping, I did find the shoot button “B” to be kind of awkward. If you put your hands close together it works, but syncing the bounce button to “W” and the projectile one to the blank bar (or, you know, giving players a choice in an “options menu” to do their own set-up) would have been better in my opinion. These are all small complaints, but they do add up in the long term.

Lastly, Bor regrettably has a number of bugs that require polishing. In my playthrough I witnessed the following: action blocks not activating, Bor falling off-screen yet not dying, being unable to pick up/let go of throwable enemies, getting stuck on invisible barriers when walking, and other more minor things. A number of these are technically game-breaking, but because they weren’t a constant annoyance (and because the levels are relatively quick), they didn’t hurt my enjoyment of Bor as much as they should have. That being said, glitches like these are inexcusable, and should be patched out in the foreseeable future. 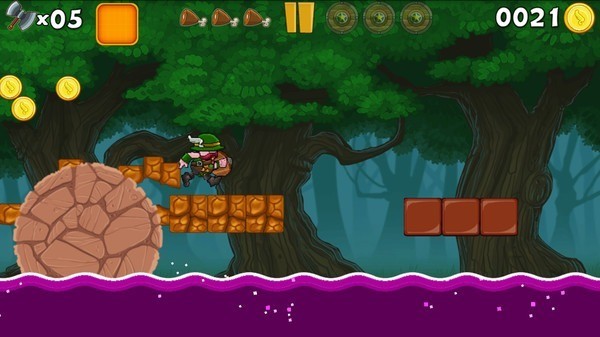 I’ll also say that, while this wasn’t a bug, there was a design feature that angered the completionist in me. See, Bor has collectables in the form of shields- there are three in each level, similar to the green stars in Super Mario Galaxy 2, and usually require you to go out of your way to retrieve them. My issue came with hitting the middle checkpoint- if you die after that, you lose all the shields you collected beforehand. It was irritating- imagine playing Donkey Kong Country and having to recollect the K.O.N.G. letters despite getting to the save barrel.

Overall though, Bor was entertaining and surprisingly addicting. I beat it in two runs, which took me about four hours. Granted, I was doing side stuff like getting the aforementioned shields or trying to find the secret levels (two in each zone!), but 3.5-4 hours is what I imagine most people will naturally do. If you want to add the secret areas and shield collectables, then you can increase that number by at least two more hours.

Either way, at a $7.00 asking price, Bor is appropriately valued and definitely worth your time if you’re a fan of platformers. 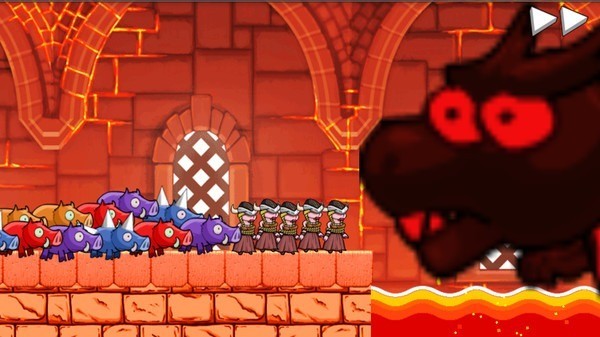 Note – The Steam page description says that you have to save 60 wives, implying 60 levels. The game I played had 48 base levels and 8 secret levels, bringing the total to 56. Perhaps 100 percenting all the content leads to 4 additional planes opening up for play, but given that I did not do this, I cannot verify whether that is the case or if this is simply a typo on the storefront.