Another month passes and the season changes, as does the Games with Gold.  As October ends with Halloween what better theme for the month’s games than that of horror with offerings ranging from the original Xbox to earlier this year. 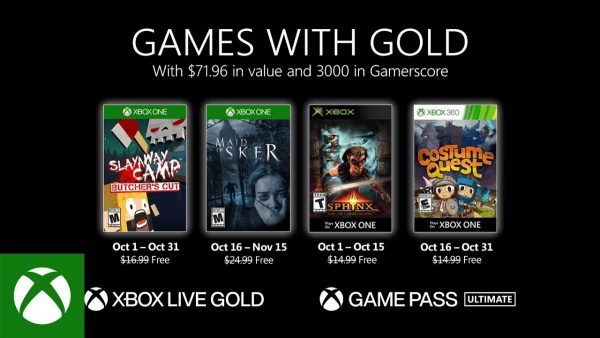 For the whole of October Xbox One players can enjoy killer puzzler Slayaway Camp: Butcher’s Cut.  This fiendish puzzler puts players in charge of Skullface as he hacks and slashes his way through over 300 levels.  Help Skullface as decapitates his way through isometric puzzle levels that pay homage to the horror movies of the 80s.  Don’t hold back with this psychotic killer’s wrath as his victims are all smart-mouthed, over-sexed, substance-abusing young adults, just like those Jason used to get rid of.

Also for Xbox One for the last half of the month is the first-person survival horror Maid of Sker.  This survival horror takes players to a remote hotel with a very bloody and macabre history where they will need to avoid the sinister Quiet Men.  Take the role of musician Thomas Evans and seek out your beloved, armed only with a defensive sound device Thomas must avoid these foes with super hearing.

The original Xbox game for the first half of October is Sphinx and the Cursed Mummy.  Take control of demi-god Sphinx and use raw power to get past enemies then team up with the mummy of Tutenkhamen to get past cleverly designed logical puzzles.

Rounding off October is the party-based RPG Costume Quest.  Take control of a child getting ready to celebrate Halloween with their twin when suddenly the sibling is kidnapped.  The remaining twin will need to travel the neighbourhood collecting various items and companions and fighting an assortment of monsters.  During battles with monsters the child and his companions will take the form of whatever Halloween costume they are wearing.

Looking forward to October’s games? Let us know on Twitter.