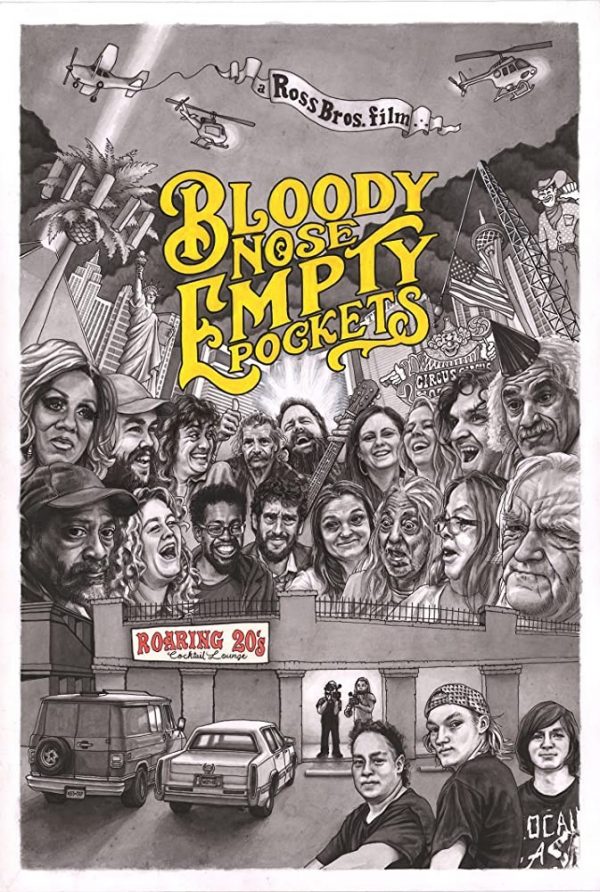 A look at the final moments of a Las Vegas dive bar called The Roaring 20s. 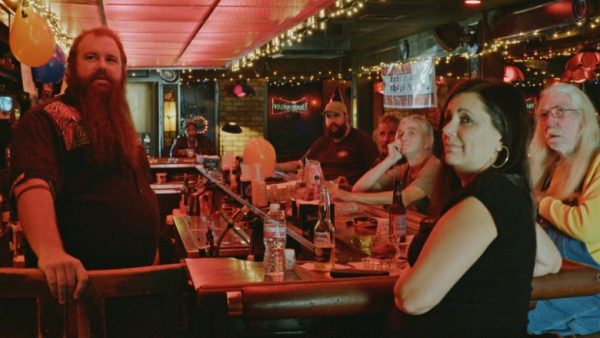 The term “slice of life” rarely applies more aptly than it does in Bill Ross IV and Turner Ross’s quasi-documentary Bloody Nose, Empty Pockets. Part-starkly observational portrait of strung-out barfly life, part-affectionate ensemble sitcom – think a scuzzier vein of Cheers – this formally bold, achingly human collision of fact and fiction holds a power quite intoxicating in its own right.

Almost all of the film’s 98 minutes take place inside The Roaring 20s, a Las Vegas dive-bar due to close for good the very next day. And so, the bar’s colourful cast of regulars gather for one final hurrah before their vestige of comfort sails off into the night.

The Ross Bros. kick things off in the early morning as scruffy philosopher Michael shows up to neck a shot before he even has his morning shave. Soon enough others join him, all of them shepherded through the day by the kindly, well-tempered, guitar-playing bartender Marc, later subbed out for single mother Shay during the night shift.

If the film seems awash in unfussed point-and-shoot footage, there’s also an impressionistic, even novelesque quality to what we’re seeing; a compulsive can’t-look-away factor to watching the pub slowly fill up over the course of the day and night, even while we wonder quite what we’re looking at.

After all, the camerawork is so uncomfortably intimate at times that it’s tough to question how the “participants” are so naturalistic, especially as they become more drunkenly belligerent throughout the night (and boy, they do).

Though there are certainly some sly giveaways to the movie’s central conceit – such as phone voicemail messages being unnaturally audible – the brothers nevertheless do a fantastic job concealing the fact that Bloody Nose, Empty Pockets is a staged-yet-unscripted play of-sorts, with the cast consisting of amateur actors who spent two nights getting asshole-wasted for real in a New Orleans bar hired by the directors.

Beyond the occasional technical contrivance, this is still mind-bogglingly plausible as a documentary, and despite its inherent “dishonesty,” retains a high level of emotional plausibility thanks to the efforts of its dynamic, hugely entertaining cast.

The naturalistic messiness of it all – perhaps alcohol-aided – the non-contrived dialogue, the soupy sound mix, and the frequently out-of-focus camerawork all add up to create a deeply lived-in aesthetic which shames practically every other mockumentary doing the rounds.

Anyone who’s ever spent a long night at a bar will find many of the sights therein relatable; the lingering glimpses of drunks staring lost into the middle-distance; a man so drunk he can’t even find the exit; and slurrings both nonsensical and surprisingly profound. 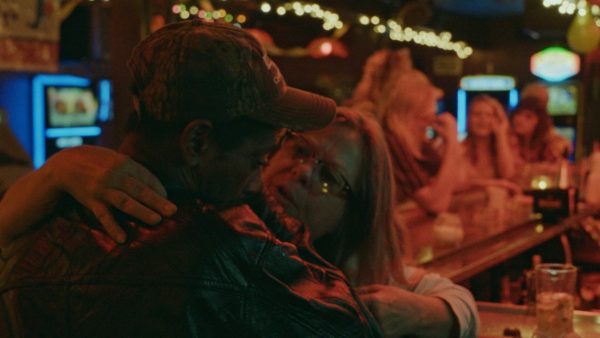 Michael in particular is the author of some memorable choice quotes about the meaning of life – especially its many failures – and given that the film was shot in 2016 on the eve of the American Presidential election, there are several delineated discussions looking ahead to the supposedly thin prospect of a Trump presidency. Oof.

As much as it might seem like a window into a slightly more innocent time, the film is more a sobering sit than a call for chugging contests. It strikes a rather bold note with its depiction of alcohol dependency, though, with the bar serving as a safe haven for these figures, most of who appear to be deeply troubled in their soul.

It’s easy to sneer or cringe at the goings-on, but the humanity over-spilling from each and every “character” makes it tough to judge, and on the odd occasion the film even manages to mine genuine hilarity from its ensemble.

An ingenious, unexpectedly poetic faux-doc experiment which proves no less truthful once its artifice becomes evident.