Herbert West, an eccentric but brilliant medical student, arrives at a new campus to embark upon a groundbreaking experiment; to re-animate the dead. HP Lovecraft, while never managing to achieve much success during his lifetime, is regarded by many as one of the most important and influential figures in horror fiction. His stories of mad scientists dabbling with the forces of creation or of godlike monsters powerful beyond all belief, having since become classics of horror literature. While his works have influenced numerous horror films, TV shows and games over the decades, direct adaptations of his work have yielded much more mixed results. However, the film that is often considered to among the best, if the best, Lovecraft adaptation is curiously enough based on a story the author supposedly hated. From the late cult director Stuart Gordon, it’s the gore-splattered cult classic Re-Animator.

Based on the short story “Herbert West-Reanimator”, the film follows a familiar story of a mad scientist with a burgeoning God complex who develops a serum that can seemingly resurrect the dead, ignorant to the horrific consequences that will arise from such an endeavour. With a story like this, the film could have approached the material with a serious mindset, crafting a meditative piece tackling weighty themes about life, death and the dangers of playing God. However, that’s not what Stuart Gordon and his co-writers decided to do. Instead, they saw the funny side of the story and decided to create a gruesome horror film that, while glancing at these themes, often did so with a knowing and wicked sense of humour. If I can sum up all that is wonderful about Re-Animator in two words it’s this; Jeffrey Combs. As Herbert West, the titular Re-Animator, Combs creates an eccentric, arrogant and loathsome protagonist yet one whose acid tongue, ghoulish sense of humour and engaging screen presence also make for a compelling anti-hero. Combs is brilliant in the role, commanding (and demanding) your attention in his every scene, dominating the film with his unique charisma.

The supporting cast is solid, with David Gale, in particular, standing out as the sinister Dr Hill, playing the role with Machiavellian charm, growing (and hilarious) megalomania and barely hidden sexual lust. The interactions between Gale and Combs are among the most entertaining moments of the film. The vicious contempt between the two making for riveting and, after an incident involving a shovel and resurrection fluid, revolting viewing. It’s Combs though who often has the upper hand, firing off barbs about Gale’s status and his being “not even a second rate scientist”. 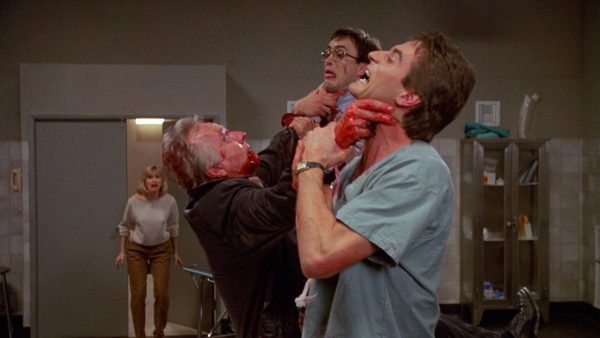 The tone for Re-Animator is very much in the vein of Evil Dead, a gruesome concoction blending shocking violence and gore with a knowing and dark sense of humour. The mixture works for the most part with the horror elements, while not scary, are at least horrific enough to make you regret having that big lunch before watching, with the shock of the violence counteracted by the quirky oddball characters and over the top nature of the gore effects.

While the horror and humour, for the most part, is so outlandish that it’s near impossible to be too disturbed, a scene involving a naked Barbara Crampton and the zombified head of Gale is a rare exception. It’s a short scene, but one that stands out as not sitting well with the overall silly tone of the rest of the film and, in my view, it could have easily been cut.

Although made on a low budget, Re-Animator boasts a plethora of impressive special effects that, while sometimes showing their age, manage to create creating a ghoulishly gruesome display. Packing in more than enough exploding eyeballs, crushed heads, popping veins and headless corpses to keep gorehounds happy and squeamish newcomers reaching for a bucket. 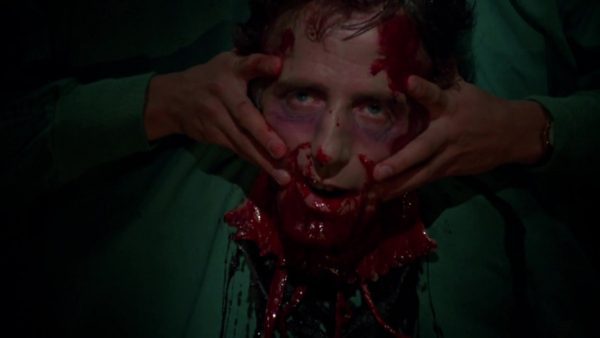 While the pacing can be sometimes uneven with a handful of slow patches, the film moves along at nicely and never overstays its welcome. The strength or weakness of the pacing is dependent on which cut you watch. The R-rated cut features more in the way of character development but cuts down the more gruesome gore effects. The shorter unrated cut, on the other hand, reinstates the gorier scenes, albeit at the expense of the character development. However, if you have the choice I’d go with the unrated cut, it’s much tighter pacing wise, the gore effects are uncut and, perhaps most helpfully, it’s the version preferred by director Stuart Gordon. While a version integrating both cuts together exists (albeit not in the US, based what information I could gather) you’re really not missing out on too much aside from what is, in my view, unnecessary padding.

Led by a magnetic and eccentric performance by Jeffrey Combs, wonderfully gruesome effects and a mischievous combination of horror and dark comedy, Re-Animator, while not perhaps to everyone’s tastes, is still a gory good time and among the best Lovecraft adaptations out there. Check it out.