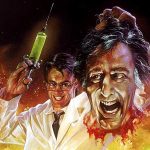 Tom Jolliffe double bills Re-Animator and From Beyond in honour of the late great Stuart Gordon… With sad news that another legend of film has departed this mortal coil, it seems apt to pay tribute to a horror icon. Stuart Gordon was known for a number of classic horror and sci-fi films. Fans have long […]

Fright-Rags has announced that it is re-animating the longstanding tradition of movie trading cards with a brand new series of House of Fright Wax Packs based on Stuart Gordon’s cult sci-fi horror Re-Animator! Each pack includes six collectible trading cards and one sticker. Cards hand-sketched by a curated selection of artists and cards autographed by […]

The 1985 horror-comedy Re-Animator is set for a modern-day remake, with director Serge Levin announcing to Bloody Disgusting that development is underway on a new film, titled Re-Animator: Evolution, which Levin has penned by actor Jonathon Schaech. “Our adaptation is a modern rendition of Herbert West – ‘Reanimator’ by H.P. Lovecraft,” Levin told Bloody Disgusting. […]