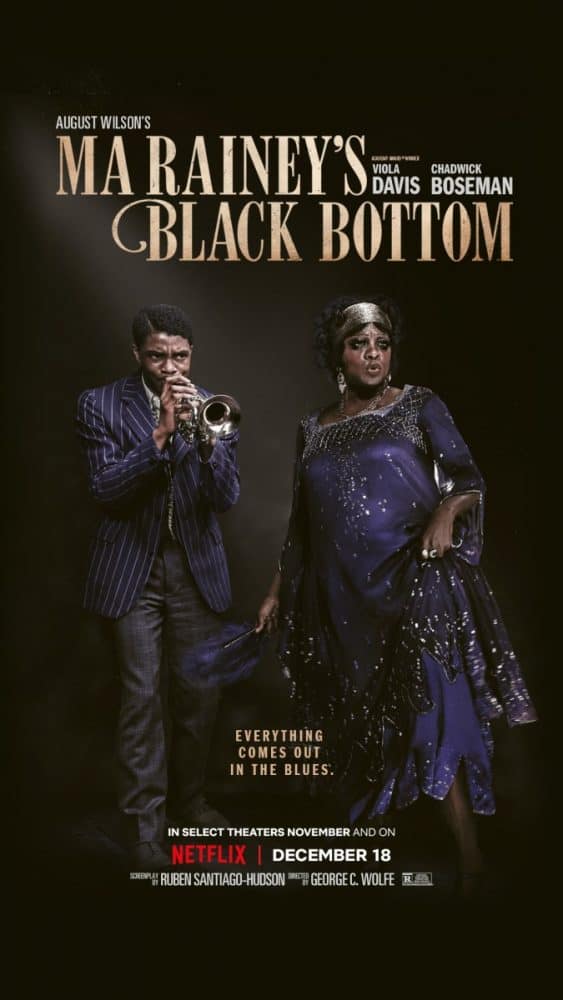 Chicago, 1927. A recording session. Tensions rise between Ma Rainey, her ambitious horn player and the white management determined to control the uncontrollable “Mother of the Blues”. Based on Pulitzer Prize-winner August Wilson’s play. 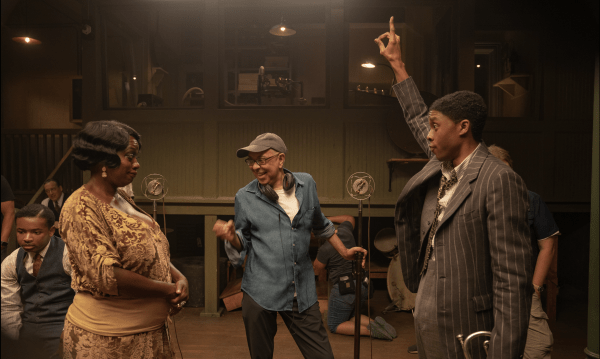 There are not one but two monologues in Ma Rainey’s Black Bottom from King Chadwick Boseman (RIP) dealing with death. In one of them, he’s bombastically taunting God to strike him down with lightning. Colon cancer might have struck him down in the end, but he didn’t go down without a fight or without leaving behind a legacy, and his role here as the cocky and ambitious horn player Levee cement that bestowal. The electricity lives on but not from God’s fingertips, rather Chadwick Boseman’s undying spark as an incredibly talented and compassionate human being.

Award-winning playwright/director George C. Wolfe centers Ma Rainey’s Black Bottom more on that driven musician more than the Mother of the Blues herself, but the clue is in the title. Written by Ruben Santiago-Hudson adapting the famous August Wilson play) is about the complications that arise from both white managers and recording studio owners trying to take control over her music and Levee’s own energetic and dance-inspired spin on the titular song. The other members of the band (played by Glynn Turman, Colman Domingo, and Michael Potts, each with their own distinctive backgrounds and personalities) all seem to have resigned to the fact that it’s Ma’s group and show, and that her way is what goes. That’s not to say they have no drive, but the juxtaposition is practically exploding through the screen thanks to the magnetic presence and irresistible charm of Chadwick Boseman. I know it’s a cliché to say, but the actor is more alive than ever before here 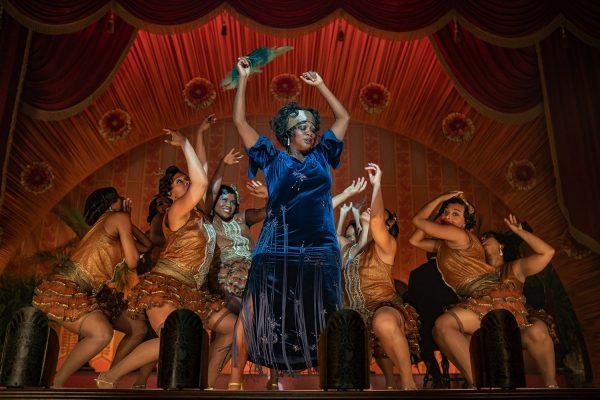 Then there’s Ma Rainey herself, introduced in a prologue showing off her Georgian roots and rise to stardom putting on tent-shows filled with pageantry and dazzlingly vibrant costumes. Played by a domineering Viola Davis (who is no stranger when it comes to doing justice to August Wilson characters or real icons), the narrative spits us into 1927 Chicago where she is set to record a new record that naturally includes Black Bottom. She’s late to the session (which gives us even more time to spend with the band reflecting on life and discussing dreams), and to some might initially give off a diva vibe.

That couldn’t be any further from the truth, as she’s really a fiery trailblazer determined to hold onto her artistic integrity and control without letting the white powers that be dictate the specifics of her music. She knows these people (aside from maybe her manager Irvin played by Jeremy Shamos, who doesn’t give much resistance to her demands but nonetheless seems like he sticks around solely for the payday and guaranteed success) couldn’t give less of a shit about her, the blues or Black livelihoods. To these people, she knows she is nothing more than a money-printer that they will try to screw over at every turn. In that sense, it’s easy to cheer her on when she refuses to play over these cheapskates not having a requested refreshing Coca-Cola ready for her during this sun-drenched day of recording or insisting that her stuttering nephew Sylvester (Dusan Brown) perform the opening to the track. 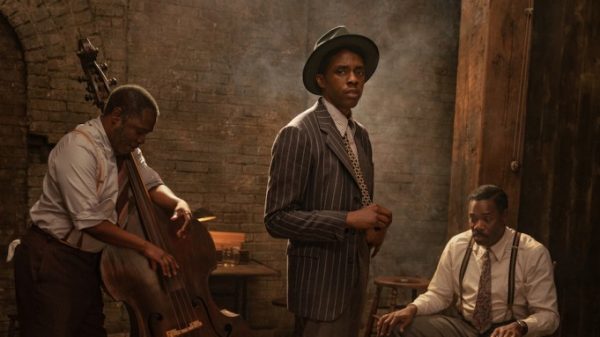 Also present is her younger romantic companion Dussie Mae (Taylour Paige), who comes across as the only character that feels underutilized; to Ma, its enlightenment that she was, at the very least, bisexual, whereas to Levee’s she serves as something else to pursue. There’s usually a sensation that her involvement is building to something bigger that never comes. Some might find the age gap a bit jarring, but then again Viola Davis is in her 50s playing a historical figure during a time when she wasn’t even 30, so do with that information whatever you will. As far as I’m concerned, Viola Davis looks, sounds, and crushes the part which is all that matters.

For Levee, these racial anchors are a lesson waiting to be learned, even if he does seem to have the wherewithal and confidence to ensure he doesn’t get used by a manipulative system. He even gets to tell a painful story from his past that reassures us he is aware of what white people really think (this is also one of about five different scenes you could use for Chadwick Boseman’s Academy Awards clip). In that regard, Ma Rainey’s Black Bottom juxtaposes naivety and cynicism to necessary extreme degrees, closing out a note of heartbreaking tragedy. 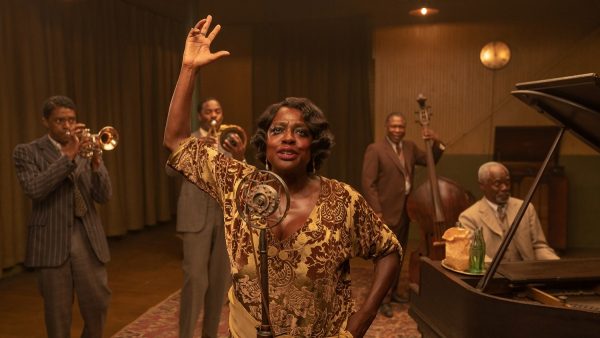 Again, for adapting a stageplay the filmmakers have outdone themselves with lavish production design, a color palette complementary to the wardrobes, striking musical performances, and nuclear heat behind the debates and varying perspectives of each band member. Of course, occasionally that kind of presentation can work against the pacing, but the movie is also a brisk 93 minutes lining up each shot and piece of dialogue with flair. Ma Rainey’s Black Bottom illuminates complex racial issues inside and outside of the music industry, matching the infernal passion of Chadwick Boseman and Viola Davis.