Ricky Church reviews the fourth episode of The Expanse season 5…

After the shocking cliffhanger The Expanse delivered last week, the series did not lose any momentum as everyone in the system felt the fallout and Belter terrorist Marco Inaros rose several notches to become the series’ arguably most compelling villain. Everything about ‘Gaugamela’, from the tense action, multiple stories, direction and character work was firing on all cylinders. Even though we’re not even halfway through the fifth season yet, the episode may go down as not only the best of the season, but one of the best episodes Expanse has ever produced. 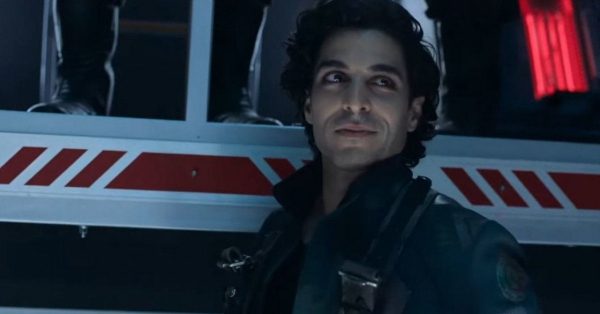 Rather than jump into the devastating events of the asteroid hitting Earth right away, ‘Gaugamela’ instead built up the tension a little more as it followed characters who were somewhat on the periphery of the main storyline. Alex and Bobbie shared a nice moment together on the Razorback – now renamed The Screaming Firehawk – as they followed Martian warships and discussed the dying dream their people had of terraforming Mars. Alex’s disbelief versus Bobbie’s realism created an interesting conversation between the two on how to cope with what Martian officials were doing. Frankie Adams gave a nice performance as she related a story from Bobbie’s childhood while back on Earth Amos visited the incarcerated Clarissa. Nadine Nicole’s return showed a very different Clarissa and she displayed her newfound vulnerability well. Nicole and Wes Chatham had some very nice chemistry together. It’s not very often Amos opens up about his feelings or philosophy, but when he does Chatham knows how to channel that side of the character and make it authentic.

From there, no time was wasted in stressing how terrible and game changing the asteroids’ impact on Earth was. One was bad enough, but the second strike made it even worse as it delivered a hard blow to the gravity of the situation. Avasarala hasn’t been this panicked since late Season 2/Early Season 3. Her usual calm and confident demeanor cracked significantly as she was absolutely powerless to stop the strikes. It’s almost a broken record, but it can never be said enough how strong Shohreh Aghdashloo’s performances are. She perfectly sold how much Avasarala was on the edge of despair, especially after the third strike took out quite a number of the UN’s leadership. From the way everyone else in the system was reacting to the newscast of the events, strong parallels can be made to real life events where it seemed the whole world was frozen in one moment, taking in their shock and grief together. Though the destruction wasn’t seen firsthand, it didn’t take away from the scale of the devastation due to the those reactions from people on or around Earth. A view of the damage done to the planet is sure to come in some of the next episodes as Amos and Clarissa are stuck on Earth and very likely in or near ground zero. 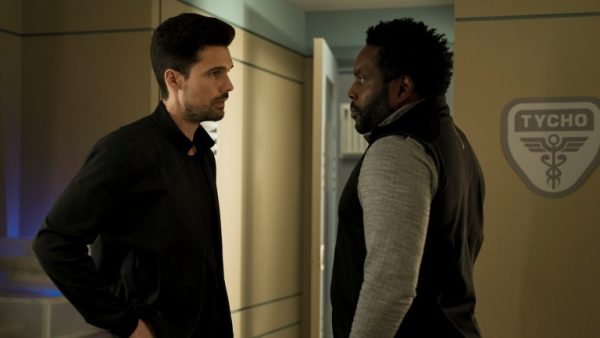 If the asteroid strikes weren’t already enough, there was plenty of action on Tycho as Holden and Fred Johnson enacted their plan to capture their conspirators. It devolved into quite a gunfight though as they were betrayed, leading to even more shocking devastation as Inaros’ people assassinated Fred and stole the last remaining protomolecule sample. Johnson was a major player behind the scenes and an important ally to Holden with Chad Coleman always playing him with grace and confidence. His unexpected and somber death was a huge loss which only underscored how much of a dire situation the people on Tycho were in. If his passing wasn’t enough, the theft of the protomolecule made it worse and Steven Strait’s reaction to seeing it getting taken was perfect in telling us how horrified Holden was.

Which leads us to the ringmaster of all these events, Marco Inaros. ‘Gaugamela’ above all else spelt out how dangerous Inaros really is as he displayed his cunning, manipulation and self-righteous morality in the final minutes of the episode. He has really stepped up to be one of the series’ most compelling villains due in no small part to Keon Alexander’s performance. He captures Inaros’ subtle manipulations and devotion to his cause very well, particularly in his fiery speech to the system declaring his leadership and claim to what he believes he and the rest of the Belters are due. His reunion with Naomi created a good amount of tension as there was uncertainty over what he would do with her, but his attempt to gaslight her was a sign of his intentions. One particular moment which stood out was, despite his pride in Filip’s actions making their plan come to fruition, he couldn’t help but undermine Filip – right in front of him no less – as he commented on the surprise of Filip’s kidnapping of Naomi by saying “I thought he was a man, but I guess every boy needs his mother.” What made it stand out even more was Filip’s nonplussed reaction to his father’s insult, showing how blindly committed he was to Marco. Again, Alexander did an excellent job showing how a person like Inaros built a terrorist group out of a cult of personality and charisma while displaying he is so dangerous because he believes everything he says about the Belt’s right to rule.

‘Gaugamela’ may very well go down as the standout episode of the season for the way it brings all its plots together and raises the threat level of Marco Inaros. The cast gave very fine performances throughout the episode while the weight of the devastating events was not lost at all. Without a doubt, it cements how this is shaping up to be a great season of The Expanse.