Jagex has announced the launch of the first instalment of ‘Once Upon A Time’, the multi-part anniversary storyline celebrating the 20th anniversary of the hit game Runescape.  Titled Foreshadowing, is the first stage on a year long adventure that will see players meet both allies and antagonists that will help establish the adventure’s story into the game’s past, present and future. 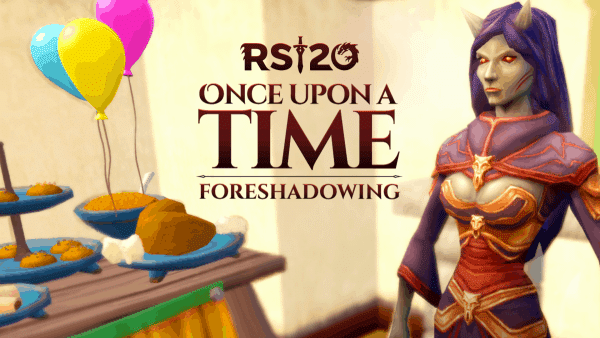 One of the characters adventurers will encounter is Relomia, an emissary of the now deceased Sliske.  With her idol no longer alive to direct her and no further ambition she is attempting to find her place in a world that seems alien to her.  As well as new faces, players may also recognise a few familiar faces as Relomia’s adventure unfolds.

Those adventurers who manage to complete Foreshadowing will will reward them with a type of hat called ‘Romalia’s Party Hat’, which pays a endearing tribute to the highly coveted Party Hat.

It is now 20 years ago since players first ventured into the medieval fantasy world of RuneScape and in that time the game has been updated with new storylines, content and more over 1000 times.  During these past two decades the game has seen almost 300 million players make an account and dive straight into a world of unbound adventure. If you are one of those players who has taken a break from the hit MMO then this year long anniversary event is one that may encourage you to revisit.#

Twenty years of development makes for a lot of lore for any game, join the developers in the video below to learn more about Gielinor.

The anniversary starts now in RuneScape and Old School Runescape.