EJ Moreno looks back on the 2001 slasher film Valentine… 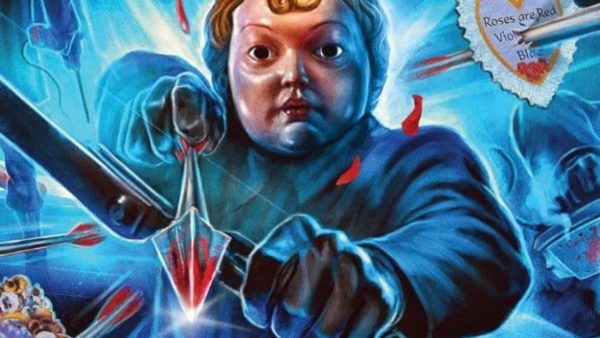 The slasher genre reigned as the horror go-to for decades. Starting sometime in the mid-70s, slashers films dominated popular culture with iconic killers, casts stacked with beautiful people, and insane kills. This trend would last till around the early 90s when the golden-era of Michael, Freddy, and Jason winded down. Scream would re-invent the genre and give it new life, spawning so many copy-cat slashers in its aftermath.

Here, we would see our Urban Legends and our I Know What You Did Last Summer-type movies. Hell, even killer doll Chucky would get a late 90’s makeover. This would go on for a little while, dying out until the remake era that dominated all of the 00s. In that time after 1996’s Scream and before the 2003 Texas Chainsaw Massacre reboot, you could see various mid-tier slashers pop up. One of those are celebrating a twenty anniversary this year: let’s dive into 2001’s Valentine. 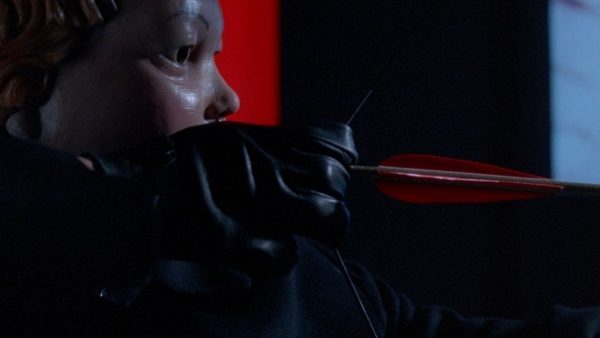 Coming from Urban Legends director Jamie Blanks, Valentine follows a female friend group dealing with a killer haunting them for their past sins. With his cherub mask, the killer finds ways to taunt the women and slash them one-by-one. It featured a cast of popular 2001 actors like Denise Richards and David Boreanaz, a director with genre experience and a decent slasher premise. The pieces were there to make the 00s first great slasher film but wouldn’t have such luck.

Valentine was met poorly by audiences and critics in 2001 and hasn’t really found a resurgence in “is this good” opinion pieces that so often save hidden gem horror films years later. Looking back on the film now, you can see what went wrong and why it felt like the last hurrah for slashers. It’s a bit cliched, filled with some very bland walking stereotypes, and doesn’t pack any memorable kills. But digging deeper and upon a rewatch, there’s a bit more to Valentine than I initially thought. 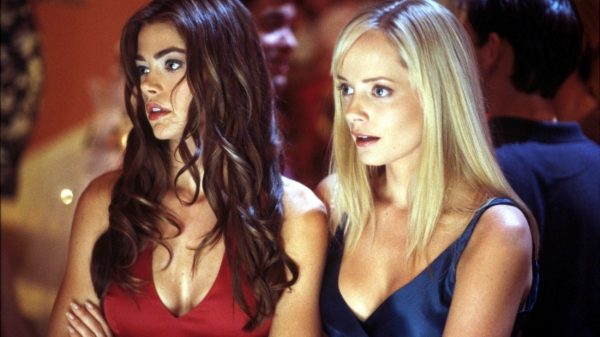 Look, I’m not here to herald this as some untapped classic we all most watch, but the film has a layer to it that makes it a fascinating watch. As we enter cinema in the first few years after starting the “Me Too” era, it’s always noteworthy to find moments of women being very blunt about their issues when dating and dealing with a particular type of cruel man. Most slashers have a relatively even split when it comes to the gender of its cast; Valentine does not. Besides the killer and a few disposable male meatbags, there’s a predominantly female cast. Not the first slasher to do this – Black Christmas would do this in 1974 – but it wasn’t as common as you’d assume.

Notable horror critic Heather Wixson spoke on the film’s female point-of-view while revisiting the film in 2019. Wixson notes that the film “taps into these intriguing female characters and relationships as well, especially at the turn of a new century when there were only the inklings of where our society was headed.” The film is heavily focused on women, and yes, it does get a bit “soap opera-y” at times, there’s still something people admire and see as being progressive here. 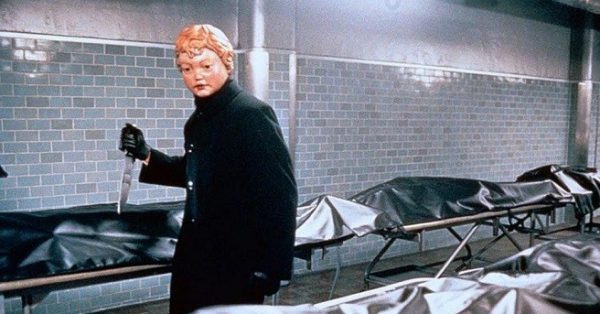 Digging deeper into the film, you start to notice that it feels like a real slasher mystery, something I think many post-Scream entries forgot. I Know What You Did Last Summer barely allows you to play detective alongside it, and franchise films like Bride of Chucky and Halloween: H20 was long past the days of attempted mysteries.

Valentine has some mystery and intrigue to it. There’s no confusing this with a Giallo-level of murder/mystery, but I appreciate the film for trying to have a whodunit plot filled with red herrings and a “gotcha” ending. You meet a plethora of characters, and while most are meaningless, it’s still enough fodder to make you question if they could do it, just for them to get hacked to bits a few moments later.

SEE ALSO: Urban Legend: The Last Slasher of Its Kind 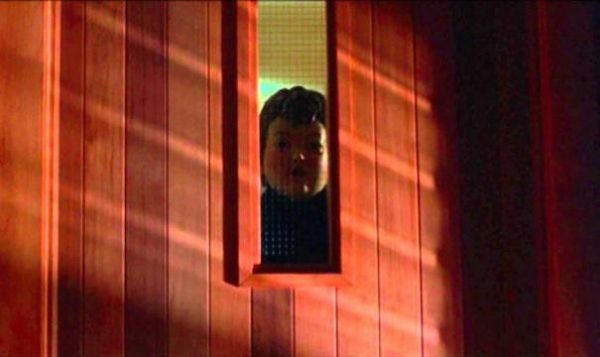 I go back to films like Scream 3, released around the same time, and that has such a horrid killer reveal that I long for something as interesting as this one. Again, it’s not ground-breaking and straightforward to call, but the film doesn’t treat you like a moron or doesn’t try to do this added bit of insanity to make up for its lackluster unmasking. Here, we get a layered ending that’s somewhat expected, It doesn’t try to act like it’s breaking any new ground, but it still holds up to this day.

One of my final points, and probably the most superficial of them, is how much I enjoy our Valentine slasher look. His signature look and weapon recognize a great, iconic slasher villain. While our masked killer here does play with different means of killing someone, it’s undoubtedly that cupid’s bow and arrow kill that stands out. Honestly, if that made all the kills, this would rank even higher as that’s a unique method of disposing of bodies. 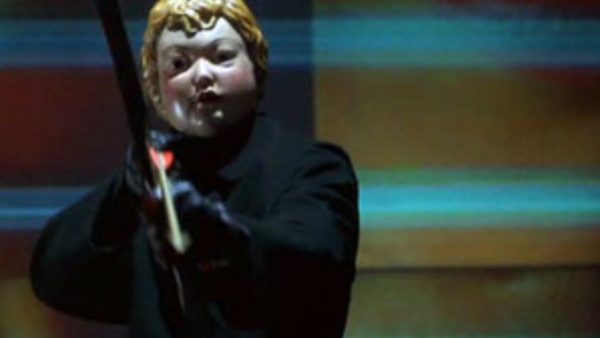 No, where Valentine shines in the aesthetic department is the cherub-faced mask. What a striking look, and something I honestly wish we had more of in horror. I don’t know if I wanted an endless amount of sequels to this original film, but it’s a shame such a good look was only used once. We got two films with that horrible baby mask from Happy Death Day, but only one with such a chilling mask like this? Make it make sense to me.

Landing on an iconic look in a horror movie is vital. If it’s a signature screaming face or the mask used by the killer, you have to be memorable in this genre. No matter what you may feel about the film as a whole, you can’t deny Valentine has a unique look. A clean black coat with that blank angelic face: it’s everything you’d want. Looking at its peers like Urban Legend and I Know What You Did Last Summer, those feel so been there, done that. Hooks and axes with a hooded figure aren’t as shocking or enjoyable as our angel killer. 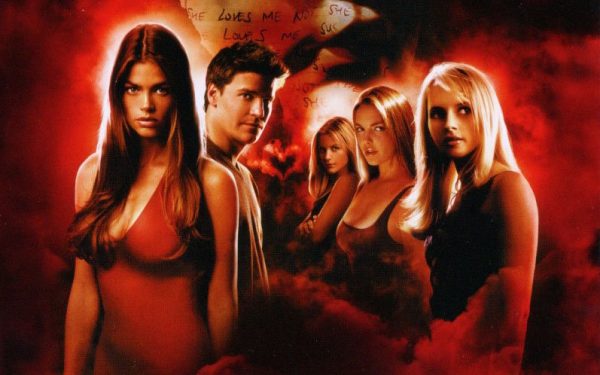 This piece’s recurring theme has been saying, “look, it’s not that bad” concerning this movie. And I think that opens the conversations for accepting the middle-of-the-road films and not looking at things on this g00d/bad binary. Valentine is delightful, especially when cuddled up with some friends on this upcoming holiday.

You’ll laugh at the plot holes, cheer when the morons get offed, and of course, enjoy the early 00s stylings of everyone involved; honestly, this could be top-tier Galentine’s day viewing if you want.

Looking back at the dying days of the slasher genre, it’s not shocking to see it make its mini-comeback these days. Films like Valentine still offered up enough enjoyment that shows we had more fun to be had in this genre.

SEE ALSO: The Most Obscure and Underrated Slashers of the 1980s