Tom Jolliffe looks back the emergence of Jim Carrey, who ruled comedy from the mid-late 90’s… 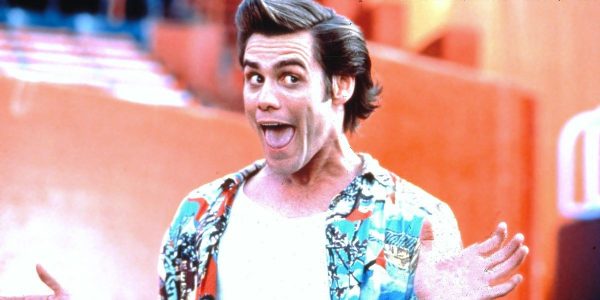 It was 1993/94. I was at the cinema to see a film with a friend. For the life of me, I cannot remember what film it was. It was something comedic, but by the time we came out of sitting through a film that held little interest, we could only talk about one thing… Ace Ventura: Pet Detective. It was just a trailer. It came on prior to the film that I now cannot recall and it blew my 12 year old socks right off. Same goes for my friend. We sat, watching this trailer and were in hysterics. I’m talking laughter to the point of pain and tears. Okay. Just let me remind you, I was 12, but even in the 90 seconds trailer for Ace Ventura, we’d experienced a comedy revelation. We’d just been introduced to the rubber faced/limbed antics of Jim Carrey. It was all we talked about when we got home.

Back at that time, pre-internet, it was rare to get advanced warning of an impending film. Some were a given. Me and all my little mates were well prepped for Jurassic Park by the time it came out. We spread word through playgrounds and siblings, for this impending comedy gem, destined to be a masterpiece (to a 12 year old boy anyway). A few months go by of quiet wonder, and then I get wind the film is out. We went back to the cinema and this time we didn’t forget the film we’d actually gone to see. Ace Ventura to me, felt something akin to discovering fire. I’d seen physical comedians before, but never quite like this. Additionally the film was perfectly catered to the sensibility of a boy shifting closer to teenage years. The themes more mature, the material decidedly more crude. Okay, let’s just say it right now, Ace Ventura has aged horribly in places. It comes across as transphobic and homophobic. It’s of its time, revelling in jokes about how bad it is to change sex, or be a man kissing another man. 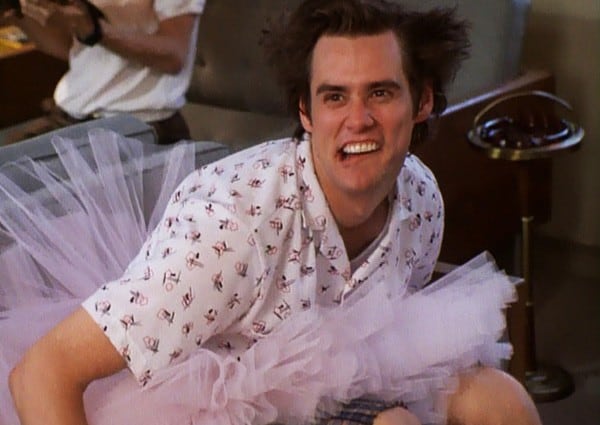 Still, in 1994 this was standard comedy material. It was the set up for many a punch line, but as opposed to a throwaway gag it becomes a central plot point for a finale that has become cringe-worthy. Back then, the film to myself and friends, was a non-stop barrage of over the top rubber faced hilarity. Carrey, completely unrestrained, just assaults the audience with over the top gags, both verbal and physical. A litany of ridiculous situations. The cinema became church, and for a year in particular, Carrey was God.

Now, whatever Carrey was going to deliver, we were going to watch. He delivered The Mask. On paper, it was a little more family friendly. It was a special effects driven fantasy, which saw Carrey as a bumbling bank worker, transformed into mischievous hero after finding Loki’s mask. It was filled, like Ventura, with loads of gags, silly faces and repeatable lines. We were still quoting his previous film and now we were quoting this, doing impressions, trying to contort our faces into the same expressions as Carrey could. The Mask would become another hit among audiences, particularly my age. 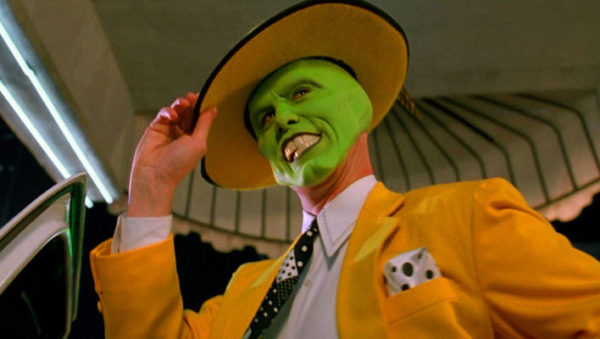 The next film for me would feel almost as revelatory as Ace Ventura. The timing was perfect. Around a year after my introduction to Carrey, Dumb and Dumber finished off that impressive breakout run. This definitely felt more crass, aimed well and truly at a teen audience, where the unrestrained theatrics of Ventura definitely felt hilarious to 10-12 year olds. Dumb and Dumber felt even naughtier. When this was out I was 13. When you’re young it feels like this a jump, a rite of passage between 12 and 13 and the playground reflected that. I’d been watching material above my age in any case and had been drawn to it, but now I felt as if I belonged. The combination of Carrey and the Farrelly brothers back then also felt like a perfect match. The distinctly un-pc nature of their comedies offered a great platform to put Carrey’s brand of physical comedy. Gags flew, revolving around bilking blind kids out of money, peeing on each other, poisoning (and subsequent explosive diarrhoea) and odd sexual fantasies. Other humour was plain goofy and certainly appealed to the maturity level of the audience who most appreciated it. As far as a string of the Farrelly films after this, Dumb and Dumber has aged better (compared to Shallow Hal for example). It has it’s moments, but gets a pass, whereas it’s harder to overlook the transphobia in Ace Ventura now for example. 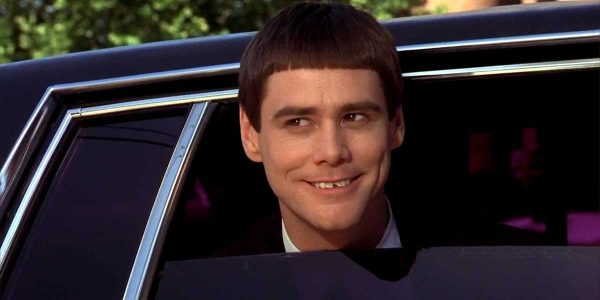 Carrey gave us an Ace Ventura sequel later that year too. It’s not aged too well in places either, though remains unshakably hilarious in places, not least when Carrey is birthed out of an animatronic Rhino in the nude in a sequence only Carrey could have pulled off. Carrey then became the selling point in Batman Forever, particularly for fans like myself. It came at a point where Carrey would mix his tried and tested with attempts to do something a touch different. The divisive The Cable Guy was a love/hate affair for many, but I found it pretty enjoyable back in the day. The dark theme and slight change of pace was welcome, and it still had enough unrestrained ham from Carrey to entertain. Liar Liar again mixed low brow humour with over the top physical comedy and plenty of quotable lines. There seemed a distinct push to add heart to proceedings, with a final act that attempted to bring an immoral character back to morality. Whilst it would be a tad maudlin, Liar Liar had enough hilarity to entertain me. By the time Carrey was making Me, Myself and Irene, his routine was wearing thin with more mature audiences, and his family films weren’t as compelling to the new generation of 10-13 year olds. That film was entirely unrestrained and left political correctness at the door. The themes we no more mature, but certainly more adult and revolving a lot around bodily functions. I first watched that on the big screen, by which time I was now an adult. 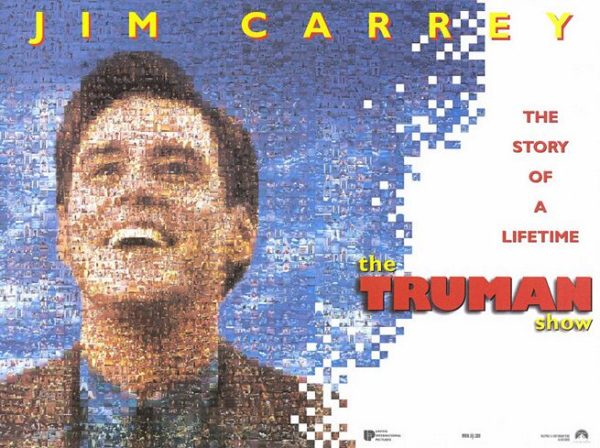 Carrey had hit something of a cross roads coming into the new century though. The Truman Show provided proof he was more than just a face pulling prat faller, as did his performance as Andy Kaufman in Man on the Moon (as perfect a piece of casting as you’re likely to get). I was growing with Carrey as a performer when he peaked in 2004’s Eternal Sunshine of the Spotless Mind. Melancholic and quirky, Carrey delivered his most restrained and complex performance (and to date, probably still is). The low brow comedies would never quite feel as fresh. Times were changing and likewise, Carrey seemed bygone in an era where the Apatow formula was more successful. As a performer Carrey was jumping between family films, the old style physical comedy and attempts to push himself dramatically but he was misfiring regularly. I had an epiphany whilst watching Mr Poppers Penguins, that I’d outgrown Carrey the physical comedian, and that films along the level of Eternal Sunshine were more interesting to see from him (but weren’t being repeated).

Carrey’s persona has seen a marked change in more recent times too and as divisive as he can be, he’s proven himself something of a complex and interesting individual. His villainous turn in Sonic the Hedgehog showed, under the right setting he can be a comical force to a young generation well into the 21st century and Kidding is a confident mix between the ‘actor’ and the ‘performer.’ To me though, I will have a long standing nostalgia for those few years when it felt like Carrey had re-invented the wheel.